Where they make it: Mopar plants and what they’ve made before (Memory Cards series)

This page lists current factories, what they make, some key products they used to make, and what we expect them to do next. 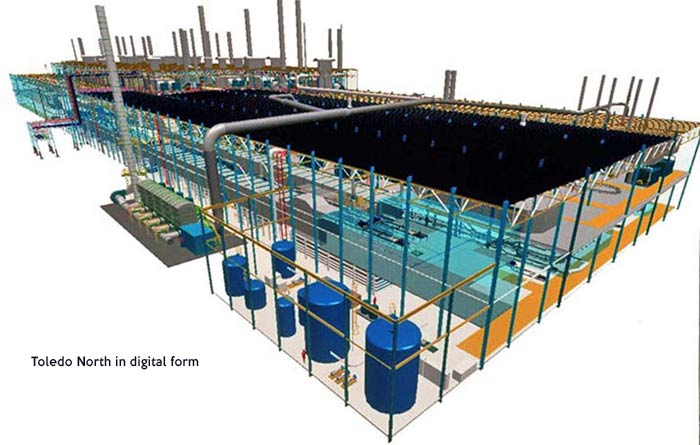 These are our projections, so far.

WGE. World Gasoline Engine. Based on modified Hyundai blocks, DaimlerChrysler built twin Dundee plants to make these for Mitsubishi, Hyundai, and Chrysler (all three shared some development along with Mercedes); however, Mitsu and Hyundai developed their own engine dressings and related systems and Chrysler shut down one Dundee plant. This is almost certain to be shut down in 2022-2024 depending on when ProMaster City switches over.

GSE. Global Small Engine. 1.3T and 1.5T; 1.5T not yet used in USA, only used in hybrid form. Both GME and GSE were developed by a team drawing from Chrysler, Fiat, and Fiat Brazil, and have elements of the old Neon engine, the Pentastar and Hemi, and the old Fiat FIRE engines.

Pentastar. 3.2 liter V6 expected to end production in summer 2023. 3.6 expected to continue on for some years to come. One twin turbo variety was developed from the basic Pentastar design by Ferrari and is used in Maserati Quattroporte and Ghibli, with 404 hp. The inability to get more power from the Pentastar twin turbo even with Ferrari’s budget is likely what killed plans for turbo Pentastars.

ZF based transmissions are the 9-speed and 8-speed automatics. 8-speed is entering a second generation with more hybrid capability. Both are made by Chrysler as well as by ZF; Chrysler versions have some differences either for truck capability (e.g. more serious parking pawl) or for manufacturing differences. Chrysler transmissions meet the same standards and specs as ZF ones.

The former home of the Neon switched over to making the Caliber, Patriot, and Compass—one of the few serious flex manufacturing projects attempted under Daimler—before making Darts. When Sergio Marchionne decided to repurpose Chrysler plants for a new SUV-centered world, he moved the Jeep Cherokee from Toledo over to Belvidere, and it’s been there every since; but many believe that in mid-2023, the plant will start making electric vehicles, possibly including a replacement for the Cherokee but almost certainly including the Chrysler Airflow.

Belvidere started cranking out Dodge and Plymouth cars in 1965, adding Chrysler in 1973; in 1977, they switched over to front drive, making the Omni/Horizon and its derivatives into 1987. Starting in 1988 they went upscale with the Dynasty, New Yorker, Imperial, and Fifth Avenue, which they made until 1993. The first Neons rolled off the line in January 1994, and kept coming until 2005. Oddly, though the Dart and 200 were on the same platform, they were not made together; the Dart came from Belvidere and the 200 from Sterling Heights. Cherokee production started in 2017.

This plant in the Bramalea section of Brampton, Ontario, has made the Chrysler 300, Dodge Challenger, and Dodge Charger for those cars’ entire lifespans (not counting the original 300, Challenger, or Charger); it was also sole home of the Dodge Magnum. It’s expected to keep on pumping out Chargers and Challengers in their new generation.

Built as “Bramalea” (the name of the development it’s in), the Brampton plant was put up by AMC just before Chrysler bought the company. It made the Eagle Premier, an AMC-developed version of a Renault which did not live up to expectations, from 1986 to 1992, joined after a time by the Dodge Monaco (a badge engineered car). From 1992 onwards, they made Chrysler’s large cars—the LH series until 2004, then the LX and related models, including the Lancia Thema.

The former spark plug factory that went on to build Vipers is now home to part of Chrysler’s car collection, and is used for meetings and education.

The Mack Avenue complex was a pair of engine plants, right next door to the new Jefferson Avenue assembly plant, which has always made Jeep Grand Cherokees (an older plant nearby no longer exists); the Conner Avenue plant that made Vipers is now a corporate event center and internal museum. Mack was created to make new Jeep Grand Cherokees, and it does so; Jefferson has continued to make the old Grand Cherokee and Dodge Durango. If anything else is planned for the new Grand Cherokee platform, it will likely be made there as well.

The original Jefferson Avenue plant was built by Chalmers in 1909; Chrysler took it over along with Chalmers, finally closnig it in 1991. The Jefferson North plant was put up nearby in 1993. The Mack Avenue plants include one created by Briggs Body (the former Mack I) and another made by Chrysler for engines.

There are two plants in Toledo, the South one making Gladiators (originally also making Wranglers), and the North plant making Wranglers. These are relatively new assembly plants, surrounded by a supplier park, and parts are run by other companies. 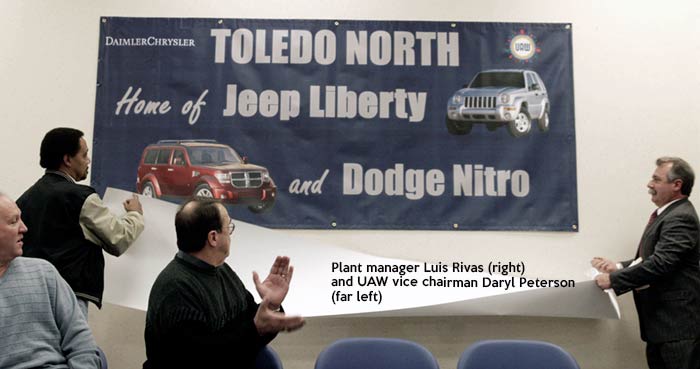 Toledo North was created to make the Jeep Liberty, designed to be the next generation of the Jeep Cherokee. (When the Cherokee proved to still be popular, they renamed its replacement.) Liberty went into production in 2001; Nitro was added in 2014. They were replaced by production of the new KL Cherokee, and in 2017 by the Jeep Wrangler, with Cherokee moving to Belvidere. Toledo South has always made Wranglers or Gladiators, since being built in 1986 to replace the old Willys plant in Toledo.

Toluca has in modern times gone from making Neons to PT Cruisers, and then Journeys and Fiat 500s; today it makes the Jeep Compass, which shares a platform with the Renegade (made in Italy). During the early 2000s, Toluca was one of DaimlerChrysler’s highest quality plants. It was built in 1984 to make K-cars; it made offshoots of the K from 1987 to 1994, when it went to Neons and was the only home of two-door Neons. The PT Cruiser displaced Neons in 2001; Journeys joined the line in 2008 and stayed on until their end. Fiat 500 was added in 2011, leaving in 2017. The Toluca plant is the furthest former-Chrysler factory from Detroit—Saltillo is close to the border.

A historic plant which has been expanded numerous times and gutted several times since 1980, Windsor is a modern plant using a flexible pallette system which raises and lowers vehicles as needed. Windsor makes all of Chrysler’s minivans, as it did in 1984. The Windsor complex used to have five separate facilities pumping out cars, trucks, and engines, but it’s all come down to one minivan factory. The last of the older facilities, at Pillette Road, made vans. For a full history of Windsor, see our pictorials. 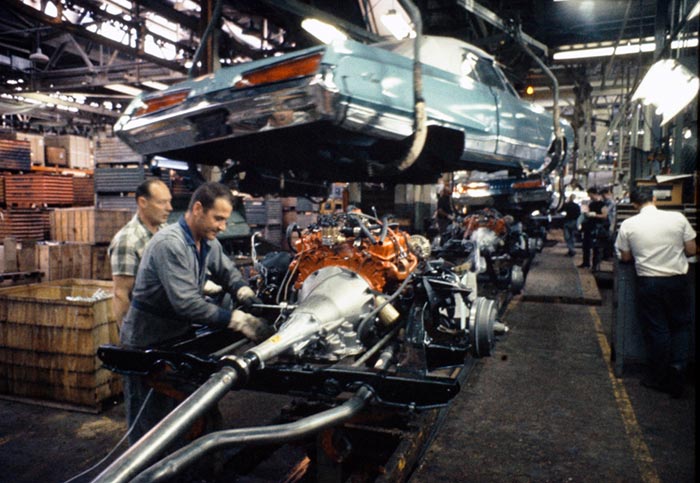 FCA US has three truck plants. Warren is the traditional American facility, and currently makes the luxury Wagoneer and the low-end Ram 1500 Classic, in what can best be described as irony. Sterling Heights was converted from making midsized cars and now makes the “DT” body Ram 1500 Quad and Crew Cabs; its capacity is quite high, with a massive new body shop. Finally, the Saltillo complex makes all the heavy duty trucks and chassis cabs, including one unique to Mexico; a separate building produces the Ram ProMaster; and an on-site engine plant makes every Hemi V8 and Hurricane inline six.

Warren Truck has made Dodge or Ram trucks and Dodge B-vans from 1938 to the present, including the Dakota, Mitsubishi Raider, and Ramcharger SUV. The Jeep Wagoneer joined the crew in 2022. Saltillo was originally meant to replace Lago Alberto, a 1930s era factory; it was opened in 1995. Surprisingly, the plant has a zero discharge policy and through filtration provides a surplus of clean drinking water which is used by local residents. Waste is treated on site.

Sterling Stamping used to make K-based cars such as the Lebaron GTS, Shadow, and Daytona; it went on to make midsized “cloud cars” (Cirrus, Stratus, and Breeze) in the 1990s, and continued to make midsized cars until 2017, when the Chrysler 200 was dropped. The factory was heavily rebuilt with a new body and paint shop when the 200 was brought in, and converted over to truck manufacturing in 2017-2018. 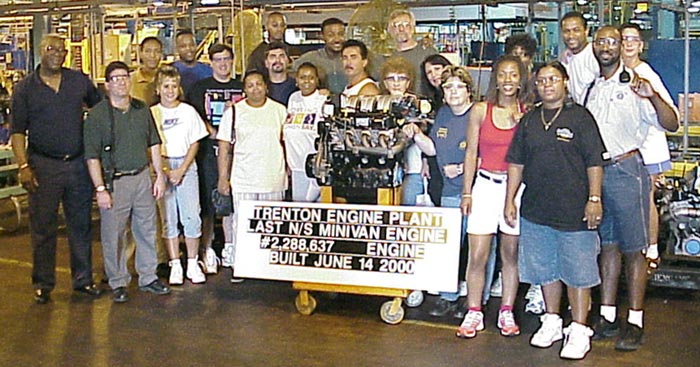 The oldest engine plant is at Trenton Engine, which has an old and new building; they make three varieties of Pentastar V6 and a multitude of parts. Trenton Engine is a decent drive south of Detroit, served by rail and highway, and right on the edge of a nature preserve; it’s also quite close to Grosse Ile.

Moving south, Saltillo, again, makes every Hemi and the Hurricane, as well as two varieties of Pentastar (PUG and PHEV) in a separate facility.

Then there are the new plants: Dundee, built under Daimler, which makes 2.4 liter engines (now in danger of being dropped) and the 3.6 liter Pentastar PUG. The new 2.0 liter engines are made at the newest plant, in Kokomo—formerly the Indiana Transmission Plant II. 1.3 liter engines are imported from Europe.

There are four stamping facilities: Warren, Sterling, Toluca, and Saltillo. Each is near an assembly plant. Warren and Sterling Heights are off Van Dyke Avenue, a reasonably short drive from Detroit.

There are also three other support plants—Etobicoke, which makes powertrain components and aluminum die castings; Toledo, which makes steering columns and torque converters; and the beautiful Mt. Elliott Tool & Die (in Detroit), which makes stamping dies and checking and stamping fixtures. Etobicoke, west of Toronto, was built in 1942 and purchased by Chrysler in 1964, and expanded in 1965 and 1998.

Mt. Elliott is on the border of the scenic Outer Drive and Mt. Elliott Street; Chrysler has used both names, sometimes calling the facility Outer Drive. The building itself was put up in 1938 by Briggs Body as a stamping plant; it was purchased by Chrysler, with most of Briggs’ assets, in 1956 and used until 1983. At that time, the stamping presses were removed and tool and die manufacturing equipment was brought in from Vernor Tool & Die, which was being closed down. The Mt. Elliott facility also had did pilot plant operations and stamping plant engineering into the 1990s, but these facilities were moved into the Chrysler Technology Center. The plant was idled in 2018 and remains so in May 2022; we don’t have any information on future plans.

More in the memory cards series

101 stories. Mopar is a trademark of Stellantis. We are not associated with FCA US or Stellantis, the owner of Mopar.