Chrysler started buying into the United Kingdom’s Rootes Group in the 1960s, which was likely not the best decision they could have made. Rootes had been clumsily assembled from successful English automakers, but once Lord Rootes acquired them, he didn’t seem what to do next. Quality declined over time (or was never too high to begin with), and the one car exported to the United States and sold as the Plymouth Cricket was a disaster. Chrysler did much better with its French acquisition, SIMCA, which provided the Horizon and indirectly the K-cars, and its Mitsubishi partnership, which provided the Colt.

The Chrysler Sunbeam really began with the Hillman Avenger, which was also the basis for the Plymouth Cricket. It was the last car created by the Rootes Group before Chrysler really took over, and was released in 1970. The Avenger was a good design, overall; it was produced year after year in Iran, under a different name, and had respectable performance and comfort for the class. The rear wheel drive design was still modern in 1970, with the front drive revolution still in the future.

Creation of the Chrysler Sunbeam was remarkably fast; from green light to production took just two years, and the Sunbeam appeared on dealer lots late in 1977. The timing could have been better, because the influential Horizon, whose parent car was copied by Volkswagen to create the Golf (Rabbit), arrived just two months later, The Horizon, to be fair, was a four-door, while the Sunbeam was a two-door.

The name itself was a bit confusing, since there had been an actual Sunbeam brand of cars made by the same company. The Sunbeam Tiger remains mildly famous as one of Maxwell Smart’s cars.

The Sunbeam essentially replaced the Avenger two-door sedans, with more modern styling from the Coventry design studios; it featured recessed headlights (which likely had no aero impact) and Alpine-like tail-lights. The hatchback was unusual and not especially well designed, with a high sill and essentially only the glass moveable. Front disc brakes, brake force proportion valves, and electronic ignition were standard. (A strike early in production resulted in early models being fitted with standard ignitions, which were replaced under a recall when electronic ignition became available.) 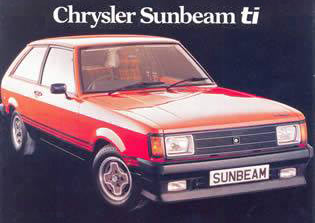 Today, when hatchbacks are seen as economy cars, the Sunbeam’s high trim levels might be surprising; at the time, they were a new and clever design. Ads featured Petula Clark, using the tagline “put a Sunbeam in your life.” The competition included the front-drive Ford Fiesta and Mitsubishi Colt, as well as the rear-drive Opel Kadett/Vauxhall Chevette, Mazda 323, and Toyota Starlet (a hatchback Corolla).

Buyers had a choice of 1.3 and 1.6 liter four-cylinder engines, taken from the Hillman Avenger; the 1.6 liter generated 81 horsepower, making the car fast by contemporary standards. These were iron-block, five-main-bearing, overhead valve designs with pushrods, not especially sophisticated. There was also an economy 45-horsepower 928cc (0.9 liter) engine borrowed from the Hillman Imp; though quite small, it was an aluminum-block design with overhead cams, so it punched above its weight. This version competed against the popular Austin Mini and the 957cc Ford Fiesta.

Unlike its American counterparts, the Sunbeam had a thermostatically controlled electric fan; the four-speed manual transmission was synchronized in all forward gears, and controlled by a floor stick. The car was unsurprisingly a unibody design; it had independent coil springs and struts up front, with a roll bar, and a four-link suspension in back. Rack and pinion steering was standard, with a 31 foot turning circle. 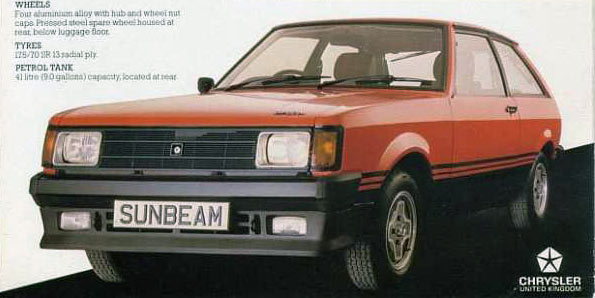 The transmissions were both four-speeds, with a Borg Warner type 45 automatic transmission optional on the 1.3 and 1.6 liter versions. This was years before Chrysler had its first four-speed automatic in the United States (which came either when they bought AMC in 1987—AMC also used Borg Warner four-speeds—or when they came out with their own in 1989, depending on how you wish to count). The Borg Warner four-speeds quickly replaced Borg Warner three-speeds (Type 35) on Chrysler UK’s rear wheel drive cars—the exception to all this being the larger cars, the 160, 180, and 2 Litre, which ironically used American TorqueFlites.

The Sunbeam Ti was essentially a European Road Runner; they took the standard bottom-of-the-line Sunbeam model, added alloy wheels, spoilers, and the 1.6 liter engine fitted as it was in the Avenger Tiger—with twin two-barrel Weber carburetors and special manifolds. The result was a harsh, thirsty car with 100 horsepower, running 0-60 mph in nine seconds, and topping out at 106 mph. These were actually fairly impressive specifications at the time, and the Sunbeam Ti could have outrun numerous American V8 cars. 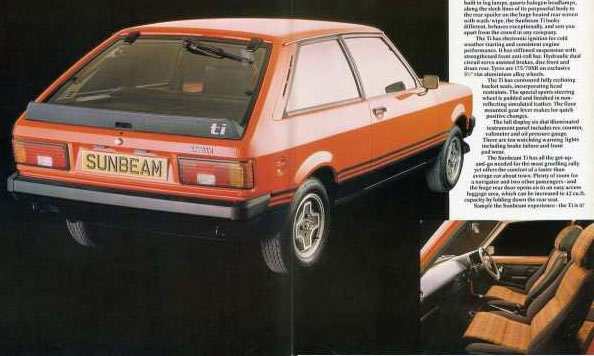 That was not the top Sunbeam, though. Des O’Dell, head of Chrysler UK racing, wanted to replace the company’s current rally car, the Avenger Tiger and Avenger BRM, to top both Ford (the current champ) and GM (the leading challenger). He settled on the Chrysler Sunbeam as the right car, given its rear wheel drive powertrain, small size, and sportier shape. Lotus had a 2.0 liter “slant four”  engine in their Elite, Eclat, and Esprit cars; O’Dell successfully acquired the engines from Lotus, but they were not reliable enough until Lotus tried installing a 2.2 liter version of the same engine, with output of up to 240 horsepower—clearly out of the 1.6 liter’s league—in the Sunbeam. The rally car started winning minor races in England, and then Peugeot purchased Rootes and SIMCA from Chrysler Corporation. They renamed the Chrysler UK cars “Talbot,”  for reasons that have never been clear. Thus, Henri Toivenen won the 1980 World Rally Championship in a Talbot Sunbeam. Talbot later hired Saab’s Stig Blomquist to be their main driver, but success eluded them; the all-wheel-drive Audi Quattro was too much competition for the aged design of the rear wheel drive Sunbeam.

A street-legal Sunbeam Lotus had gone on sale in April 1979; it had a street-tuned 2.2 liter Lotus engine pushing out a respectable 160 hp (around ten horsepower more than Chrysler’s 5.2 liter V8), with alloy wheels, a five-speed ZF manual transmission, black paint, and silver stripes. Later versions could be done in silver or metallic blue (with black stripes).

A fairly quick end of the Sunbeam was inevitable by this point; the cars rusted fair easily, newer cars were far more sophisticated with front wheel drive, electronic fuel injection, and better hatchback designs, and Peugeot was not especially interested in the Talbot range. The only major update was flush headlights and new bumpers for 1981. When the end was called in 1982, with around 200,000 cars made over four years, including 2,308 Sunbeam Lotus cars, the faraway Linwood (Scotland) plant was closed as well. 150 Sunbeams were kept for 1983; these were customized by another company (Avon). Ironically, the Avenger itself would continue on for years in Iran, albeit under a different name.