MoTales stories of Chrysler history, processes, and such

Computerized cars: Lean Burn and beyond
Much-maligned technologies they still use

Digital factories
Saving money and time by making it online

Computerized Chrysler, 1980: Systems Beyond CADCAM
How they managed production and such with computers

USA vs Japan: plant changes for a new Chrysler (1989-94)
How Chrysler rescued itself

Unibody: Behind the Sudden 1960 Move
A stunning, massive shift—the surprising reason they did it

1990s Chrysler: Company on a Mission
One of the few good uses of mission statements!

Behind the (failed) 1972 effort to fix Chrysler’s product strategy
What might have been?

Invention Factory: Liberty Group
Center for innovation or waste of time? You decide

Do you know these people from the Class of 1951?
Seriously, tell us!

Quick stories from Chrysler’s past
Volume 1: from a dyno tech, cost estimator, marketer, and product manager

Products (other than cars)

Mopars running on water: Chrysler Marine
The best, most innovative boats you could buy

Mopar clubs: the nationals
Our listing of national clubs with Web sites

Chrysler Corporation USA Sales in 1991
versus GM, Ford, and Others

Chrysler press releases over the years
With many examples 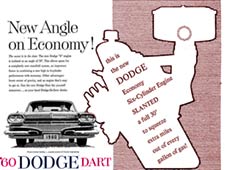