The Chrysler 300 “letter cars” (C300, 300B, 300C, etc.) were always rare, because they combined extremely high performance with luxury trim and a large size, which yielded a very high sticker price. At the time, performance luxury was not an especially large market, and the Imperial provided all the luxury one could want, with just a little less (or about the same) performance. So did more prestigious cars from Cadillac and Lincoln, for that matter.

The 300 itself was a midrange car for Chrysler; the Newport was at the low end, and the New Yorker was at the high end. The new 1970 Chryslers were internally dubbed the “F” series (of the C-bodies).

The 300 and 300 Hurst (or 300H) were both two-door hardtops. The Hurst came in white and gold, and only white and gold; the hood, with its built in air scoop, was made from fiberglass, likely to save both weight and stamping costs. The rear deck lid/spoiler was also fiberglass. The paint scheme, spoiler, almost-hidden dual exhaust, and hood scoop were all that gave away the game; the sporty grille was shared with other 1970 Chryslers, other than a 300 emblem in the center of the grille. The tail-lamps ran all the way across an indented section of the bumper. 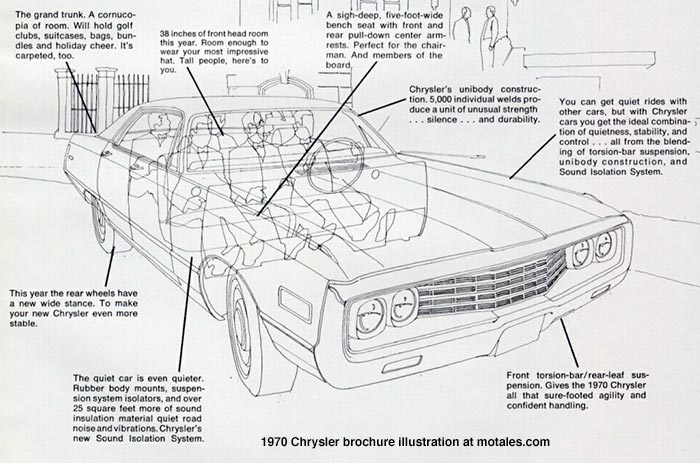 The 300 Hurst had just one engine, the 440 TNT, topped with a Carter AFB four-barrel carburetor. With 9.7:1 compression, the engines were rated at 375 (gross) horsepower and 480 pound-feet of torque, propelling the massive (4,440 pounds) car quite quickly, for the time.

Performance features outside the engine bay included heavy duty leaf springs and shocks (with the usual torsion bars up front), power front disc brakes (with rear drums), and H70x15 Goodyear Polyglas tires. The discs used 11.75 inch rotors; the rear drums had an 11-inch diameter. Car Life found 80-to-0 stopping in 320 feet; after the brakes were warmed up, stopping took 389 feet. Overall brake performance was dubbed just “fair,” partly because of rear brake lockup. The magazine found almost no speedometer error, which was fairly unusual, and a top speed of 127 mph.

Inside, buyers had tan leather seats from the Imperial, with a full center armrest and power controls; no manual transmission invalidated the luxury, when a specially tuned TorqueFlite three-speed automatic would do the trick. Sharing with the Imperial made sense, with only 485 300-H cars made, and just 11,816 Imperials—and that was a fine year for Imperial sales, which were never especially high. (This was, by the way, the end of the line for Imperial as a separate brand; it became a Chrysler for 1972, and was dropped entirely after the 1975 model year.)

At the time, some criticized the car as not being a true 300 “letter car.” True, it did not have the very best engine Chrysler could offer (the 426 Hemi), which would not have been practical for many owners; but it did have the special suspension that made the 300 letter cars more than dragstrip specials, and it was still unique among high-end cars. The 440 TNT engine was a step above the other Chryslers’ 350-horse 440 V8s, though it was shared with Dodge and Chrysler (the Imperial had a differently tuned version of that engine, pushing out 350 horsepower. That was less than the Cadillac DeVille’s 375 hp from 472 cid, Lincoln sedan’s 365 hp from 460 cid, or Olds 98 Luxury’s 365 hp from 455 cid).

The 300-H matched the Caddy and beat the Lincoln and Olds; and it could easily outhandle any car in its class. 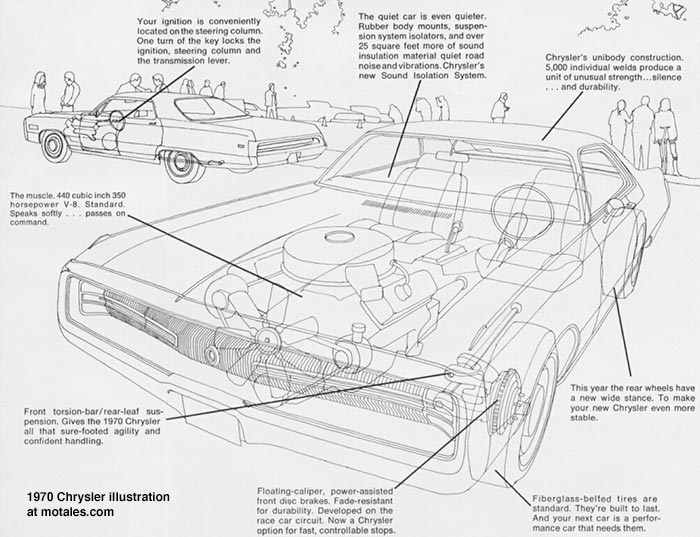 The triple-carburetor setup only added 15 horsepower, and was, like the Hemi, likely considered to be too much fuss for an Imperial or Chrysler owner.

As with all 1970 Chryslers, the 300H had a quieter ride than the prior year’s 300; the company had added rubber insulators at several points to cut vibration and noise. The interiors were also “upgraded,” according to the company, and the rear track was widened for greater stability. The 440 TNT engine had a 268-284-46 degree cam and a dual snorkel air cleaner. For 1970, the Clean Air System included retarded spark at idle, a leaner fuel/air mixture at idle, a heated carburetor air inlet, and modified combustion chamber. The thee-speed automatic transmission was standard.