Battle of the 1974 Straight Sixes

In 1971, carmakers started reporting net horsepower instead of what has been called, alternately, “brake horsepower,” “gross horsepower,” and my personal favorite, “marketing horsepower.”  The problem with gross horsepower ratings was not so much the lack of realism, but the tendency of automakers to “fudge the numbers.” This still happened into the 1990s, but the deviations from reality seemed to be smaller as time went on. 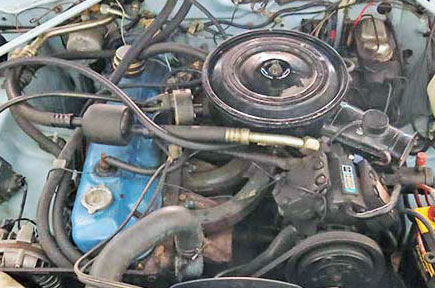 Starting with 1972, gross horsepower disappeared entirely from the American auto scene, and all readings were net. The difference in methods was whether the engine was measured with all accessories—alternator, water pump, and so on—or on its own. Since nobody could run a car without a water pump, oil pump, and such, the net ratings were far more accurate.

Now, why would we compare straight sixes? Despite long being relegated to “economy engine” status by most Americans, they were still incredibly popular, especially once fuel prices started rising and gas lines started forming. The best selling cars still tended to be inexpensive, such as the Valiant and Duster, and the vast majority of these had six-cylinder engines. In imported cars, a six-cylinder was more of a luxury or performance item, and four-cylinders were far more common.

1974 was the last year for the 198 cubic inch slant six, but it was still available on some cars, so it’s still in these charts.

American Motors was created by combining Hudson and Nash; Hudson was well known for its powerful six-cylinder Hudson Hornet, but was otherwise a fairly upscale automaker. Nash was known for its economy cars, such as the Rambler. AMC would be expected to put more effort into smaller engines.

To make these charts easier for cellphone users, we are abbreviation compression ratio to “C/R” and horsepower to “HP.”

AMC’s engines, despite lower compression, outpowered the Chrysler ones, and also had higher torque—but then, they were both bigger. The big Mopar slant six was the 225; the small AMC straight-six was the 232. Comparing those engines shows similar power ratings, well within the margin of error. The AMC engines would famously be turned into the famed 4.0 liter Jeep engine, known for its power, efficiency, and reliability—but that was some years in the future. (The 4.0 is called that, rather than by its (242) cubic inch displacement, because that was the way AMC invariably referred to it.)

Mopar vs GM and Ford

GMs 250 cubic inch engine may have been bigger than the Mopar 225, but didn’t generate quite as much power. (This engine had different compression ratios reported for Chevrolet, Buick, Pontiac, and Oldsmobile, but output ratings were identical.) This first chart shows the three larger engines. The two Ford engines (one in each of the following charts) were also used in the Mercury Comet. Checker also used the GM 250, with 8.3:1 compression (which probably was the case for all the GM 250s) and the same power ratings (except torque was listed as peaking at 1800, rather than 1600, rpm).

What about gas mileage, you may ask? City gas mileage is largely influenced by weight; highway mileage, by aerodynamics and gearing. The car makes a big difference regardless of the engine—which is why a Valiant 225 was rated at 18 mpg city, and a Fury 225 was rated at 14 mpg city (in 1975). The EPA listings in 1974, their first year for publishing test results, sometimes had multiple listings for the same car, with the same engine and transmission and axle ratio, making the results hard to interpret. The 1974 “Plymouth Compact” (Valiant/Duster) 225 automatic, with 2.76 gearing, was shown at 16.7 and 15.7 mpg. The Nova 250 automatic was listed at 15.2 and 15.7 mpg with 3.08 gearing. The Mercury Comet/Ford Maverick were both smaller and lighter than the Plymouth; the Maverick 250 automatic was listed at 15.6, 14.5, and 13.1 mpg

This second chart shows the smaller Ford and Mopar engines:

BMW’s six was the biggest engine they sold in the US; it was still an inline engine but revved higher and made far more power than the American engines, which were made for economy.

We are skipping the smaller Triumph 122 inline six in the charts, along with the 152 cid TVR engine. Note that in all these imported cars, since the six-cylinder was high performance, horsepower peaks at a much higher rpm than in the American cars.

The lightweight Datsun 260Z, incidentally, managed to do 0-60 mph in around 8.3 seconds, matching many Detroit V8 muscle cars. Datsun’s performance from the little 156 cubic inch (2.6 liter) six-cylinder is really quite good; so is BMW’s 182 cubic inch straight six, shown below. These were really quite small six-cylinder engines, other than Jaguar’s “American-sized” 258.

These charts do not compare the slant six as truck engines; Dodge used the 225 in its pickups, while GM and Ford both had larger straight sixes, displacing 292 cid (Chevrolet) and 300 cid (Ford). Jeep used AMC’s 232 and 258 engines.

Overall, the Mopar slant six, despite its rapid development, managed to meet or beat pretty much all its Detroit competitors, cubic inch for cubic inch; but given that six cylinders were a luxury-performance option for the rest of the world, imports all had much higher horsepower ratings, except the little Triumph—though only the BMW had more torque.

The slant six did well for 1974, overall—which was good, given that they were made by the hundred-thousand.