Quick: What started out as a GM-Fiat small car platform, was widened and lengthened and given all wheel drive and some offroad capability, renamed as the Jeep Renegade and Compass with different powertrains, then modified again into the Alfa Romeo Tonale (again with a new powertrain), and finally released as a Dodge with two new powertrains?

If you guessed the Dodge Hornet, you may just have read the headline, but there’s a lot more to this car. It’s the first ever hybrid performance car from Dodge, and there are two versions—the cheaper one having a larger gasoline engine, the pricier one having higher performance and a hybrid setup with a little engine. Both are, unsurprisingly, made in Italy (Naples).

At launch, the 2023 Dodge Hornet was the fastest, quickest, most powerful compact utility vehicle under $40,000. It was revealed on August 17, 2022 and will be officially launched in March—though some may leave dealerships before that. 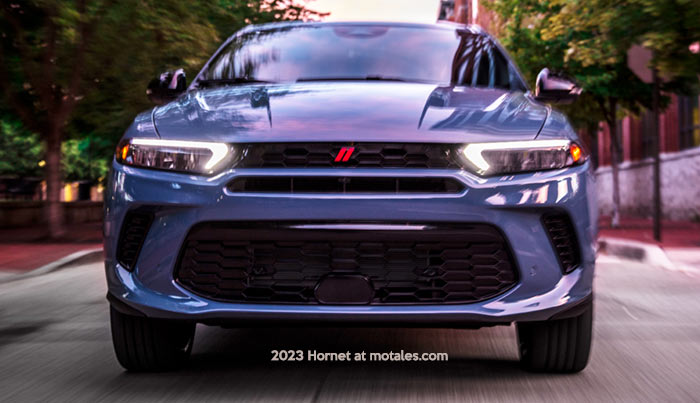 Note: Photos are generally the GT model, which is coming out first. Interior photos appear to show the Plus or Track Pack.

The Dodge Hornet R/T has the little 1.3 “GSE” four-cylinder, which has been fairly undistinguished. However, it will now be paired with an electric motor hooked up to the rear axle, with a 15.5 kWh battery; this results in a 7.1 second 0-60 time, normally, which is decent for the segment but not outstanding.

A new PowerShot feature, which sends an extra 25 horsepower into the system for a brief time, drops the 0-60 run down to 6.1 seconds. PowerShot provides bursts of extra electric power, up to 15 seconds worth, which can be repeated after 15 seconds of cool-down; that’s more than enough to get onto the freeway and up to clearly illegal speeds. It activates by pulling both of the paddle shifters and kicking the gas pedal down. The system makes sure battery charge and temperature are acceptable first, then lights the PowerShot symbol in the gauge cluster.

There will be three driving modes: hybrid, full electric (for around 30 miles of range), and E-Save, which preserves the battery charge as much as it can (E-Save actually has two modes, Passive to maintain the existing charge and Active to recharge the battery). The only transmission is a six-speed automatic. The car is a PHEV since it can be plugged in to charge the battery and then run on full electric for roughly the length of a normal commute; some buyers may only need to buy gasoline every couple of months (though leaving old gasoline in the tank for that long is a bad idea without fuel stabilizer). 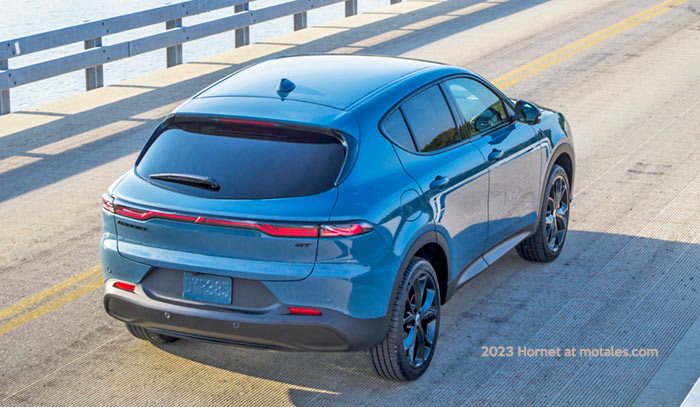 The electric motor is good for 90 kW, with 1844 lb-ft of torque—yes, 1,844 lb-ft—at 0 rpm, making for generous launches. The battery uses refrigerant to stay cool. A starter/generator helps to recharge the battery (with up to 44 hp) when coasting, which also has brake-powered regeneration. The 7.4 kW provides for full battery charges in around 2.5 hours with a level 2 charger; the motor runs at up to 306V, and the battery uses 84 cells in series, weighing 276 lb. 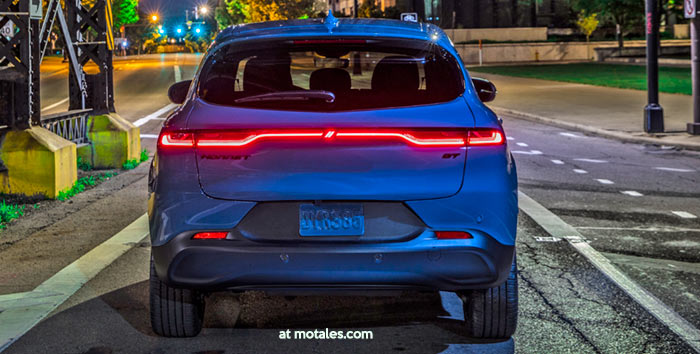 The sport mode has a physical button; it provides a “sharper throttle,” different shifting, “optimized power and torque” from the hybrid system, and a tighter steering wheel feel. As with pretty much all current cars, power steering is electrical rather than hydraulic. All wheel drive is standard, using the electric motor for the rear wheels.

The Hornet GT has the well-tested and well-regarded 2-liter “GME” four cylinder, which runs to 265 hp and 296 lb-ft of torque. The wastegate is electrically activated, and a water-to-air intercooler is mounted directly to the head. High pressure direct injection is included along with dual overhead cams, each individually timed, and cooled EGR. 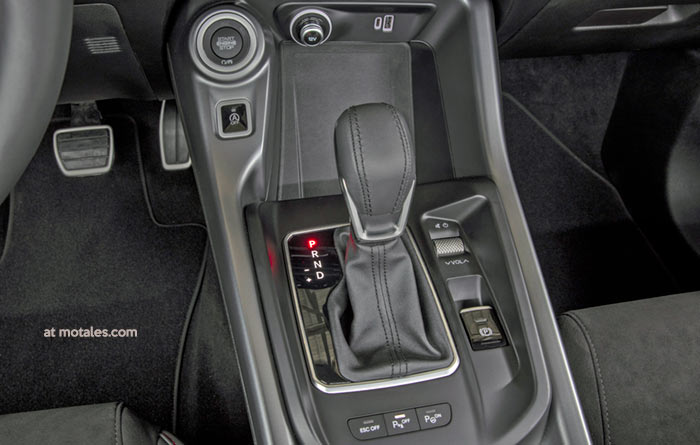 The 2-liter comes with a nine-speed atuomatic; it too has Sport Mode, which provides “access to full power and torque and a tighter steering wheel feel” as well as throttle and shift schedule adjustments. In Sport Mode, the Hornet GT can run from 0-60 in 6.5 seconds, just behind the Mazda3 Turbo’s 6.3 seconds. All wheel drive is standard, and fuel economy is rated at 21 city, 29 highway; the Mazda 3 turbo, with all wheel drive, is rated at 23 city, 31 highway, exactly 2 mpg above the Hornet (both have automatics). The Hornet is likely to be larger than the Mazda.

Ordering for the GT is already open, with deliveries slated for late 2022; the R/T comes later, in spring 2023. 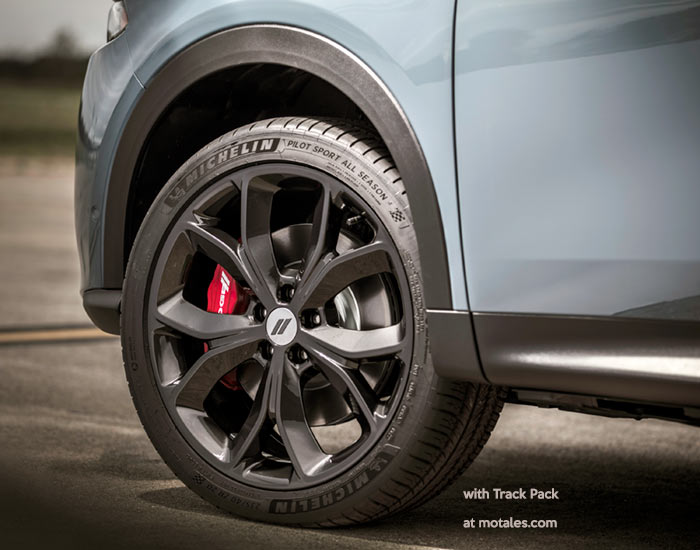 Performance isn’t just straight-line acceleration in the 2023 Dodge Hornet, which is lucky, because its numbers are good but not incredible. Buyers also get: 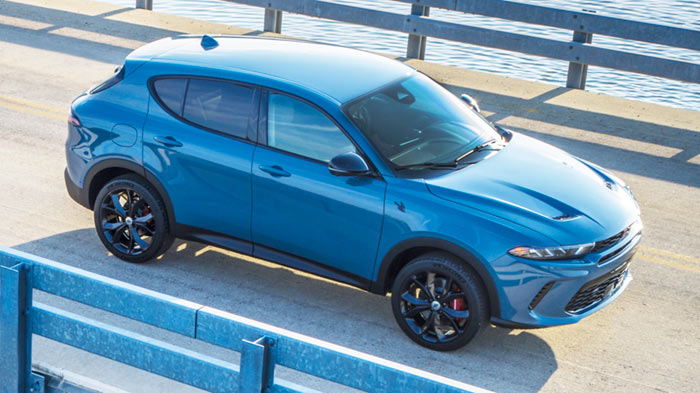 2023 Dodge Hornet telematics and such

Styling, design, and such

The full-width tail-lamp includes a new, illuminated “Dodge Rhombi” logo in the center (the Rhombi is just the two slashes which have been Dodge’s logo for some time, not to be confused with the Fratzog, which is reserved for BEVs). A Blacktop package, also called “murder Hornet” in the press release, has 18-inch black alloy wheels with gloss black badges, mirror caps, and daylight opening moldings. The Track Pack has 20-inch black wheels. Colors are: 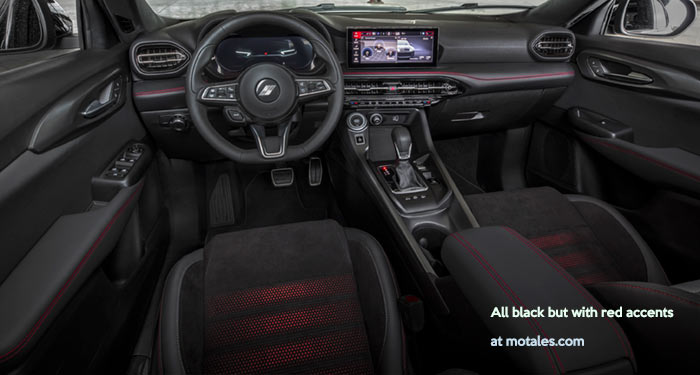 The driver-focused design tips the stack controls and display screens toward the driver. The instrument panel has a wrapped and stitched mid-bolster that extends through the instrument panel. Red stitching accents flow throughout the black interior. Performance controls are at the fingertips; the sport/hybrid mode button is on the flat-bottom steering wheel. The Track Pack has class-exclusive perforated Alcantara seats with subtle red accents (see above) and an embroidered Dodge Rhombi logo. The Plus versions come with leather seats; red leather is optional.

The profile view is almost identical to that of the Tonale; the interiors are very close, too. The front look is very different but the rear look is extremely similar to the Tonale, possibly to save money in crash testing. Both use similar full-width graphics. “pumadog” at Allpar noted that “the Hornet even uses the same two layer seats as the Tonale;” controls are very similar in appearance and layout.

Generations: Compass to Tonale to Hornet

Compared to Compass and Tonale show the family resemblance. The Compass is a bit shorter, possibly because overhangs are critical to offroad use.

* Originally provided in millimeters. It’s possibly the Dodge Hornet is the same length, but rounded to the nearest inch.

The GLH name was just trademarked, and now we know why: it’s a concept car with Mopar Performance upgrades. More on this to come...