The first computerized cars: Chrysler Lean Burn and beyond

The company in charge of moon-rocket remote diagnostics, Chrysler Corporation, was in a quandary as the moon rocket program wound down and electronics experts suddenly had no clients. The result was a sudden leap in car technology, including the first standard electronic ignition, sophisticated testing of racing cars, and the first on-board computers for cars. 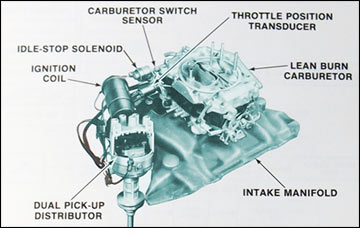 At first, the onboard computer, launched on some 1976 cars, only controlled spark advance in a more intelligent fashion than the simple vacuum and mechanical systems of the day. They had numerous problems, some of which were related to mechanics being unwilling or unable to diagnose issues that came up; what’s more, the system was not quite up to the hazards of living under the hood, especially in the years it was attaching to the ever-shaking air cleaner.

Regardless, the system was the first major step forward in spark advance since the early mass-production years (1920s-30s), when automatic (mechanical or vacuum based) spark advance first became standard.

Lean Burn was used in premium V8s in some 1976 cars. For the 1977 cars, a simplified version brought in the electronic ignition system (which was still fairly new, but already standard across the Chrysler line—and entirely absent from some competitors), and did away with the centrifugal advance flyweights in the distributor, along with one of the twin pickup coils. The 1978 Lean Burn system was used on most Chrysler V8s, using a single integrated circuit board, and integrating the work of the old flyweights.

Randy Miller, who fixed his own 400 cubic inch V8 (1977 Chrysler Newport), found bad solder joints after removing the potting silicone (which prevents the components from rattling apart). He touched up all the solder joints, replaced the capacitors with more reliable modern versions, and reapplied the silicone; now, the system works well. He wrote that the main problem was mounting the computer on the air cleaner.

Even this early version of Lean Burn was an impressive advance; it smoothed the engine, increased performance, and controlled emissions. The system was fairly sophisticated, too, measuring engine speed, engine load, throttle position, speed of throttle movement, incoming air temperature, antifreeze temperature, and time from engine starting. All these factors were put into algebraic formulae to determine the best spark advance, constantly. 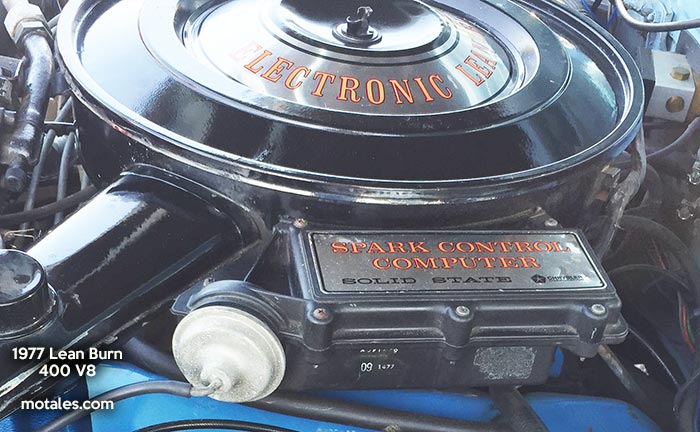 Timing was advanced (spark plugs firing earlier) at higher engine speeds, while warming up, at part throttle, when the pedal was to the metal even if engine speed and load were not measured as being high, at cooler temperatures, and on the highway. It retarded timing when the car as being driven in the city (to reduce emissions) and when air temperatures rose (to protect against detonation).

Chrysler marketers named the setup “Lean Burn” because it could be tuned to run engines at “lean”  fuel mixtures of up to 18:1 (rather than the normally optimal 14:1), saving fuel and cutting emissions. (A mixture with too much fuel for the air is “rich.”)

According to former Chrysler dyno technician Marc Rozman, Lean Burn’s inventor was Gorden Fenn, who worked on a rapid timetable, which explains some of the teething problems, to meet increasing emissions standards. The first patent was granted long after it was in production: on August 8, 1978. While Fenn did not create the unconventional 1980-81 Imperial electronic fuel injection setup, he did substantially improve it after its launch. 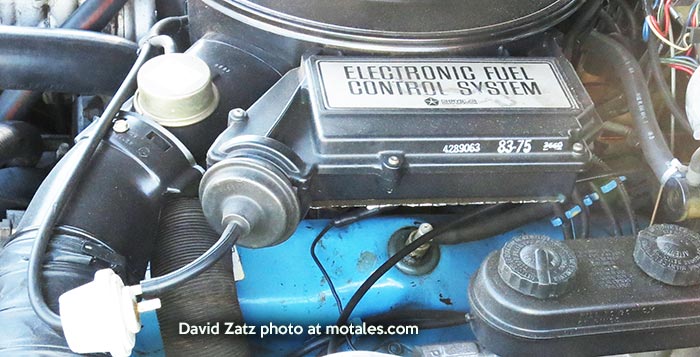 The main issue with these early computers was eliminating vacuum—also key to making pre-computer, mid-1970s cars run properly. Setting the timing properly is important; most people suggest adding two to four degrees of advance to the factory spec, pushing forward until the engine pings (or using higher octane fuel to deal with pinging). The system, not surprisingly, demands proper voltage, which means the battery and alternator have to be up to snuff. Finally, the carburetor must be perfectly adjusted, including the float level, and these were often off when installed at the factory. 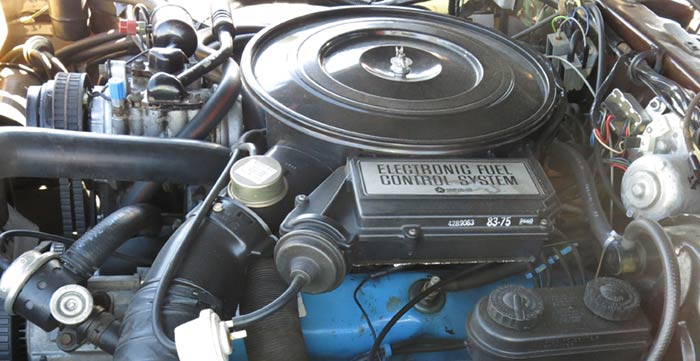 There were some definite benefits to the system, including faster starts, lower emissions, and better economy. Downsides include slower spark advance changes, which can result in apparent stumbles under some conditions.

A major move forward was adding an oxygen sensor and using the system to adjust the fuel mixture, implemented in some 1979 cars. They used a special carburetor, controlled by the computer based partly on feedback from the oxygen sensor in the exhaust. This system was very similar to fuel injection setups, except that the computer could make the mixture leaner and richer on a carburetor instead of slowing or increasing pulse rates or changing fuel pressures.

Known as the “Electronic Feedback Carburetor Control System”  (EFCCS), the system was only sold on the slant six with single-barrel carburetors and automatic transmissions, and then only in California, though it would be used elsewhere in 1980 model-year—but the standard carburetors remained in use as well.

One owner, Willis found that a bad spark plug wire caused the system to go into a fuel-guzzling, power-reduced “limp mode.” He found a Chilton guide to troubleshooting, using a standard multimeter; since the system was based on varying voltage and resistance, it proved to be easy to troubleshoot. Still, mechanic complaints and the time taken to resolve simple problems probably led the company to be among the ifrst with diagnostic ports, and easy error readouts for customers.

All these early systems used analog computers. The 1980 360 V8 gained a digital-microprocessor spark advance system which would replace the analog setup, and California V8 cars got a detonation suppressor system. The system used sensors on the intake manifold which could detect high levels of vibration, and adjust the timing accordingly. In the same year, various small-block V8s gained a dual-pickup distributor. This affected the California and high altitude 318, and the federal 360 four-barrel.

The natural conclusion of the electronic feedback carburetor was an electronic fuel injection system, and Chrysler’s very own, hastily developed—some say outdoors, under a canopy—appeared in the 1981 Imperial. This setup had fully electronic controls, and was entirely built and engineered by Chrysler. Some say it was not technically fuel injection but a different type of carburetor; in any case, rather than using now-conventional pulsing, it emitted a steady stream of fuel, controlled by changing the speed of the fuel pump. It was a milestone but it was also too hastily developed, and had numerous problems. Customers of the prestigious Imperials were given refunds and/or carburetors.

The 1981 model year was also the debut of the new Reliant and Aries, which were highly successful—and came with a brand new 2.2 liter engine, the company’s new mainstay for over a decade. This engine started out with an electronic feedback carburetor and the engine control system. One year later, the system gained adaptive memory, for some of the 1982 four-cylinder cars.

All Chrysler cars, other than some 225 slant sixes, now had a feedback carburetor system with a catalytic converter, similar to the 1979 California setup. The only cars with traditional carburetors were now 49-state models with the 225 and “high aspect ratio” catalytic converters.

At this point, we do need to point out that when we say “cars,”  so far, we only mean sedans, coupes, and wagons—not pickups or vans (minivans have yet to show up, and Chrysler SUVs are still technically trucks). Because at the time trucks were (including vans) were almost entirely used for commercial purposes, not commuting, they had lower pollution targets and didn’t need the computerized engines. For 1981, electronic spark control became standard on all strucks using the single-barrel 225, four years after its first use in cars.

Canadian cars were much like trucks, in that the Canadian government was quite slow to adopt modern emissions standards, so the pricier features were not used for a good time longer. Most four-cylinder Chrysler cars left the catalytic converter out; Peugeot-engined cars had the cat in, but had less up to date emissions controls otherwise. Still, electronic feedback carburetors were used on the 2.2 liter engines.

Modern fuel injection finally arrived on the 1984 cars, with the turbocharged four-cylinder engines; spark control and injector pulsing were, needless to say, computer controlled. Other engines, though, kept their carburetors and their spark control and carburetors—including the Mitsubishi 2.6 four-cylinder. Some 2.2 cars had fuel injection (the Dodge Daytona and Chrysler Laser); it was phased in on the other 2.2 cars over several years. Any cars with fuel injection had an onboard diagnostic system to tell techs or owners where the problems were; these early systems required proprietary connectors, but a “key dance”  would provide owners with two-digit codes blinked out on their “check engine” lights.

Some 1985 V8-powered cars used a Rochester (GM) Quadrajet carburetor with the feedback system; their E4M model started with an E to signify the electronic control. An oxygen solenoid was mounted in the float bowl of these; they used stepped metering rods in the primary jets. The four-cylinder engines all had carburetor modifications in the same year. For 1985, finally, nearly all engines gained onboard diagnostics—even those with electronic feedback carburetors. At the same time, the number of possible fault codes on the EFI systems was expanded. The only cars without onboard diagnostics (OBD) were the rear wheel drive vehicles. The move to onboard diagnostics also meant that the module connector on carburetor cars went from 12 to 14 wires. (Also in 1985, the Holley 6280 replaced Carter two-barrel carburetors.)

Chrysler had been the first company with standard electronic ignition—their own design; they had been the first to design portions of their vehicles on computers; and they had been the first to move to computers. While their early designs were prone to failure, the company kept working on fixing the problems, and seamlessly (if slowly) moved over to electronic fuel injection. Lean Burn is still not a beloved name, but it ushered in a new era of efficiency, and ended up being very reliable and dependable—long after the “Lean Burn” name itself was dropped.