by David Zatz drawing on work by Michael Volksmann at Allpar

Part of Fiat and Chrysler merging was putting together two very different powertrain departments to make new four-cylinder engines for all the mainstream brands. DaimlerChrysler’s 2.4 liter engine was not garnering much acclaim, and the small Fiat engines were falling behind. Could engineers from Michigan, Brazil, and Italy come together to combine the best of their approaches into state-of-the-art packages? 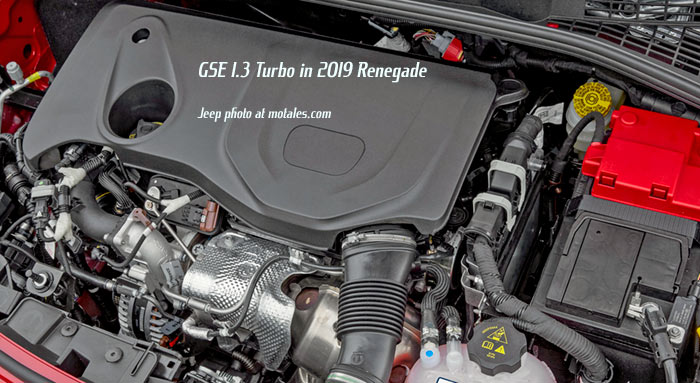 Their efforts were to be funneled into two series of engines: a Global Small Engine and a Global Medium-sized Engine, with the GSE and GME acronyms. GME yielded a single 2.0 liter engine, which is used both on its own and as part of the “4xe” hybrid setup; GSE has so far yielded three engines, with 1.0, 1.3 (1,332 cc), and 1.5 liters of displacement; they are sold as the FireFly in Brazil, and have no marketing name elsewhere. The 1.0 is only used by Fiat, and the 1.5 is used by Alfa Romeo and reputed to be going into the Dodge Hornet.

The American version of the GSE 1.3T, now only used by Jeep and Fiat but likely to replace the 2.4 engine in the ProMaster, generates 177 horsepower at 5,500 rpm and 210 lb-ft of torque at an impressively low 2,200 rpm. Despite this, it provides better fuel economy than the old Fiat 1.4 liter turbo—and of course better economy than the 2.4. In the Jeep Renegade, for example:

The 1.3 engines in the U.S. and Canada have low-inertia turbochargers with electronically activated wastegates. Other GSE engines used by Fiat are shown below, with their immediate predecessors:

The GSE replaces all prior Fiat and Chrysler engines from 1.0 to 2.4 liters with a common, more efficient design. The horsepower rating of the 1.3T is between the 1.4T and the 2.4, but it has better torque than either one—and that torque is on tap along a much wider range, making the engine more “driveable” and responsive than the peak numbers alone would suggest. It’s also lighter than the 2.4, at 100 kg. The downside is requiring 91 octane premium fuel—the same requirement as the Fiat 1.4T.

There are two valve control systems—cam phasing and MultiAir II. Cam phasing has been used on Chrysler engines including the Hemi V8 for quite some time. MultiAir III is a new version of the Fiat valve control system which uses oil pressure (manipulated by computer-controlled solenoids) to set intake and exhaust valve lift and duration, one cylinder at a time. It’s a clever but expensive system; this third generation is more precise than the one before it. The two valve control systems can open valves early for exhaust gas recirculation and close valves late (increasing compression) to gain power; they can also run the engines in either the usual Otto cycle or a modified Atkinson cycle. The latter, used only under low load, can save fuel. Delaying valve opening cuts pumping losses and can cut fuel use by 7%.

The only real downsides of the MultiAir system are its cost and the low redline, of 6500 rpm in the Jeep Renegade 1.3T.

The combustion chamber, valves, and plug positions are remarkably similar to that of Chrysler’s second-generation 4.7 liter High Output V8 (which used Hemi design features). Other block features come from the “E.torQ,” which was based on the Neon 2.0, including the internally balanced crank rotating assembly. The integrated exhaust manifold, an evolution of the Pentastar Six, saves money and speeding warmup. The open deck block uses an offset crank, similar to those of the Tigershark WGE engines, to reduce piston-to-cylinder-wall loading.

Two parasitic loss reduction features, pioneered on Ram trucks, are the variable-displacement oil pump and, with stop-start systems, the “smart” alternator which charges while the vehicle is coasting or slowing down, but not when more power is needed.

Direct injection creates harmful particulates, requiring a filter behind the catalyst so the engine can conform to Euro 6D rules.

As for overall performance: Car & Driver found that it was slightly slower in 0-60 runs (9.0 seconds; 17.1 second quarter-mile) than either the 1.4T or 2.4 Renegades. They wrote that while it felt a little more energetic, it still had turbo lag; and they criticized the low redline. Gas mileage in their tests was not as good as EPA ratings would suggest.

GSE development centered in Brazil, with a global team led by ex-Chrysler Powertrain Coordinator Bob Lee and ex-Fiat Powertrain Engineering Director for Latin America Aldo Marangoni. Bob Lee joined Chrysler in 1978, and led the New Hemi and Pentastar V6 programs before being put in charge of engines and electric propulsion in 2011. Aldo Marangoni worked on the MultiAir system, FIRE engines, diesels, and the highly regarded TwinAir.

The GSE's modular architecture is based on a third-of-a-liter (333 cc) cylinder unit, with plug-in and mild hybrid featuers plumbed in for future use. The block was developed and built with Fiat’s Teksid division, and is produced in Poland, at the same 2003-vintage plant that makes the FCA's 1.3L MultiJet diesel and the 0.9L TwinAir gasoline engines.

Changing the oil in the Renegade/500X 1.3T requires and 13 mm sockets, three and six inch extensions, and an adjustable oil filter wrench. The engine takes four and a half quarts of synthetic 0W30, conforming to Mopar MS13340 (check your owner’s manual to confirm that this is the right oil for your region and model year).