The Dodge Charger BEV shown as outlines in blue, with blue smoke and a bright red fratzog, has finally been revealed—and it may look more like a classic 1968 Charger than any other car to wear the name—right down to having just two doors, which seems to rule out a Challenger version. It is, however, only a concept for the moment.

The car was not developed by a different company: Dodge leader Tim Kuniskis said that they had the patents, innovations, and performance to prove it.

Many complaints about the idea of a Dodge BEV muscle car idea had to do with the noise of a V8, so this concept has a computer generated “exhaust” sound, both from idle and under full “throttle.” That system was dubbed the Fratzonic exhaust system, in a nod to the fratzog. Its top loudness is 126 decibels, the same as the Hellcat, but rather than emulating a V8 directly it sounds like a combination V8 and electric car. Patrick Rall, at Stellpower, said it was “unmistakable at idle and on a hard pull.”

The Charger Daytona has an 800-volt electric drive system acting on all four wheels through the “Dodge E-Rupt” transmission, which should allow for longer driving ranges at high speeds. The Dodge E-Rupt also has an “electro-magnetic shift experience” to mimic a conventional transmission’s shifts. The system also has Dodge’s PowerShot, which debuts in the real-production Dodge Hornet; this provides 15 seconds of extra power when the driver holds down both shifter paddles and floors the pedal (there may be a separate button on the Charger). 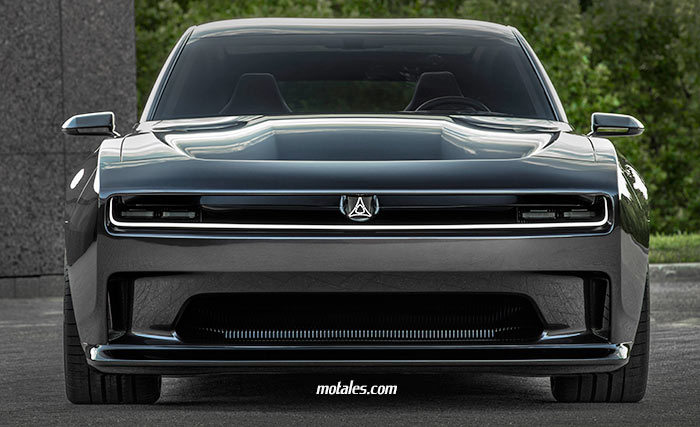 Dodge does plan a real production Charger BEV, with three trim levels, each of which will have three levels of upgrades from Direct Connection. The Banshee tops the list; it has faster acceleration than a Hellcat.

The Dodge Charger Daytona SRT concept was clearly meant to evoke the 1968 Dodge Charger, just as the successful modern Challenger is clearly based on the 1970 original. The grille even appears to be fairly vertical, as the original’s was. Part of the grille is open, creating the “R-Wing,” allowing air to flow over the hood and roof. Overall, the Charger Daytona manages to be 25% more aerodynamic than the 2022 Dodge Charger Hellcat, a stunning achievement. 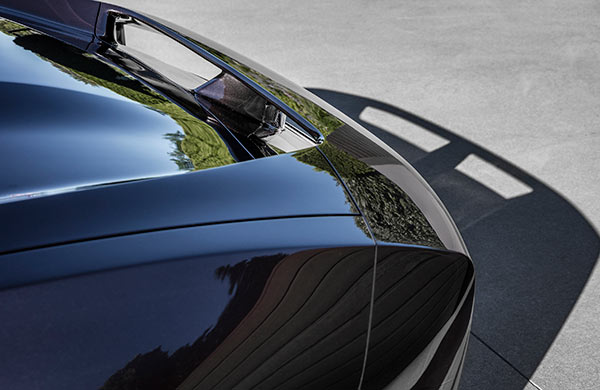 The 2022 Charger is big, but the Charger Daytona is a two-door—like the original, and the current Challenger—but has a longer wheelbase which adds rear seat legroom. In an echo of the old Shadow, the rear glass lifts up for better cargo access. 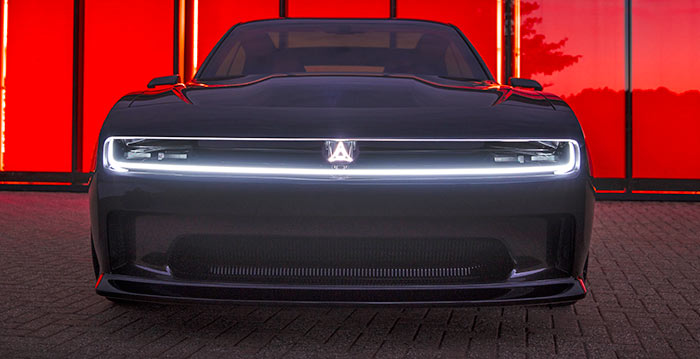 Signature lighting includes a white-illuminated grille (which nearly hides the headlights—the original had headlight doors) and a glowing fratzog badge. In back, the racetrack tail-lights return, surrounding another red glowing fratzog. The rear diffuser has a Fratzonic exhaust logo—the only wording on the concept. 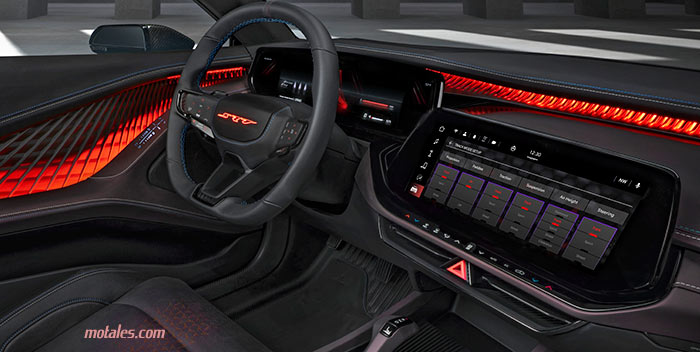 The Banshee concept has 21-inch center-lock wheels with 305mm tires up front and 325s out back, as well as the now usual Brembo brakes. Regenerative braking is part of the package, saving wear on the pads and discs.

The gauge cluster is a massive 16-inch screen, with a 12.3-inch infotainment screen in the middle (this may or may not be production intent). A single button press on the steering wheel lets the driver pick from Auto, Sport, Track and Drag modes, changing the driving dynamics, instrument cluster information, HUD content, performance sound, and interior lighting. 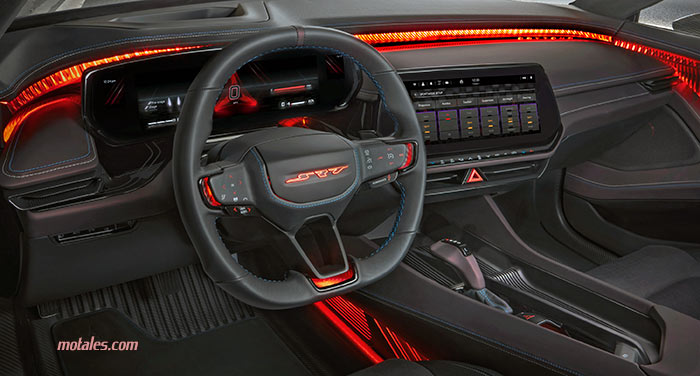 Seating includes race-style bucket seats for four people with a panoramic glass roof. The rear seats fold flat and the carbon fiber floor tub helps reduces weight. Again, it’s hard to tell what is concept and what is production intent.

Looking at the tail, there may be some ’Cuda influence, remembering that FCA also trademarked that name.

Whether people accept the idea of a Dodge battery-electric now, the fact is that the highest performance no longer rests with gasoline powered cars. Electric cars are as much a part of future high performance as fuel injection is part of today’s high performance. With the Charger, Dodge seems to be trying to ease the transition and bring as much of the good 1968 and 2022 Charger as possible into an electric future.