L.L. “Tex” Colbert: modernizing Chrysler, the 1957 debacle, and the Valiant

Lester Lum Colbert was born in June 1905 in Oakwood, Texas; his father was a cotton farmer/buyer and his mother was a schoolteacher. He got a job at a soda fountain while still in grade school, then organized his peers to help him run a laundry route. By 13 he had learned how to trade in cotton; at 16, he was making enough money in cotton trading to pay for his University of Texas education. He graduated at 19 and went on to Harvard Law School, dropping out for one year to make enough money trading cotton to pay for the rest. In his final year, he married fellow Oakwood student Daisy Gorman. 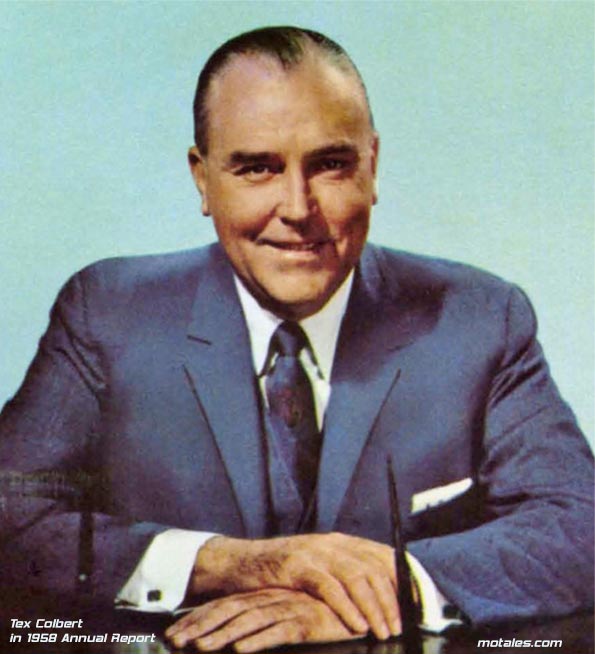 Walter Chrysler and K.T. Keller met “Tex” while he was on the Chrysler account at Kelley, Drye, Newhall, and Maginnes; they plucked him out of the legal firm to be Chrysler’s resident attorney in 1933. K.T. Keller sent Colbert to night classes to learn manufacturing, and the lawyer ended up in charge of a huge new plant in Chicago, making Wright-designed radial engines for B-29 bombers.

Walter P. Chrysler retired from the Chrysler Corporation in 1935, naming K.T. Keller as his successor. Keller performed well enough until the 1942 switch to making weaponry, and then he performed miracles—and refused any but token pay and profits. After the war, he gave up Chrysler’s second place sales to Ford, refusing to concede to new styling or driver convenience trends such as automatic transmissions or V8 engines; he even resisted single-piece curved windshields as a gimmick.

In late 1945, Colbert was put in charge of Dodge cars and trucks. In 1949, he became a vice president and director—the first corporate officer negotiate directly with the union. In 1950, at the relatively young age of 44, Tex Colbert took over the company, while Keller moved up to chairman, also taking on a government position coordinating guided missile programs—which kept Keller busy and reasonably out of Colbert’s hair. He also gained some independence while losing the “Three Musketeers” who had created the 1924 Chrysler and the innovative Airflow, and who still ran Engineering and R&D. Fred Zeder died in 1951, still in office; Carl Breer had retired in 1949, but stayed on as a consultant into 1953; and Owen Skelton retired in 1951. With Walter Chrysler, the Musketeers, and K.T. Keller all gone, Colbert was in some ways on his own, as the leader of the most research-and-engineering-focused automaker in America.

Tex Colbert started pushing Chrysler forward. He had McKinsey & Company evaluate the company’s structure and implemented their suggestions; and he helped Chrysler to buy one of its body builders, Briggs. Under Colbert, Chrysler launched its first automatic transmissions and every V8 family it would have until the 21st century. In car design, Colbert was almost the opposite of Keller, pushing for the lean, low, and long look.

By 1953, though, Chrysler was the country’s highest-cost major manufacturer. One issue was trying to match GM and Ford in every segment, but with far lower sales. Chrysler’s profit margins were small even in good times.

Tex seriously attacked cost in 1954, after discovering that Chrysler spent far more per car than GM or Ford. He built new, more efficient plants in Newark, Delaware; St. Louis, Missouri; and Kokomo, Indiana, while renovating old ones. He moved engine design and production into a central corporate area instead of having different engines, with different parts, for each brand. Then engineers also started standardizing parts in the chassis, and then the body shell. This all slashed tooling costs, parts inventories, and complexity, moving Chrysler to a closer cost footing with GM and Ford—until GM and Ford caught on and did the same. 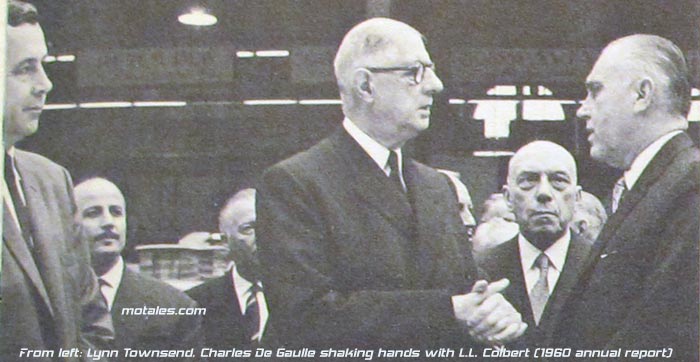 Tex Colbert also promoted Virgil Exner from leading the advance design group to actually being in charge of designing new cars; the first impact of that arrived with the critically accalimed ’55s. Oddly, there is some debate over whether the styling focus on “longer and lower” helped or hindered sales compared with the old focus on function and quality.

Virgil Exner had developed a hefty restyling of the entire lineup for the 1958 model year. For whatever reason, Chrysler rusheded them into production for the 1957 model year; that rush, and the lack of testing, brought severe quality issues which erased Chrysler’s once-stellar reputation. Sales shot up when the cars were unveiled, then plummeted when the problems became clear. The cars turned off future buyers with rattling, rust, torsion bar snapping, and parts failures. While the actual problems were fixed by the next model year, 1958 sales plummeted by 56% as the damage lingered.

These failures did lead to an engineering triumph. Because rust was a major issue, engineers were determined to root it out, but dragging their cars through rustproofing baths didn’t work—the bodies came apart as they left the baths, full of water. The engineers then converted nearly the entire lineup from body-on-frame to unibody; now the bodies were strong enough to be dragged out of their chemical baths, liquid pouring from every opening. Ironically, while the 1957 cars had few serious changes, the 1960 bodies were completely new—and the transition was almost completely seamless, thanks to care in engineering, plexiglass models, and computer design.

In mid-1957, Tex Colbert had also started a team to develop the 1960 Valiant compact car, which was essential to staying relevant outside the United States and Canada. The Valiant probably postponed Chrysler’s 1970s crisis by a decade, because compact cars were increasingly important—and because it needed a new, modern straight-six engine (the “slant six”) which would be used by all other parts of the company. The Valiant’s development team also addressed problems of torsion-bar suspensions and upgraded Chrysler’s antiquated brakes and axles.

Under Tex Colbert, Chrysler started dabbling in racing; updated its manufacturing plants; started going global; began using computers for auto design; and pushed styling, power, and modern conveniences forward. Unfortunately, the boundaries between brands became blurred, quality arguably fell, and Chrysler gave up around eight full points of market share, going from around a fifth of the market to roughly 12%, mostly due to the 1957 quality debacle.

When Tex Colbert moved on to become chair of the board in 1960, he named William C. Newberg as his replacement—then found out that Newberg owned a large number of shares of two Chrysler suppliers. Newberg claimed that he was able to get lower prices for Chrysler that way. There seems to be evidence of a great deal of corruption between Chrysler and its suppliers from that time, and not all of it was on Newberg’s part; nor is it completely clear that Newberg was doing anything unusual for the time.

A literal fist-fight led to Newberg being forced out; he then sued Chrysler for improper dismissal, demanding $5 million. While the suit was in court, columnist Drew Pearson revealed that Tex Colbert’s wife, Daisy, also owned shares in a supplier, selling her stock just before Newberg was forced out. Chrysler ended up settling with Newberg, a decade later, paying him $85,000 in 1970.

Tex Colbert, who had taken over again with Newberg’s resignation in 1960, stepped down from his positions as president and chief exeutive on July 27, 1961. The board appointed him chairman of Chrysler Canada, since he was only 56 years old and his pension wouldn’t start until he turned 65. 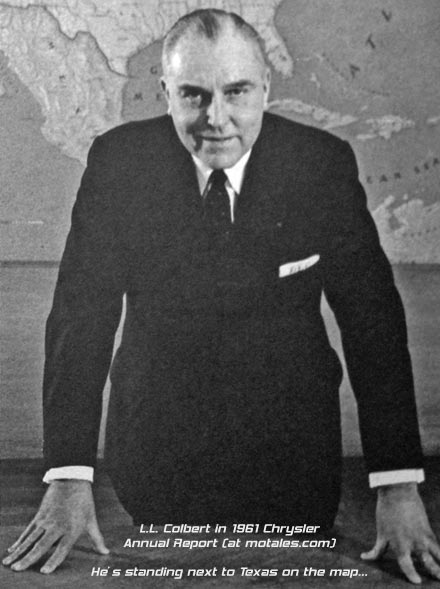 The board put Colbert’s administrative vice president (Lynn Townsend) in charge, with a new executive committee. The executive committee idea was taken from GM and Ford; Chrysler had used a single leader for the same function until then. Its chairman was George Love, chair of two other companies (one of which he left to take this post). All of the members were from outside of Chrysler.

Putting Newberg’s integrity aside, nearly as soon as he took office, he put in an emergency corporation-wide car downsizing on the basis of overhearing a GM executive mentioning the Chevy II, and thinking it meant GM was planning to downsize the regular-sized Chevrolet. Without trying to verify (or ignore) what he had overheard, Newberg ordered a disastrous crash program which resulted in extremely high retooling costs and odd-looking, less-competitive Plymouth and Dodge cars for 1962. President for just two months, Newberg spent a great deal of money to destroy an entire Plymouth and Dodge model year.

Newberg, in his suit against Chrysler, wrote that Colbert had known of his shares in the suppliers but was scapegoated as management was threatened with stockholder investigations. During his nine weeks as president, Newberg wrote, he found favoritism and nepotism; and he claimed he had been told he had a chance to become chairman of Studebaker-Packard—and that the settlement to pay back his outside earnings was essentially exorted by threats of criminal charges and financial ruin. Studebaker-Packard, in turn, denied offering Newberg a job. Chrysler counterclaimed that Newberg himself proposed the settlement after conferring with an attorney.

Lynn Townsend, appointed in 1961, would replace Virgil Exner with Elwood Engle; create the 5/50 warranty; create a new symbol to unite the brands; go global by buying French, English, and Spanish companies; and regain the youth market by leaping into muscle, resulting in the creation of the cars most associated with Plymouth and Dodge today.

L.L. Colbert, meanwhile, had his sinecure at Chrysler Canada until he reached the age of 65; then his pension, estimated by the New York Times (in 1961) at $92,250 per year, began. In 1970, Colbert’s wife died, and he started investing in oil and gas and fundraising for the University of Texas, his home state. He died in 1995, at the age of 90, as Chrysler was bursting forth in another display of growth and innovation; he was likely quite proud.