When the 1960 Chrysler, DeSoto, Dodge, and Plymouth sedans and coupes cars suddenly switched from body-on-frame designs to unit-body, it was a stunning move. The last unit-body Chrysler, the Airflow, had been an abject failure; yet the company was moving everything, not just one carline, down a new path (albeit one Nash had been down).

Al Bosley, who was in Body Engineering at the time, wrote what he remembered in February 2018.

As I remember the story/process/decision, there was no champion or driving personality behind the change from body-on-frame to unit body design. In some ways, it was a reaction to the many problems with the 1957-1959 designs that were recognized from their inception:

For some time, the advance groups in body design (Fred Grant), chassis engineering (Dave Dillman), and development design (Otto Winkelman) had been exploring unit body construction. Body suppliers Budd and Briggs had both submitted ideas for unit body cars. Some of the Budd proposals were inappropriate, since they followed the Nash pattern for the front; our structural loading, due to the torsion bars, was completely different.

A low floor was a strong driver of the change. GM tried an X frame, but that was dismissed for many reasons. 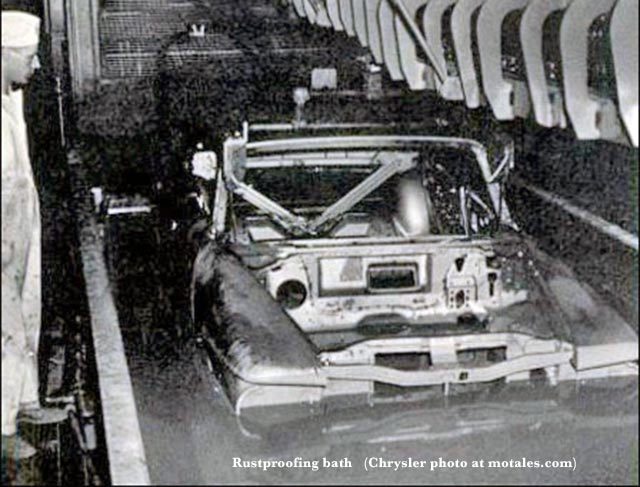 As I remember, the first decision was to go to body-dip corrosion protection for the new 1960 series of cars, because customer feedback suggested that the number one reason for non-repurchase was rust [This was a major issue on the 1957 cars—DZ]. This dip process created a need for much better drainage to clear the fluid after the dip, and for a stronger structure to withstand the loads of rapidly removing the bodies from tanks full of fluid (lifting the cars out of the tanks, with fluid draining out, required much more strength).

What would it cost?

Several cost estimates were reviewed; they were all over the map. An executive decision declared that the unit body design would save money, no matter what the estimators said, because a unit body would bring more content inside [Chrysler’s plants] and eliminate the profit made by the frame suppliers. Rough weight estimates suggested that for the same car the weight could be less, and increased rigidity could be achieved at no increase in weight with sophisticated design. (I now feel that they just wanted to do it.)

In the background, the corporation management and engineering was in new, young, well-educated, technically proficient hands. They brought a can-do attitude; and confidence in the staff and were tools were there. Many had war experience and knew that new tools were finally available to develop the product—improved methods of measuring stress, new shake rigs in the labs, and the Proving Ground to run tests. These all built confidence that “we can do it.” People like Harry Chesbrough, Alan Luofbourgh, and Bob Anderson come quickly to mind, but there were many others.

In the ’55 to ’57 period, I worked in Chassis Special Projects group and saw most of the minutes and meeting notes on future activities; I was tasked to order parts for, follow up on, and observe assembly of all the experimental vehicles built for demonstration purposes. These included several super-low modified 1956 cars with torsion bar front suspensions and coil rears, as well independent rear suspension versions. Most of the effort, though, was on prototype ’57 torsion bar test vehicles [the first unibody cars would come off the line in 1959, as 1960 models). 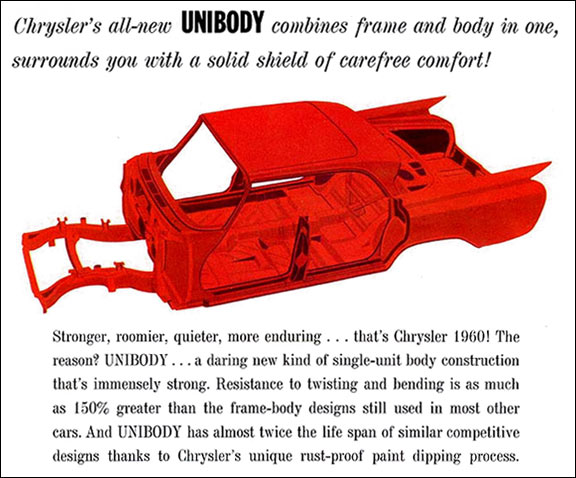 I am not sure how the final decision was made or who made it. By 1957 or 1958, when that decision was made, I was buried in general chassis, learning how to design axles, drive lines, shift linkages and clutches, and how to supervise a group of union drafters who were eager but wildly under-experienced (with a few exceptions).

After I moved to Midland and the Valiant Team, the full-size car body construction pattern was set and generally released to production: a unit body with a stub frame front. Bob Kushler, who worked as our advisor on unit construction, confirmed that the stub came about for the same reason as the “two part” construction of the 1934 Airflow: the inability of the full-length vehicles to make the turns at the Jefferson Avenue complex. Although the other plants could handle a full unit construction, for reasons of flexibility and the future possibility of rubber isolation, the company decided to do them all [except for the Valiant] as stub frames. The stub frame method probably saved tooling costs, since the processing in final assembly did not change significantly (as it did with the B bodies in ’62).

Moving to unit body put Chrysler in a body design leadership role; it did not strain our resources, and with the Valiant experience made the transition to full unit bodies in the ’62s easy.

Chrysler’s move to unit-body was extremely successful. Changing body styling had resulted in disaster for the 1957 cars; the more-dramatic change to Unibody seemed like a quality non-event. One reason was the engineers’ knowledge of just how major the move was, resulting in many tests. The image below shows a body model; one was made for every body shell the company wanted to develop. Engineer Pete Hagenbuch explained, that iw as “in clear plastic, a very accurate model of that car... you used to see these things everywhere. They’re looking for the high stress point, something where they need to smooth it up or beef it up, or both. That is something the computer does today.” 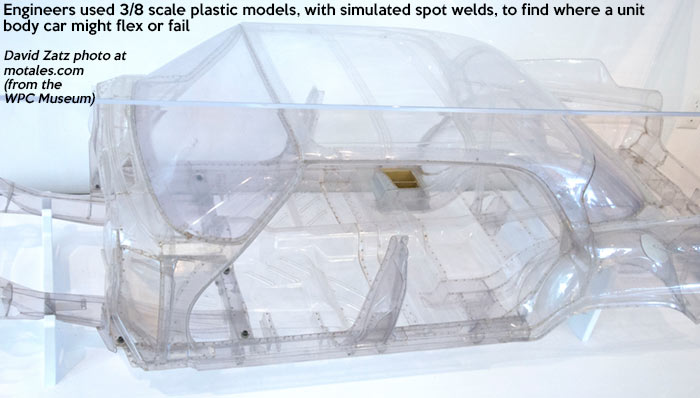 According to Chrysler, “In each clear plastic prototype, some 5,300 spot and seam welds and 61 feet of gas and arc welds were simulated.” The company also used computers “to evaluate countless different advanced design features and select the best ones for incorporation in the new cars.”

While Nash had done unit-bodies—as had Chrysler with the Airflow—these were the first whose exterior sheet metal was not required to provide structural strength. The 1934 Airflow still had a frame, albeit a weak one—body framework welded to the chassis. The 1941 Nash 600 was closer to the modern unit-body car. 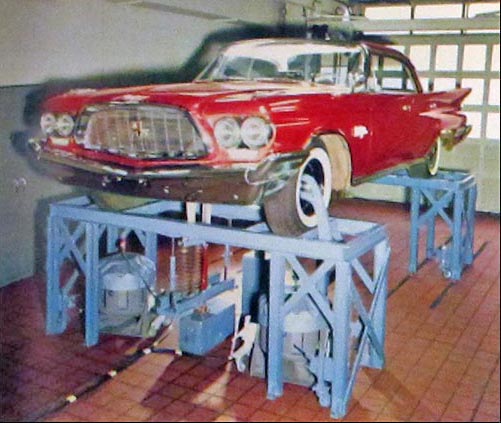 Unibody Chrysler being shake-tested in 1959

In any case, the result was a much stiffer body which had fewer squeaks and rattles, and far better handling—which would be a Chrysler characteristic among American cars for quite a few years. The floor could indeed be lower, adding headroom and making adding legroom easier.

The press release added, “the new four-door sedans show a 100% improvement over conventional body-and-frame construction in torsional rigidity (resistance to twist) and a 40% increased beam strength..... on the roughest roads at the company's proving grounds, prototype models surpassed all previous durability records. The new car structures withstood a gruelling night and day pounding from three to four times as long as predecessor models.” 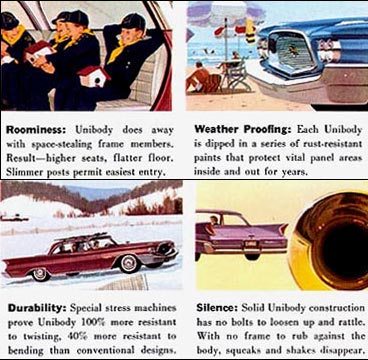 The cars did have a subframe holding the engine and front suspension, partly for ease of construction, partly to isolate sound and vibration (it could be insulated from the body), and partly to make it easier to replace the fenders. To resolve the problem of insulating the body from the frame, Chrysler used larger rear spring bushings and a special driveshaft which cut hum; extra sound deadener (matting and coatings) also helped.

Going back to the press release: “At the rear, fully boxed longitudinal framing members and transverse channel sections support the drive and rear suspension elements, adding to general body rigidity. ... Bulkheads are welded into the sills to provide even greater strength.

“Door pillars, too, are much stronger in this body. ... Nor is there any obtrusive projection of the lower windshield corner into the front door opening ... The entire cowl area is exceptionally rigid, rear pillars are stronger and there is additional reinforcing in the rear quarter areas.”

The Plymouth had over 5,400 welds; the larger DeSoto advertised over 6,000 (it’s unclear whether this was a function of size or price class). Police pursuit cars had extra welds for stiffness and durability, as well, for years.

Overall, the move to unit-body was a stunning success—it provided the right results, with no known glitches. That was no accident, but the result of a great deal of research and hard work—and not rushing anything, which was reportedly the problem with the disastrous 1957s. Chrysler had lived up to its reputation as the home of capable engineering.