It almost happened: the Eagle minivan and the new Chrysler LeBaron

Chrysler’s minivans were a major success, carving out a new and profitable segment; for 15 years, they also had extremely high resale values, rivaling those of the Wrangler. Eagle, on the other hand, was an abject failure for the most part. Intended to attract younger buyers who would normally buy imported cars, to fulfill sales obligations to Renault, and to provide AMC dealers with cars to sell, Eagle didn’t make much of an impression on buyers. The French cars it was supposed to sell didn’t do very well, to the point that the Eagle Medallion had to become the Dodge Monaco to satisfy Renault’s sales demands. 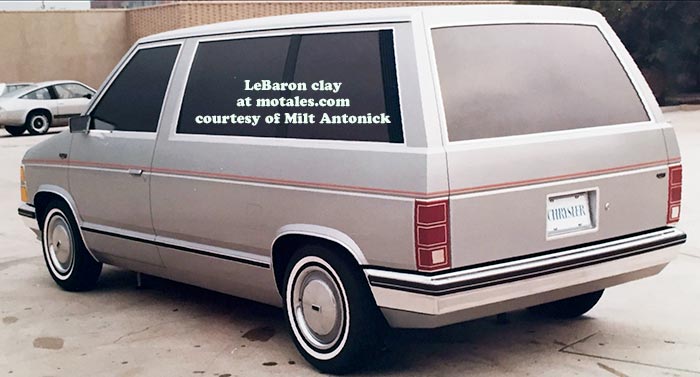 With those facts in mind, it’s understandable that Chrysler would develop an Eagle minivan.

The first minivans were Plymouth Voyagers and Dodge Caravans; there were few differences other than the grille and a firmer suspension on the Caravan (a tradition lasting until the 2008 models). A Chrysler LeBaron minivan was apparently planned before the minis actually went into production in late 1983; we only have a photo of the rear of a full-sized clay model now. Chrysler did get its turn with the 1990 model year, though the new Town & Country was simply a Grand Voyager with soft-gathered leather upholstery, every possible option set up as standard, including the 3.3 liter V6 and four-speed automatic, and a small “waterfall” grille.

The first new generation of minivans arrived in 1991; these used the same platform and architecture as the original 1984 models, but with more development time and a much higher budget. As a result, they felt like completely different vehicles; they were smoother, quieter, more luxurious, and, overall, more “engineered to the purpose.”

The Eagle minivan may have made it past the clay model stage, though it’s hard to tell a well-done clay from an actual car from photos. We have two photos of the Eagle, which appears to be identical to the Dodge but with a different, Jeep-influenced grille enclosing the new Eagle logo.

What was the goal of the Eagle minivan? Was it to give former AMC dealers something hot to sell to those who didn’t want Jeeps? Would it have a more aggressive suspension, like the Eagle Vision? Or did someone think it would somehow appeal to a new set of buyers? Was it, perhaps, a standby in case the 1990 Town & Country failed—if sales were too low, a high-end version would be sold as an Eagle instead of as a Chrysler? Was the idea simply to replace the Mitsubishi-built Summit, for the very few Summit buyers who might be coming back for more?

Any plans for an actual Eagle minivan failed to make it to fruition. The 1991 Town & Country was a more thorough job than the 1990, meriting the Chrysler badge; and the Eagle never appeared at all. The Eagle brand itself continued onwards; the Eagle Vision was one of the original LH cars, and it had a relatively small but devoted audience. The future Chrysler 300M was developed as the second-generation Eagle Vision, and only changed at the last moment.

Do you know more about the Eagle minivan? Let us know.