Bill Newberg was President of Chrysler for only two months; he resigned abruptly on July 1st. Rumor has it that he resigned after a fistfight with L. L. Colbert (Chairman and Bill Newberg’s mentor) in the locker room of Bloomfield Hills Country Club. A “few beers” probably had something to do with this altercation.

After Bill Newberg was named President, he met with the Chrysler Division National Dealer Council to introduce himself. The Council met twice a year, once in Detroit and once at a resort like Greenbrier or Broadmoor. He happened to attend a meeting where the Dealer Council requested an Oldsmobile 88-priced Chrysler model (they asked for this every year!). Bill Newberg responded that Chrysler would honor their request, and that we would do it in the 1961 model year—only a few months away!

I was the Resident Engineering Manager at that time, when we (Chrysler Division Resident Engineering) were told to “do it.” My boss, Chief Engineer Bob Rodger, said that the only way we could do it in this time frame was to build a six cylinder model of the Chrysler Windsor.

We built a prototype in the Jefferson Plant Engineering Garage by installing a Plymouth/Dodge six cylinder engine in a Chrysler Windsor. I took the vehicle for a test drive and within 10 miles I crashed it on the Ford Expressway. It turned out that when installing the engine, the mechanic (Whitey Erb) forgot to put a cotter pin in a steering tie rod end and the tie rod came off at 60+ MPH. Fortunately I did not hit another vehicle or a lamp post—I just plowed up an expressway bank. (Both front wheels splayed out when I touched the brakes so I lost steering control.)

The six cylinder Chrysler program was terminated on July 1 when Bill Newberg resigned—but during the 1961 model year, we did bring out an Olds 88 priced model. It was called the Chrysler Newport, priced at $2,964. So we did honor Bill Newberg’s commitment.

The Newport name came from the Rhode Island city known for its mansions; in the 1930s and 1940s, it was still a “playground for the rich.” The first Chrysler Newport was a series of six parade and pace cars made in 1940, followed by a dual-cowl 1941 concept car; then, in the 1950s, the name was used on Chrysler and Imperial hardtops (in 1956, Imperial switched to using the Southampton name).

The 1961 Newport’s styling was in line with other Chryslers. Lead designer Virgil Exner tended to dominate decisions about the look of the cars—he was much less inclusive than his successor. This became an issue when he was hospitalized with a heart attack before the cars were finalized, resulting in some odd designs which he would normally have fixed before production started. John Rush noted that the canted headlights were likely influenced by Lincoln’s. The Chrysler look was still more finished than that of the Dodge, because the 1961 Dodge was just about completely new, and the 1961 Chrysler was based on the 1960 design (indeed, the wagon kept the 1960 tail-lights due to its lower volume).

The Newport shared Chrysler’s unibody construction, torsion-bar front suspensions, leaf-spring rear suspensions, and rear wheel drive—common to all Chrysler Corporation cars since 1960, except some lower-production wagons and Imperials. From 1961 through 1964, Chrysler used pushbutton controls for the automatic transmissions.

Even beyond its architecture, the Chrysler Newport was, in essence, a rebrand of the DeSoto, Dodge Polara, and Chrysler Windsor; the Newport and DeSoto not only shared the same wheelbase, but also the same length, brakes, and tires. The wheelbase was also shared by the Dodge Polara and Chrysler Windsor. The Newport’s three-level dashboard with a translucent ribbon speedometer was taken from the Dodge Polara; other Chrysler cars, including the former-entry-level Windsor, had electroluminescent “AstraDome control centers” with huge, curved speedometers that incorporated other gauges in the area under the needle’s sweep.

The 361 cubic inch V8 engine (called both “Golden Lion” and “Firebolt”) was shared with the Dodge Polara and the DeSoto, with identical output (265 bhp, 380 lb-ft). The engine was a key difference from the Windsor, which ran a 305-bhp 383 V8; so was the lack of power steering, which was optional on Newport but standard on other Chryslers. The base transmission was a three-speed manual, with an optional automatic. (Other options included pushbutton radios, thermostatic heat, and auto-pilot, an early form of cruise control). 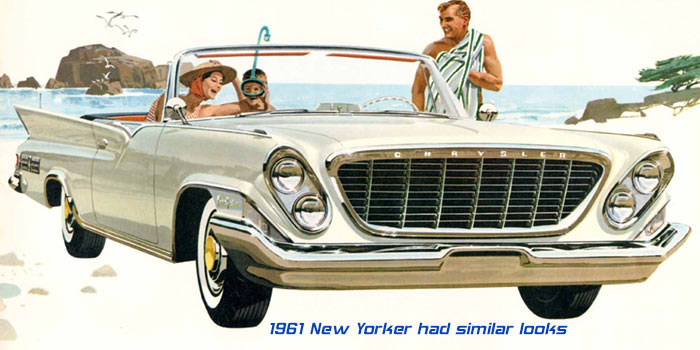 The front of the Newport and the Windsor were practically identical, creating the needed separation from Dodge and DeSoto. All Chryslers had a “High-Tower” driver’s seat that went up to shoulder level for extra support (the bench seatback was lower for the front passenger than for the driver).

All Chryslers had 14-inch steel wheels—but so did all DeSotos and Dodges other than the Valiant-based Lancer. Power brakes were optional on all the Mopars other than the Chrysler New Yorker, 300G, and Imperials, which had standard power brakes. Swivel seats were an unusual option, available on Imperials, New Yorkers, and Newport convertibles. Automatic transmissions were standard on the New Yorker and 300, and optional on 300G, Newports, and Windsors; likewise, Newports and Windsors had standard two-barrel carburetors while bigger Chryslers had four-barrels.

Polara and Newport had different side creases and rear-end styling though some of the themes were common to both. 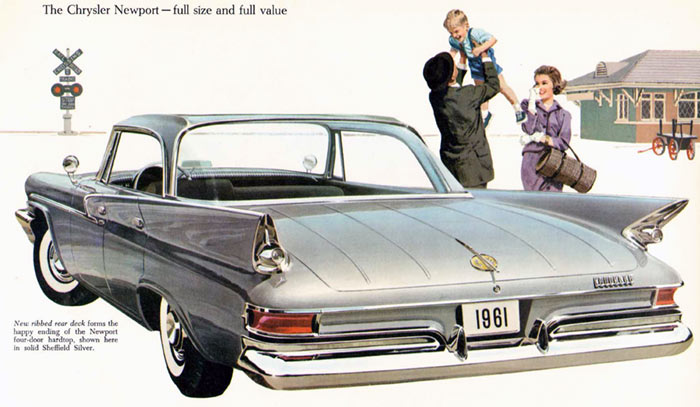 Reviewing the data, one has to wonder what the dealers really wanted from William C. Newberg—a new model seemed somewhat unnecessary; dropping the price of the Windsor would have provided about the same benefit, even if it meant reducing the trim quality or the number of standard features.

The Chrysler Newport quickly became the top-selling Chrysler-branded car; it shared the same platform as other Chryslers, but was smaller and had a lower trim standard. In essence, it went down into Dodge and DeSoto territory, competing against Oldsmobile as well as Chrysler’s traditional foe, Buick.

The 1961 Chrysler Newport won its class in the Mobil Economy Run, returning over 20 mpg across 2,500 miles. It was the basis for the single-year Chrysler Enforcer police car, which used the Windsor’s 383 V8 to run 0-60 in 8.3 seconds, with a sub-17 quarter mile.

In 1961, Chrysler made 57,102 Newports. That was more than double the number of their second biggest seller, the New Yorker, and more than half of total 1961 domestic Chrysler production (96,454). And no wonder—it had the then-prestigious Chrysler nameplate, while being cheaper than the comparable DeSoto (by $200) and Dodge Polara (by $5). While overlapping with the Polara was probably a mistake, DeSoto was in the process of being phased out, so the overlap made some sense; DeSoto fell from 26,081 cars made in 1960 to 3,034 in 1961, but it was the brand’s final year and the product line was down to a single car.

All in all, the Chrysler Newport was probably a mistake—though not of the same magnitude as Newberg’s more famous blunder, putting nearly every Chrysler Corporation car through a sudden downsizing after overhearing (and misunderstanding) talk of downsized Chevrolets. Newberg’s two months running Chrysler were not likely to be used as an example of strategic excellence.

According to Burt Bouwkamp, when cost accountants tore down the 1961 Oldsmobile 88, they found that it cost $85 less to make than the 1961 Newport, which sold at a higher price. Product planners convinced executives to spend $100 more per car on the 1963 Newport, which meant that they could have pleated seats, a carpeted trunk floor, wheel opening moldings, and other trim upgrades.

Cliff Voss designed the 1963 Chrysler. Burton Bouwkamp, then Chrysler product planning manager, wrote that it was “a great design on too narrow a rear track, because we couldn’t get the management to spend the money for a new rear axle housing. We did not put enough money in appointments - I cringe when I see the stamped grille that we put in the Newport.”

The 1963 restyling gave it a smoother, rounder look; and a five year, 50,000 mile warranty combated lingering quality questions from the 1957s. The public liked the changes, based on a rise in sales—but that’s a story for another day.