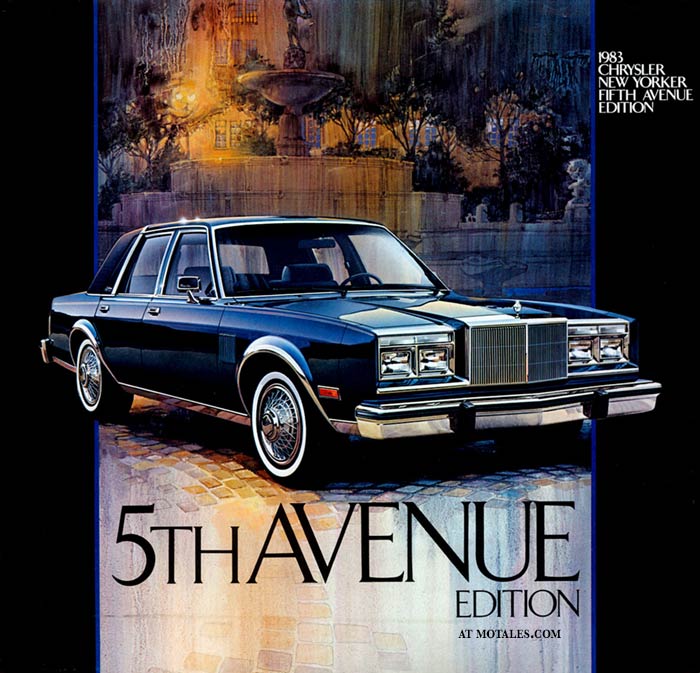 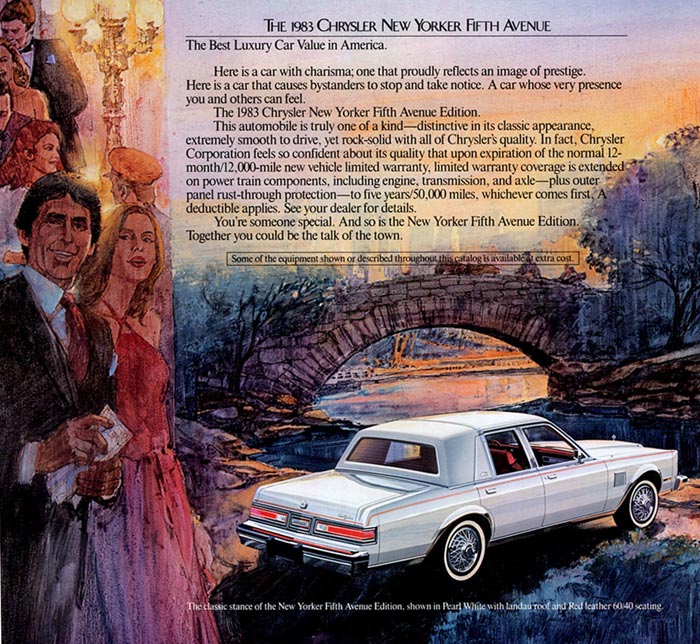 The Chrysler New Yorker Fifth Avenue was based on the 1977 LeBaron, which in turn was based on the humble Plymouth Volare (Dodge Aspen). The Volare and Aspen had new bodies and chassis for 1976, and because many relatively wealthy buyers were buying compacts during the fuel crises, they were more upscale than the old Valiant and Dart, inside and out, with a softer ride. The 1977 LeBaron version of these cars had a new body code (M, vs the Volare’s F), but it was essentially the same car, with a different windshield and cowl as well as much more upscale-looking sheet metal and interiors.

In 1982, the LeBaron name moved to a version of the front-drive economy K-cars, so the rear drive car became the New Yorker. In 1983, the New Yorker name was moved onto a front drive car, but the New Yorker Fifth Avenue Edition continued unchanged (later on, the New Yorker part of the name was dropped). These name changes likely confounded some owners looking for parts.

The LeBaron and later New Yorker were positioned as luxury cars, competing with the downsized 1977-84 Cadillac Seville and 1980-on Lincoln Versailles, but with lower prices. The Dodge Diplomat (and later the Gran Fury) became quite popular as police cars despite the luxury trappings after the bigger R and B bodies were dropped. The police were likely swayed partly by the four-barrel 360 V8, which was a police-only option in 1983-84; more convincing for many police departments were the sturdy chassis, durable powerplants, and traditional handling. Diplomats and Gran Furys dominated the police market into 1989. 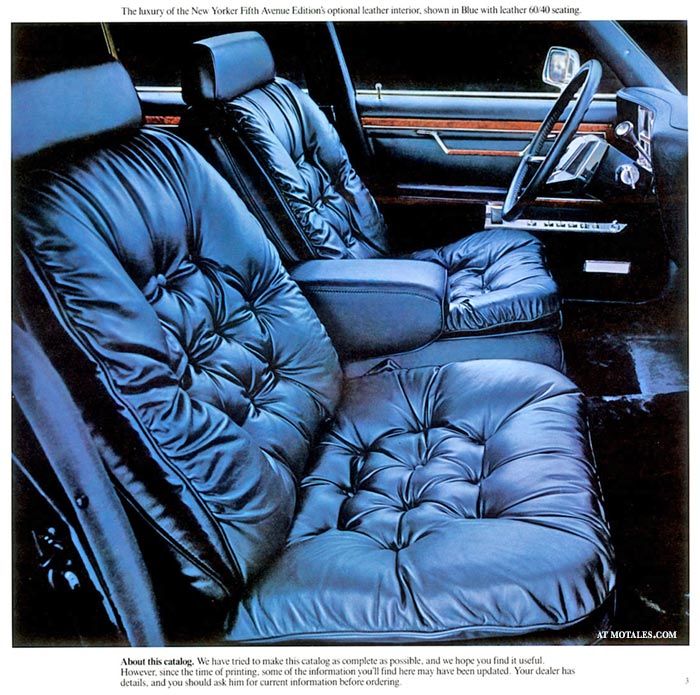 One has to admire the designers for creating a luxury car out of what had been an economy car; the Fifth Avenue certainly looked upscale, inside and out. Whether it felt like a luxury car was another story. Consumers Guide pointed out that the base engine was too small (it did not last past 1983 in the Fifth), but complained about the “limp ride and humdrum handling, dated dash layout, and poor mileage.” The ride was stiffer than in competing GM and Ford cars. They did praise the “smooth, quiet motion” of the powertrain and called the cars a good values overall. 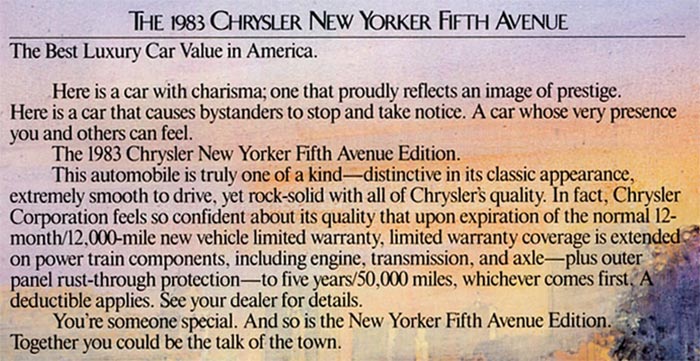 It’s impossible to know the success of a brochure, but Chrysler’s rather expensive New Yorker Fifth Avenue sold well in the United States; the company counted 73,829 sales, which made it the second most popular Chrysler after the much cheaper LeBaron. The Imperial, which cost more, landed 1,232 sales for the year; the Cordoba, which was on essentially the same body, only managed 10,291 sales. The New Yorker Fifth Avenue’s luxury positioning seems to have helped it. 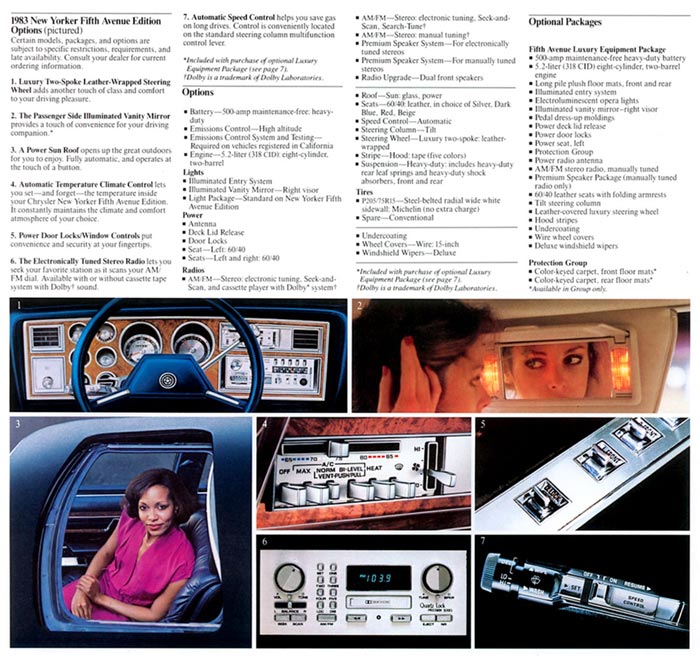 As for the rear drive mates of the Chryslers: the Dodge Diplomat saw 22,498 sales, the Cordoba-equivalent 1983 Mirada saw just 4,417; and the Plymouth Gran Fury had a mere 15,101 sales. It seems likely that most of the Diplomat and Gran Fury sales went to police departments, given that they had well over half of the market share in police cars; but there were almost certainly new New Yorkers in police use except, perhaps, for the chiefs. 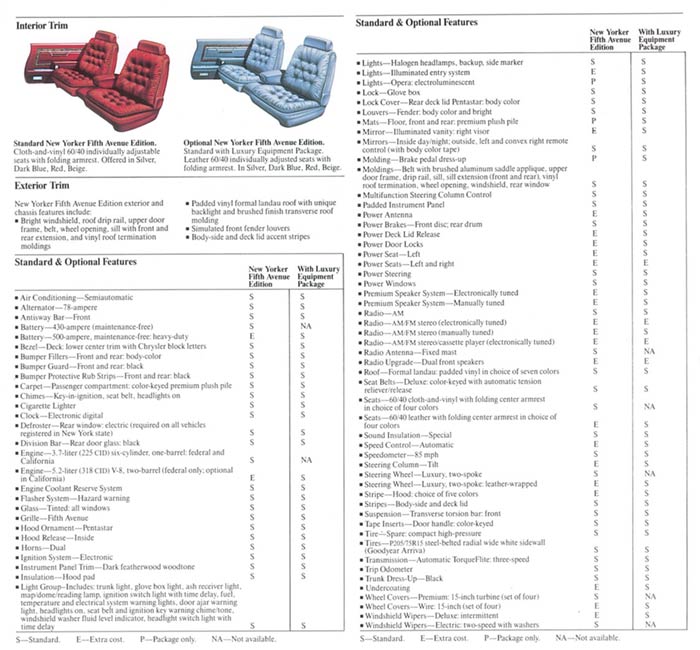 The brochure made much of the many standard features of the New Yorker Fifth Avenue, though they certainly padded the list which items such as a battery, alternator, front sway bar, bumper fillers, and so on. One particularly egregious item in their feature list was the car’s grille. 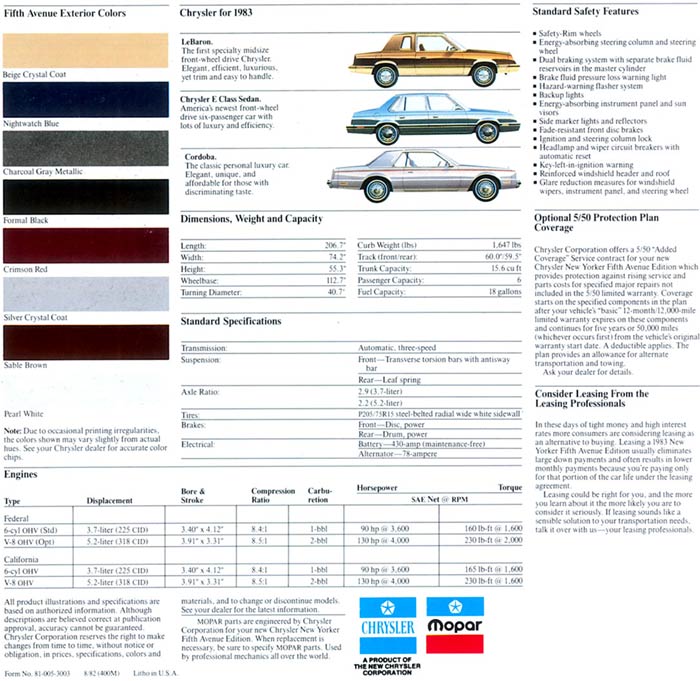 The specifications page included the power ratings, though chances are some people would have preferred to hide them. The listing of Chrysler cars for 1983 excluded both the front-drive New Yorker and the Imperial, both of which were certainly sold by Chrysler in 1983; the New Yorker came out later in the year, and the Imperial was a sort of separate sub-brand, given that it had been its own brand in 1974. It was not Lee Iacocca’s final attempt at resurrecting Imperial, either.

The New Yorker Fifth Avenue was surprisingly successful for Chrysler, and it would continue on for some time at AMC’s Kenosha plant—one of the last survivors of Chrysler’s once quite broad panoply of rear wheel drive cars.