Recently, we talked about the 1983 Chrysler New Yorker Fifth Avenue brochure, an oversized production of eight pages showing the luxury of a car based on the economy-oriented Volare—a car which had been sold as the LeBaron and New Yorker already, and would soon drop the “New Yorker” to become the Chrysler Fifth Avenue. Along the way, we talked about how the F-body Volare/Aspen were created and how the M-body cars—the New Yorker, Dodge Diplomat, and others—were based on them. 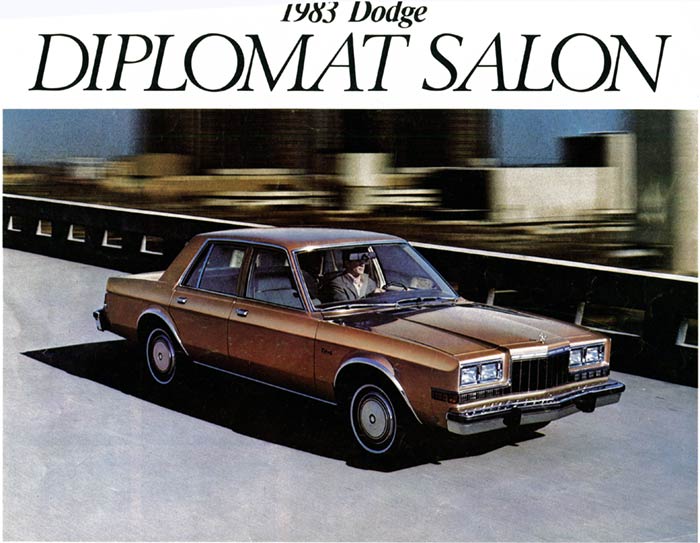 The Dodge Diplomat was mainly aimed at the same audience as the M-body Chrysler LeBaron / New Yorker / Fifth Avenue, and the looks were extremely similar aside from the grille and light placements (the headlights may have been the same), but the Diplomat failed to reach that exalted group, most likely because, for about the same money, you could get the more prestigious Chrysler name and a somewhat nicer interior. Police departments flocked to the Diplomat, though, which was both a blessing and a curse, because while some people liked driving the same car as the police, it took away somewhat from the luxury aura of the car. 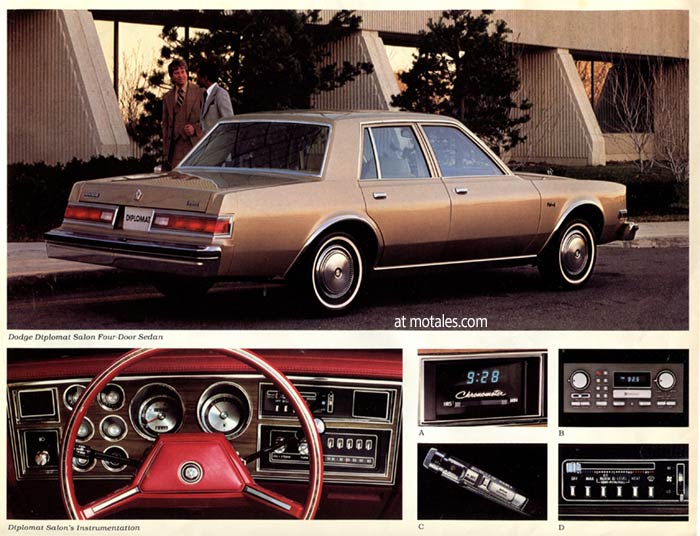 The cars shared dashboards and features, for the most part; little differentiated them from each other. Still, in the United States at least, sales of the Chrysler version were far over those of the Dodge every single year they were sold, from 1977 (when the Chrysler was dubbed LeBaron) to 1989 (when the Chrysler was dubbed Fifth Avenue). A Plymouth version, called the Caravelle, was unique to Canada; the American equivalent came some time later, taking on the name Gran Fury. (The Caravelle name referred to the sailing ship used on early Plymouths.) 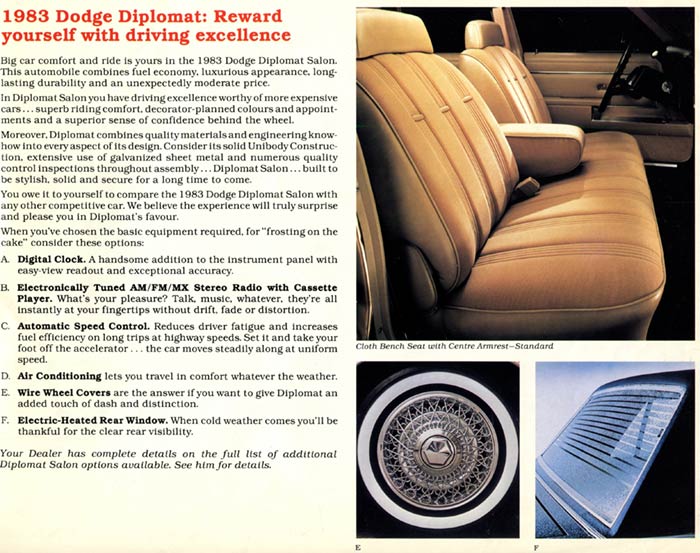 Sadly, we do not have Canadian sales figures from this period for the various cars, making it hard to judge whether the patterns set in the United States were matched by Canadians. Overall production figures are quite clear on the preference for Chryslers, but Canadian sales tend to be roughly 10% of those in the U.S., so Canadians might well have run counter to the American trends.

Regardless, the brochure certainly pushed luxury and “driving excellence”  with “big car comfort and ride,” promises the car itself may have had a hard time delivering. The cars were durable and could take a pounding, and the interiors were nicely trimmed, but their economy-car hearts could not be completely hidden on the road. Buyers did not get a Cadillac ride from the Dodge or Chrysler M-bodies. 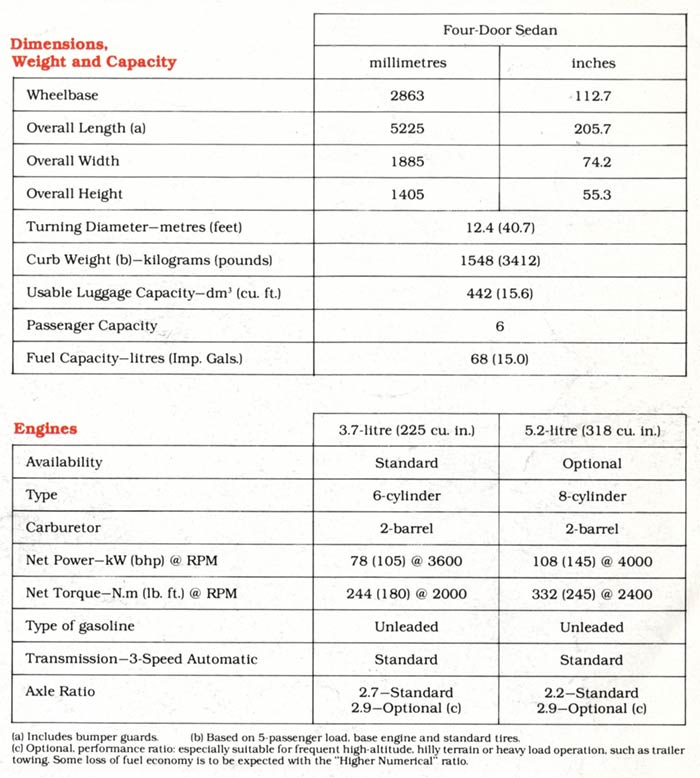 Relatively few specs were given; since Canada was going metric, buyers got both metric and English specifications. The fuel capacity was not given in American-style gallons, but in Imperial gallons, which are somewhat larger. Gas mileage is conspicuous by its absence. Canadian civilians were not given a four-barrel option for the 318 cubic inch engine, but they could, if they chose, get the 225 slant six—which delivered a 21-second zero-to-sixty-mph time. The V8 cut that almost in half, to around 12 seconds. The four barrel would cut it further, if it was available, but it wasn’t. The 2.2:1 axle ratio in the 318 must have made acceleration quite leisurely even with 245 lb-ft of torque on tap. 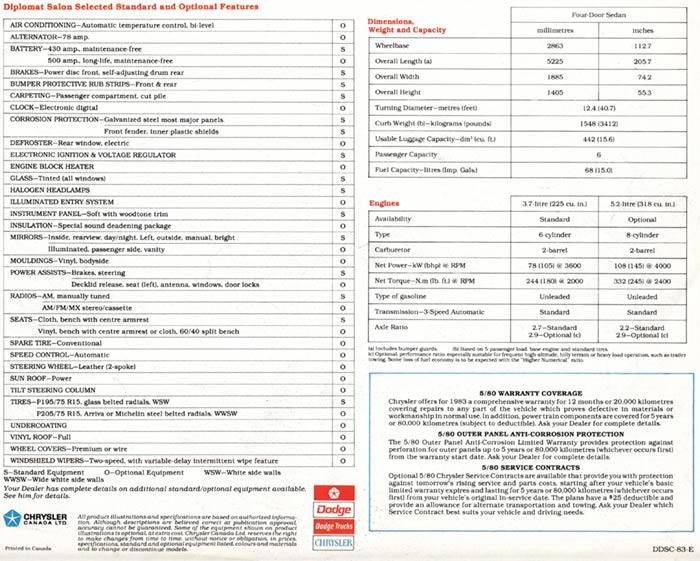 The specs were on the back cover, along with a list of standard and optional features; the company did not take as many liberties as it sometimes did with the standard-equipment list, leaving out things that were mandated by the government anyway. Items that did make the list but seem silly in retrospect, such as carpeting and AM radios, were not necessarily standard on all vehicles at the time; for carpeting, they likely wanted to specify that it was a higher grade.

The Dodge Diplomat may have been based on a fairly low-end car, but it was well trimmed and looked the part of a luxury car; they stayed in production into the 1989 model-year, despite production numbers that only exceeded 50,000 in two years out of their twelve. Perhaps if they had gained fuel-injected engines and other upgrades in the 1980s, they would have continued on into the 1990s; but in any case, the launch of the LH cars would have probably killed their popularity just a few years later.