Shortly after Chrysler bought AMC, corporate leaders realized they needed better truck engines. At that point, AMC and Chrysler both had 360 cubic inch V8s topped with carburetors; but Chrysler was already working on adding throttle body fuel injection to theirs.

Someone decided the solution was not a brand new V8, but a more powerful and modern version of the two LA-family Chrysler V8 engines, the 318 and 360. The leader of Jeep/Truck Powertrain, Chris Theodore, was charged with upgrading all three LA-family truck engines—a V6 based on the 318, and the two V8s. Theodore said, “they picked five guys from the Chrysler side and five guys from the AMC side,” moving some of each group to the others’ headquarters.  “We were all kind of like fish out of water.” Still, the team worked quickly and well.

The team didn’t see any need to change the engine block casting. The block had been through a series of evolutionary changes from the company’s original Hemi V8s, which had debuted in the 1951 Chryslers. Engineers had: 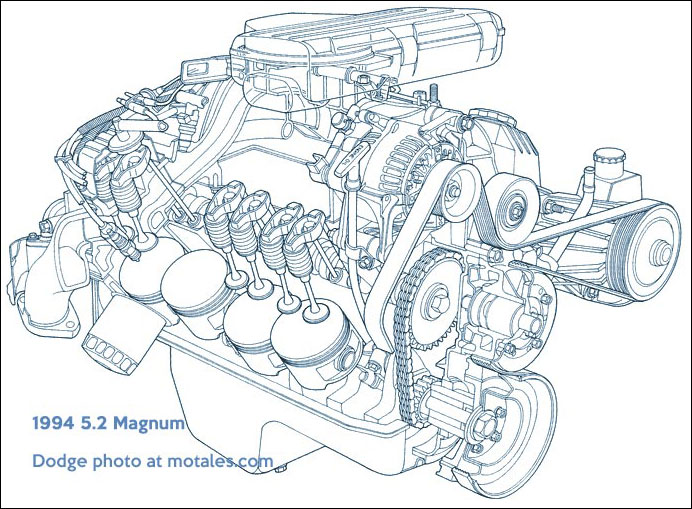 The only change to the block was not drilling out an oil passage for the rockers, because they sent oil though the pushrods instead. Using a block created in the 1940s speaks volumes about Chrysler’s engineering—both in the early days, and through time as engineers kept fixing flaws and finding new power and cost cuts. In any case, while the block was largely unchanged, they completely redesigned the heads, ignition, air path, and fuel delivery—while keeping the Hall Effect crankshaft position sensor and the manifold pressure (MAP) sensor (instead of a mass airflow sensor).

Theodore’s team switched to a modern sequential multiple-port fuel injection system; the injectors were in the intake manifold, but were far closer to the valves than before. Fuel pressure had to be much higher (rising from 12-14 psi to 90 psi), and injectors were fed by twin metal pipes dubbed fuel rails. 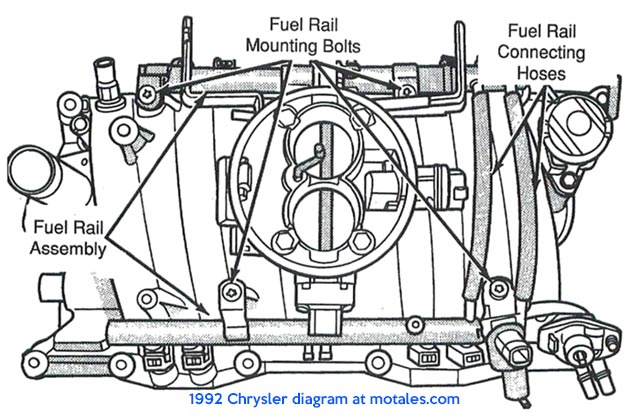 The system was run by a single-board engine computer which set ignition timing, fuel flow, and other factors based on sensor readings. The sequential fuel injection only operated an injector when its corresponding intake valve opened. The fuel flow rate was always the same, with the amount of fuel controlled by changing the length of time the injector was active (the “pulse width”).

During warmup, wide open throttle, and deceleration, the computer ran an “open loop” program, using manifold air pressure, engine speed, and air temperature to set the timing and fuel delivery. At other times, the computer also used oxygen sensor voltage to keep the mixture exactly right. The system shut off fuel injection when the throttle was closed (the driver wasn’t pressing the gas pedal) and the engine speed was over 1,200 rpm but decelerating, to save fuel.

The fuel pump was in a one-liter reservoir in the gas tank, designed to stay full as long as the engine was running. When the fuel level in the gas tank fell too low, a valve in the reservoir closed to make sure the pump wouldn’t suck air into the line. 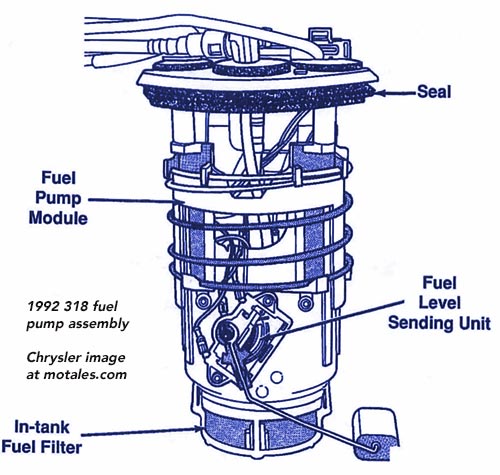 Fuel pressure was regulated by a relief valve on the fuel rail; when the pressure rose above 90 psi, the valve opened and excess fuel flowed back to the tank. At idle, a considerable amount of fuel was brought up front and sent back to the tank, warming the gasoline. Starting with the 1993 5.9 liter engines, and then following with the 1994 5.2 liter, the regulator was moved into the fuel tank, making the system returnless system and cutting about half the length of fuel hose running between the tank and the engine bay. The computer made up for transient drops in pressure at the injectors by increasing the pulse width (giving longer sprays).

The 360 seems’s long stroke made it a low-rev bruiser, though torque dropped off rather quickly past 3,500 rpm. The B-Vans and Dakota had slightly lower torque from the 5.2 (295 vs 300 lb-ft); the heavy duty pickups made peak torque with the 5.9 at lower revs (2,800 rpm vs 3,200 rpm in the Ram 1500) but the peak number was the same. The chart above appears to be from the heavy duty pickups. Note that the V8 and V6 engine charts are on the same scale; only the V10 has its own unique scale.

New heads, designed with computers, optimized fuel-air flow and swirled the mixture for cleaner burning. The barrel-type intake used a tuned plenum and 18.5-inch branches to create a ram-air effect, increasing power at middle revs for drivability. These changes were rounded out with lower-restriction exhaust manifolds and a progressive-bore throttle body.

Moving beyond the air path, the engineers redesigned the pistons and changed to pedestal-mounted rocker arms (with removable rocker arm studs), oiled through the pushrods; that meant new pushrods and lifters, too. To take advantage of the new fuel injection and air paths, along with other changes in technology, they tuned a new cam. Engine dressing updates included a new water pump and oil pan. Sealing was improved with a non-asbestos head gasket, new crank rear seal, and new thermostat housing. The air cleaner and intake ducting were shared between the 5.2 and 5.9 engines, as were most other emissions controls—dual oxygen sensors, mufflers, and catalysts. The 5.9 engine had an air pump for emissions; vehicles over 10,000 pounds had two of them. The 5.9 also had unique lightweight pistons.

The 5.2 moved beyond pickups and vans: the 1993 Jeep Grand Cherokee, a premium off-road-capable SUV used the 5.2 as its premium engine. To make the engine fit, engineers used changed out the oil pan and exhaust manifolds and added heat shields; they also used longer spark plug boots with heat shields. The air cleaner was remotely mounted rather than sitting atop the engine. Air path restrictions cut power to 220 hp and 285 lb-ft of torque; but it was still enough, compared with the 4.0 six-cylinder, to drop 0-60 times by around 14%, with better gradability and trailer towing. Gas mileage was rated at 14 city, 18 highway with the 3.55 axle.

For 1994, a new 5.2 cam raised the torque rating to 300 lb-ft, but dropped horsepower down to 220. The press release noted this was to increase driveability—the new cam added up to 30 lb-ft of torque below 3200 rpm; that provided for better launches and fuel economy (since the transmission could stay in higher gears, and because more people could use the 3.21:1 axle ratio). It also didn’t hurt to have the 5.2 and 5.9 engines with different horsepower numbers.

The Dakota and B-Vans, with their restricted air paths, only managed 295 lb-ft of torque, but the horsepower ratings were unchanged. For whatever reason, the Ram 3500’s 360 had peak torque at 2800 rather than 3200 rpm.

Other changes for 1994 included a new throttle body and throttle body cable cam, which smoothed out the transition when drivers started pressing down the gas pedal. A new oil pan and air cleaner were needed to fit into the new 1994 Dodge Ram 1500 engine bay, and a screw-type oil filler cap replaced the old slot-in-and-turn-a-little design for better sealing. The catalytic converters moved closer to the engine, for faster activation. On the electronics side, onboard diagnostics for all cars sold in the U.S. obeyed California rules by turning the Check Engine light when certain faults were detected.

For 1995, a new LA engine appeared in Dodge trucks—the big V10, based on the 360, with two more cylinders added; an aluminum-block version of this engine had already been produced for the Viper. This would, by far, be the highest-output LA engine ever made, outpowering even the legendary 426 Hemi. But it’s not really part of this story.

The 5.2 itself had a new CNG (compressed natural gas) version, used with the 1995 Ram pickup and B-van; developed by Chrysler Canada, this in-house package was optional midyear, and traded off power for low-cost fuel, especially handy for utilities. Quite a few changes were needed to run off natural gas.

In 1996, Dodge Truck moved to the JTEC powertrain computer; the Magnum engines gained OBD II on-board diagnostics, using a standard connector. Exhaust gas recirculation (EGR) was no longer needed and was dropped—entirely for the 5.2, and midyear for the 5.9. Power output and fuel economy were identical to the year before, for both engines (according to the press book: with RWD and an automatic, in the Ram 1500, the 5.2 was rated 13/17 mpg and the 5.9 was rated 12/16). Buyers wanting better mileage could still get a stick-shift with the 5.2—that increased mileage to 14 city, 19 highway. The Dodge Dakota 5.2 was rated at 14/18 mpg with the automatic, 15/20 with the manual. 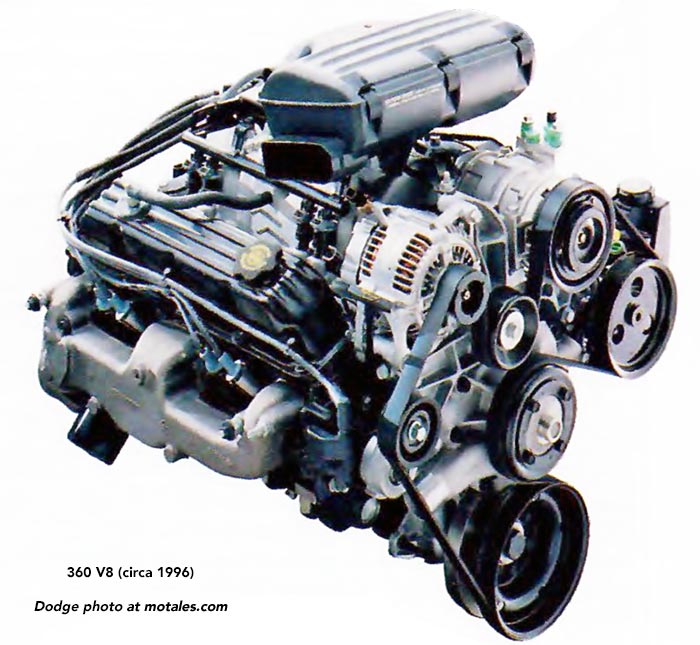 The 1998 Grand Cherokee, the last model-year for the original design, debuted the 5.9 engine as part of a special Limited model. Likewise, the 1998 Dodge Dakota, which normally topped out with the 5.2, also had the 5.9 liter engine as an option. It was a good time to add the 5.9, since it had just gotten a power boost; in the Dakota it was rated at 250 hp and 345 lb-ft of torque, and in the 1998 Ram pickup it was rated at 250 hp and 340 lb-ft. The increases were credited in Dodge press releases to a new camshaft. 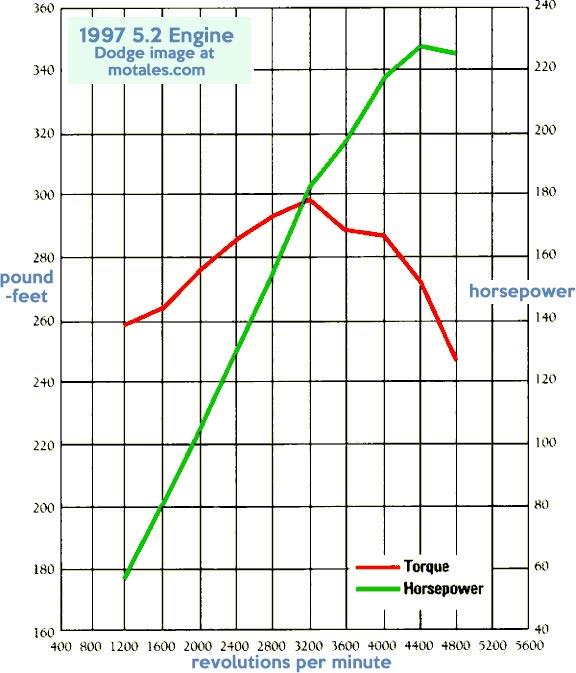 Despite these power boosts, two new engines were in development. One, dubbed the Next Generation V8, was a 4.7 liter design aimed at replacing the ancient AMC 4.0 liter straight-six, a highly respected and durable engine which produced far more power than most of its competitors—American and Asian alike—when it had first been brought out. It was paired with a new V6, the 3.7, which was meant to replace the AMC 2.5 liter four-cylinder. The 4.7 V8 was launched on the 1999 Grand Cherokee; it replaced the 5.2 in the Dodge Dakota the following model-year. The 4.7 was good for 230 hp, though some complained it needed to be revved more to make that power; and it was cheaper to make than the 5.2 but better for emissions and fuel economy.

The 1999 B-vans got the hot 5.9 cam a year after other Dodges; with their tight engine bay, the big vans “only” saw 245 hp and 335 lb-ft. The 5.9 also continued as the 2000 Dakota’s top engine (though it left the Grand Cherokee). The 2001 Dodge Ram pickups were the last to have a 318 cubic inch engine; for 2002, the 4.7 liter “Next Generation” V8 lived up to its name and replaced it. The 5.9 remained in pickups, for those needing more power or wanting much more low-end torque, while the 5.2 remained an option in B-vans, still made in their traditional home on Pillette Road, Windsor, Ontario. 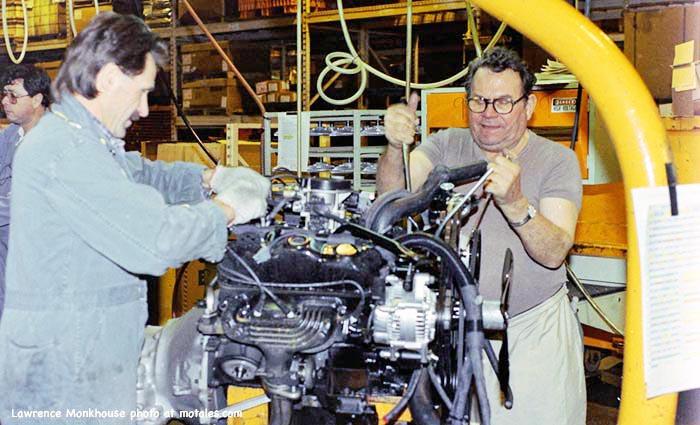 Getting a Magnum engine ready for installation on a B-van

The venerable 5.2 liter, née 318 cubic inch, engine had enjoyed a rather amazing run at Chrysler, especially if you counted the A-type 318 before it—lasting from the 1957 Plymouth Fury to the 2003 Dodge Van and Wagon, a nearly half-century run. The LA 318 had been launched in the 1967 cars and trucks, 34 years earlier. In vans, the engines were dropped in favor of Mercedes gasoline and diesel engines in the Sprinter commercial vans, which replaced the B-vans. In pickups, the 5.2 had already been replaced by the new 4.7; and a new engine had arrived to replace the 5.9 at last. 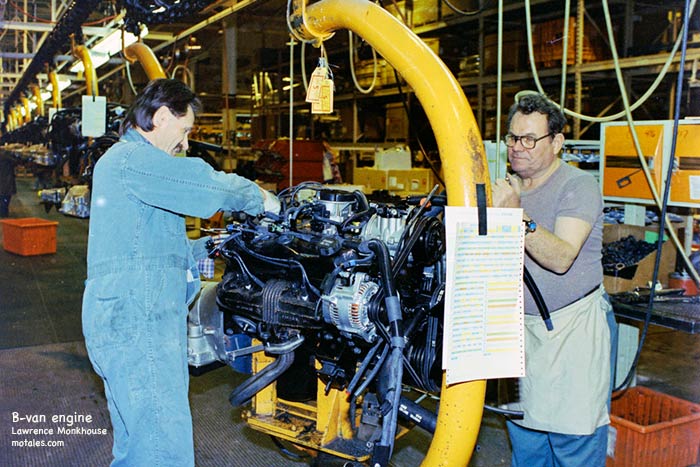 The 2003 Dodge Ram pickups’ 5.9 liter V8s were downrated slightly, to 245 hp and 335 lb-ft, with 8.9:1 compression; but their replacement, the 5.7 “Hemi Magnum,” was not just cheaper and more fuel-efficient, but also 60 pounds lighter and boasting output a full hundred horsepower greater. The 345 cubic inch Hemi V8 produced 345 hp and 375 lb-ft of torque in its first generation. In the Ram 1500 (automatic), it was rated at 14 mpg city, 18 highway—better mileage than either the 5.2 or the 5.9. The LA engines’ time had finally passed; an engine worthy of their baton had finally arrived.