In Chrysler’s hemispherical-head V8 engines, each cylinder had two big valves operated by twin rocker arms. While this was an efficient system, the valvetrains were slow and expensive to build; and Chrysler quickly realized they needed a cheaper, higher-volume V8 as well. 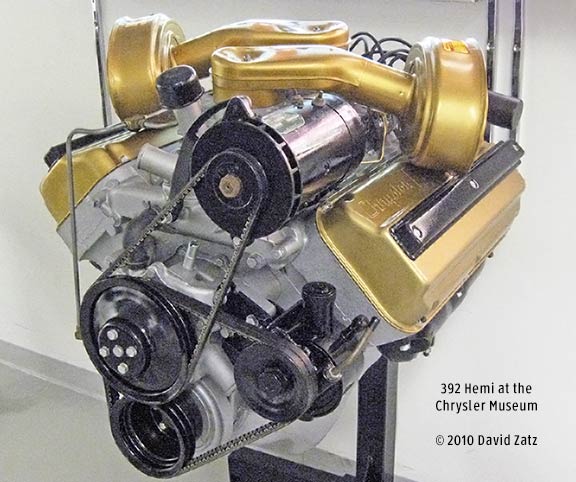 Willem Weertman, in his Chrysler Engines book, pointed out that the company needed to replace the 1930s six-cylinder L-head engine; rather than building a Hemi V6, which would have been a hard sell Buick, Pontiac, and Oldsmobile V8s, executives decided to make a cheaper engine from their existing design. This engine could also be used in the 1955 Plymouths. 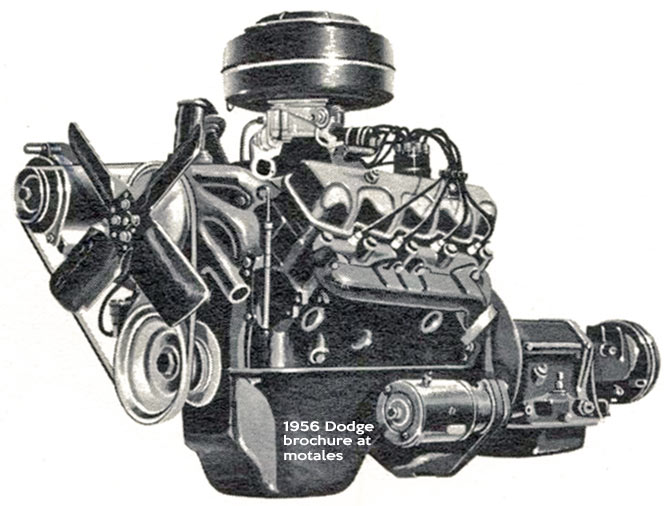 To reduce costs, the company simplified the combustion chamber; it was still rounded, to avoid detonation and carbon deposits, but now it was cast rather than machined. They saved money and effort by having one rocker arm shaft activate both the intake and exhaust valves, with the top of the arm acting on the intake valve and the bottom acting on the exhaust valve (cutting out eight rocker arms per engine).

The valves still had a cross-flow arrangement; engineer Pete Hagenbuch commented, years later, “The design was supposed to maintain the characteristics of the true Hemi but with one rocker shaft per cylinder.” All taken together, it was a “semi-hemi” design (before the “Hemi” trademark was made—at that point, the hemispherical-head engines were called “double rockers.”) 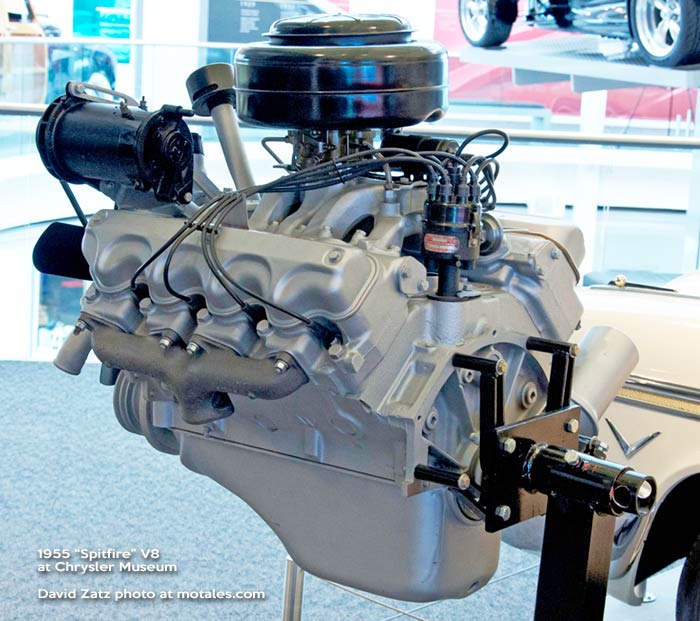 There were some clever features, such as low friction valve locks which let the valves rotate for longer life; hydraulic tappets so the valves did not have to be adjusted; and scalloped valve covers for access to the spark plugs. High-revolution power was lower than in the Hemi, but they provided good low-end torque at a low price. The block itself was unchanged, and for the most part the bore and stroke were shared with the Hemis.

For 1956, Chrysler expanded the bore, increasing the size to 331 cubic inches and yielding 225 bhp and 310 lb-ft (for Dodge trucks, which used a modified 331, the listed numbers were 153 bhp and 268 lb-ft, due to lower compression). As one might expect, the bores now matched those of the Hemi versions to save on tooling; the big question is why the first poly was a 301. 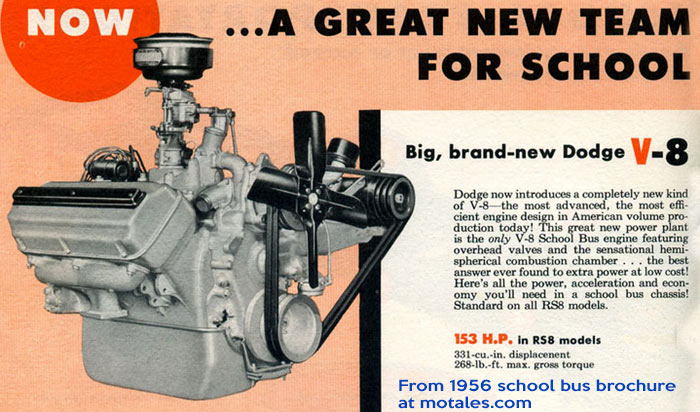 In 1957 Chrysler bored out their poly again, to 3.94 inches, bringing displacement to 354 cid—matching their Hemi again. The 1957 power ratings were a hefty 290 bhp and 385 lb-ft, while the four-barrel was rated at 310 bhp, 405 lb-ft. The Hemi version was rated at up to 355 brake horsepower and the Poly version at 310; but it’s hard to know, now, how truthful those ratings really were. Each one being a round number does not inspire confidence. In any case, the Hemi design had a power advantage at high rpm, but the Poly was much cheaper and lighter.

Dodge had their own poly engines; the A388 was similar to the Chrysler poly, but its shorter stroke brought a 270 cubic inch displacement, maintaining corporate distinctions. It was topped with a two-barrel carburetor and rated at 175 hp—similar to the 331 Hemi. Dodge also released a 259 cubic inch poly for its cheaper cars, with a rated 169 hp and 243 lb-ft at 7.6:1 compression. 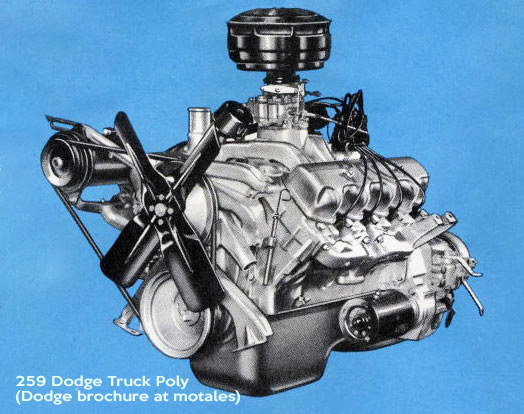 Dodge provided Plymouth with V8 engines while the company built a new engine plant for their value brand. The Plymouth exclusive was the 241; head of Engineering James Zeder wrote, concerning this engine, “We are not seeking to develop higher speeds and greater power than anyone else,” and the 241’s minor advantages over the old 260-cid L-head six support that sentiment.

Possibly because Chevrolet and Ford V8s both had a claimed 162 bhp, while the 241 was only good for 157 bhp, the 241 was dropped in mid-1955. That left Plymouth with the 175-or-177-bhp (depending on the source) “260”—as Plymouth claimed in its ads, the highest-powered standard V8 in the low-priced field, with a five-bhp advantage.

Midyear, the Hy-Fire gained an optional power package—a four-barrel carburetor and dual exhaust—which brought power up to 177 bhp and 231 lb-ft. It was not part of their original plan, but a reaction to Chevrolet’s more powerful V8s. The Power Pack had a Carter WCFB carburetor with metering rods on the primary jets and velocity valves regulating airflow to the secondaries; Chrysler claimed that they worked with Carter to develop the WCFB (White [metal] Cast Four Barrel) for the FirePower V8 (it was also used on 1955 GM and Hudson/Nash cars, and Carter had started selling four-barrel carburetors to GM in 1952). The WCFB was later replaced in 1957 by the AFB (Aluminum Four Barrel) [see Carter history]. 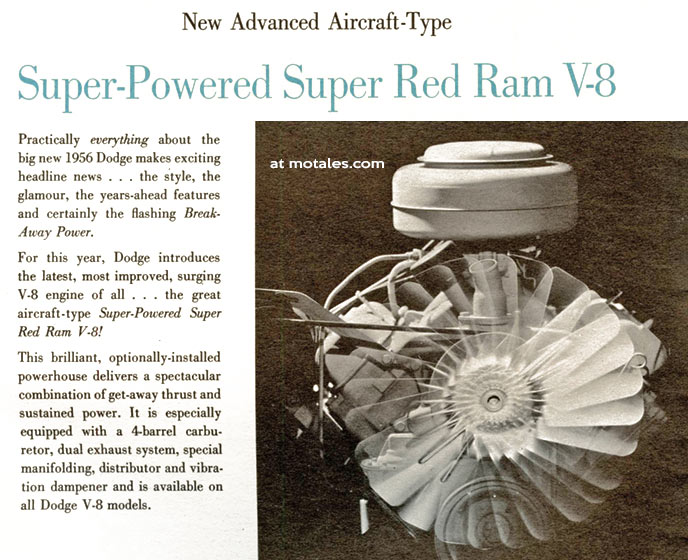 In 1956, Plymouth used both the Dodge V8s and the new A-series V8s made in their new, highly automated Mound Road factory. In 1957, Dodge’s V8s were limited to the 325, and Plymouth had switched its V8s entirely to the new Mound Road series.

Dodge had a bigger version of their poly V8 for the 1957 cars, now shared with the DeSoto Firesweep (essentially a rebadged Dodge, made at the Dodge Main plant). Under DeSoto, power ratings were the same, but the name was changed to Firedome (which had been their name for the Hemi). Dodge Truck used a related name—Power Dome.

The new 325 cubic inch engine kept the 315’s stroke, but widened the bo 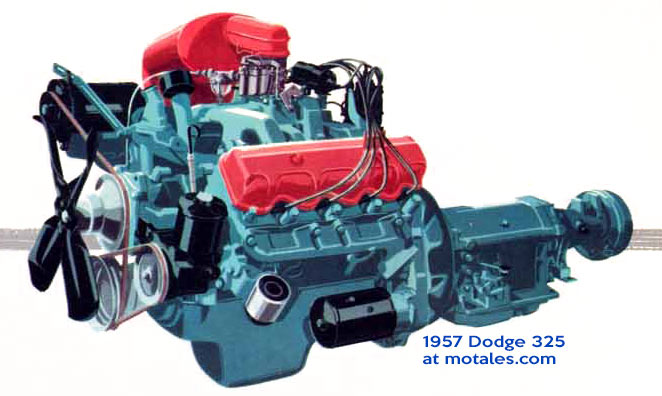 The Poly engines were not meant to be temporary, but the need for much higher volumes forced the issue. Chrysler started a program to adapt the Poly for higher, cheaper production—the A engines—and then another program for brand new, big-block wedge-head engines that could easily and cheaply be mass-produced. Plymouth switched to the new A engines as soon as they were ready (1956 model year), and Dodge followed. Then the B-engines replaced the Hemis for Dodge, DeSoto, Chrysler, and Imperial, later making their way to Plymouth as well.

The Poly would be the last Chrysler engine to have different versions for the various divisions, with a massive panoply of unique parts for similar cars—for example, the Chrysler and DeSoto Hemi V8s had different cylinder spacing, deck heights, main journals, valves, valve angles, and crank pins. Chrysler made its own V8s at Jefferson Avenue, DeSoto made theirs at Warren Avenue in Dearborn, and Dodge made their own at Dodge Main, while the Mound Road Engine Plant was to make Plymouth V8s. By creating a central engine group in 1958, Chrysler centralized both design and production; Mound Road would make all A engines (in the United States), while Trenton Engine would produce all B and RB engines and, later, all the slant sixes. From 1955 to 1958, Chrysler Corporation had made no less than eight different displacements of the poly engine family. They would not make that mistake again.

The Hemi/poly blocks themselves were modified substantially to improve oil delivery and cooling, and to transition to automated factory machinery; but the basic block design lived on into the next era thanks to the A engines.

Cylinders were numbered starting from the driver’s seat, then front to rear, 1-3-5-7 left side, 2-4-6-8 right side, with a firing order—same as the Hemi—of 1-8-4-3-6-5-7-2. Valves were arranged in the head, activated by rocker shafts; timing was chain-driven. The oil pump was driven by the crankshaft; oil filters had replaceable elements but were not full-flow. The crank was fully counter-balanced. Pistons were a tin-coated aluminum alloy with steel struts and bands; each weighed 18.6 oz. Valve guides were cast into the head.