by Ryan Dodd and David Zatz

The first Dodge Durango, based on the Dakota pickup, was—like most Chrysler cars of its time—a critical and sales success. The second-generation Durango, launched in 2003 for the 2004 model year, was more of a mixed bag. It started out with a bang, driving sales up—though not to the Durango’s 1999-2000 peaks; but then sales started dropping off a cliff. 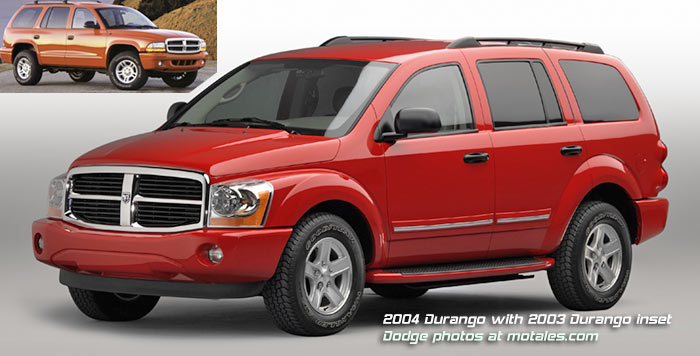 The Durango was still based on the Dakota—this time, the Durango came first, though, before a bigger, less popular Dakota. The second-generation Durango was 7 inches longer, 3 inches taller, and 2 inches wider than the first generation; its third row could now seat three people, increasing capacity from seven to eight passengers. The original’s sporty design language was replaced by upright, boxy styling, ostensibly to increase interior space. Dodge claimed the vehicle was “all-new ‘from the ground up’.” 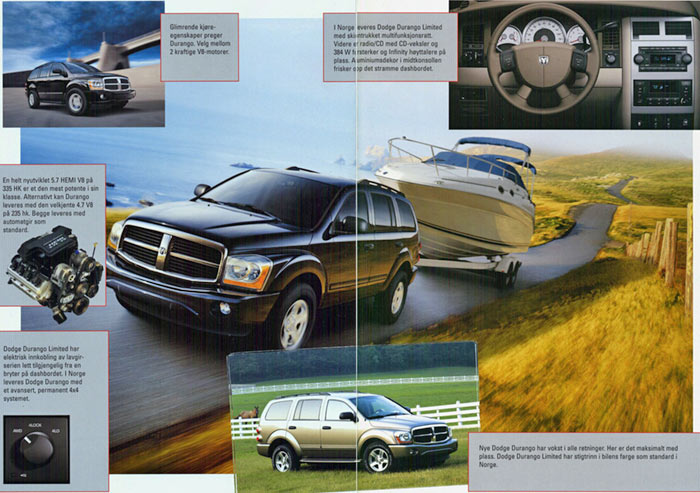 * The numbers in the chart are from 2005 because some numbers in the initial release were likely estimated—the 2004 press release boasted higher power ratings for the 4.7 and 5.7 V8s. The 4.7 was later listed as having 300 lb-ft of torque.

Given the new Hemi V8’s rather impressive-for-the-time power, the Durango set acceleration and towing records for the class. It also had (with the V8) a “Tow/Haul” mode for firmer shifts and reduced gear searching when towing; Tow/Haul also downshifted when going downhill, when needed, for better engine braking.

Inside, the new Durango featured laminated (acoustic) side glass, a new instrument panel, a rear entertainment system, a sunroof, cellphones connectivity (UConnect), and a new Infinity sound system. Enough people liked the changes, the most impressive of which was probably the addition of the Hemi V8, that 2004 was the second-generation Durango’s best sales year; that includes a few months of 2005 Durango sales, since sales years start on January 1 and model years usually start on September 1.

The 2005 Durango had two new trim levels below the SLT, dubbed SXT and SLT Adventurer. The SXT had roof rails, running boards, and side moldings, while the Adventurer included a Thule roof rack, side steps, slush mats, cargo liner, and new wheels. New options were navigation, stability control, remote start, and a power liftgate. On every model without leather, heated cloth seats were standard. Some models had new wheel choices.

The 2006 Hemi V8 engine gained cylinder deactivation to boost fuel efficiency; the system had already been used on the Dodge Magnum and Chrysler 300C, and shut off four cylinders when full power wasn’t needed, restarting them in fractions of a second on demand. Most drivers could not tell the difference between four and eight cylinder modes; the system continued on Hemi V8 engines to their very end.

Since critics had reacted to the original looks with disdain, DaimlerChrysler refreshed the Durango for the 2007 model year. In addition to adding big new side mirrors for towing, they designers made a new grille, hood, and fenders, with squared up headlights replacing the bubbly 2004-2006 style. The main external feature of the refresh was getting rid of the “dropped fender”  look which had worked so well on the 1994 Ram 1500 (and the original Durango); raising the fenders also hid the all-too-visible line between the hood and fender. Finally, a 2007 Chrysler Aspen model joined the Durango, sucking away some sales of the facelifted model.

The Limited had a new leather-wrapped console lid and ultrasonic rear parking sensors. Quad bucket seats, optionally heated, were now optional on the SLT and Limited; and stain resistant cloth seats were standard on the SLT. The 4.7L V8 added flex-fuel capability for the 2007 model year to gain CAFE credits.

For 2008, the Hemi system had worked so well that its heads and fuel and ignition systems were adapted to the 4.7 block, upgrading the 4.7L V8 engine rather impressively to 303 horsepower and 330 lb-ft of torque. A new, single-speed transfer case was optional on some 4WD models. MyGIG infotainment (named after its one gigabyte of spinning hard drive music storage, which copied music from CDs) and a back-up camera were added to the options roster. 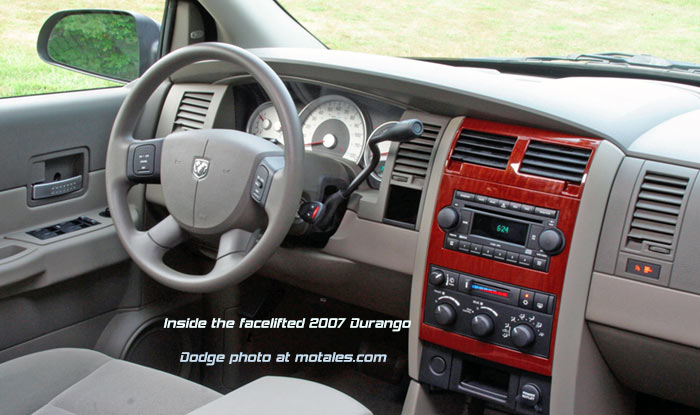 The second and final generation of the 5.7 Hemi joined the 2009 Durango, upgrading output with just a 1 mpg drop in economy; it had higher compression, an active intake with two runner lengths, better head flow, and lower restriction air paths, along with a dual-mass crank damper, floating-pin piston design, new valve springs, and higher capacity oil pumps. For whatever reason, while pickups were rated at 390 hp, the Durango’s Hemi was only rated at 356 hp. The 3.7 V6 was available but is not in the chart below:

This was the only year of the Hemi Hybrid setup on the Durango. A GM-BMW-DCX partnership, this system used a two-mode, variable-ratio transmission with twin electric motors to increase gas mileage by around 25% on the highway and 40% in the city; it included regenerative braking. The setup was surprisingly effective given that it added power and did not require much redesign; but the still-low mileage figures left the media, and customers, unimpressed. City mileage went from 14 mpg to 20 mpg, which was impressive; but highway mileage only went up 2 mpg, to 22 (buyers also had an extra 29 hp but the truck was somewhat heavier). 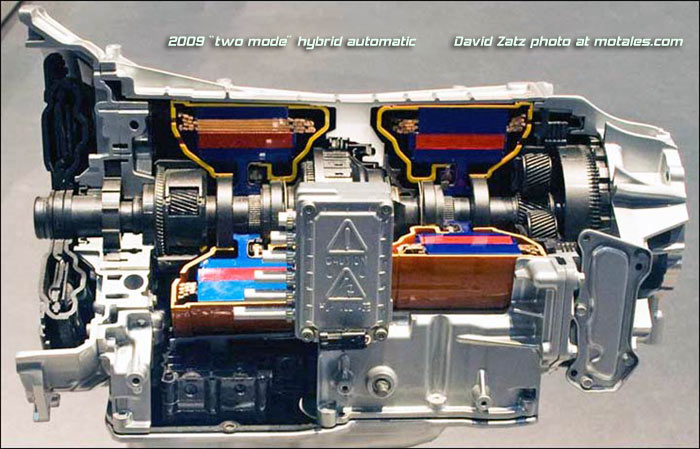 The hybrid would be a major savings in fuel, since city mileage is usually more important than highway mileage for most buyers (since highway mileage is usually higher, automakers and buyers alike generally over-use it in comparisons). In any case, the Dodge Durango Hybrid (and similar Chrysler Aspen Hybrid) failed to get a following; many of those who wanted better mileage moved to sedans or minivans, and the hybrid was also introduced as gas prices were (temporarily) falling. Chrysler permanently dropped the system, not even moving it to the Ram. If Cerberus had kept it going, the hybrid might have been more popular as gas prices did, temporarily, rise again.

I reviewed the 2004 Durango and the 2009 Chrysler Aspen when they were new; the Aspen was essentially a Durango with a more upscale appearance, including nice-looking but rock-hard seats which felt like concrete park benches wrapped in leather.  Based on the specs, I optimistically said it raised the bar for full-sized SUVs; the Hemi and suspension design were major attractions. People (including me) looking at the awkard shape tend to forget that.

The engines had been dramatically upgraded from the original, and the Durango was now bigger than the Chevy Tahoe, Ford Expedition, Nissan Armada, or Toyota Sequoia. Putting 48 inches between the wheelhouses allowed for the ever-helpful movement of plywood; yet it had a tighter turning radius than the first generation.

The new Durango was safer than before, with repairable crush areas, the largest brakes in its class, standard antilock brakes, and an optional side curtain airbag system for all rows. The bumper was moved down to car bumper level to avoid killing sedan passengers in a crash.

My review praised the filtering of major bumps and rough concrete roads, despite a relatively firm ride; I liked the surprisingly agile handling and the ever-ready Hemi, which was smooth and comfortable—a luxury-car tune, with enough torque that acceleration was always effortless. It did make a racket when first started up, for less than one minute. 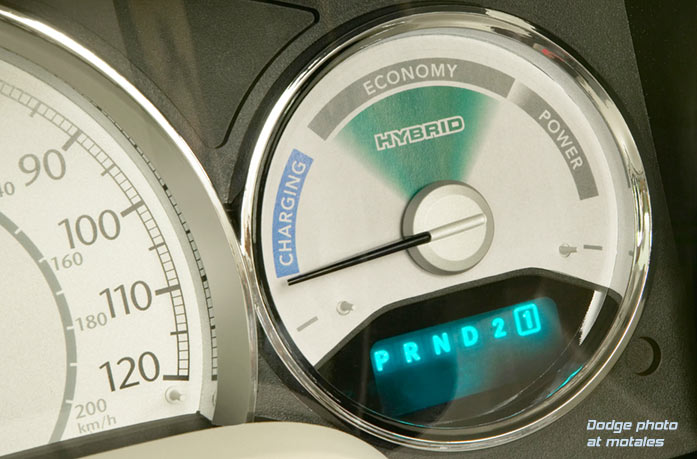 My later (2009) Aspen review called the hybrid smooth and well-engineered. The two oddities were turning on a “ready” light instead of the engine at times, when the key was turned; and, under full throttle, it felt as though it had a two-speed automatic as the power modes changed. Other than that, the engine kicked in and out when needed, without fuss, and the stop-start system reacted instantly. The motors and batteries had no apparent impact on cornering or ride.

The interior was comfortable, with supportive seats in the front and middle rows—and power adjustable pedals with two-driver memory (Limited model). Road and wind noise were reasonably low for the era; heat came quickly on cold days; and the stereo was high fidelity, though the strong bass could not be turned down enough. Visibility was good overall, though because of the height, anything close to the Durango, such as wayward children, would be hidden from the driver. The front wipers had a clever mechanical design that cleared more of the windshield than usual and the de-misters worked unusually well, which helped in daily driving. The instrument panel had snazzy indiglo backlighting and large numbers. The controls were satisfactory, other than the cluster of eight identical button for the climate control and a radio with no physical bass/treble knobs (the touch-screen had a three-band equalizer, instead).

The middle row of seats had a fold-and-tumble feature, and the center seat could be folded down to reveal cupholders and an armrest; each middle seat folded and tumbled separately, and all were height adjustable. Even the back seats were fairly comfortable, though taller passengers might not fit. (The original also had three rows of seats, albeit more tightly squeezed in, with individual flip-and-fold seats in the middle row.)

At the time (in 2003, reviewing an early ’04) I thought the Durango was “a surprisingly strong achievement, overcoming the weaknesses of its predecessor and most of its competitors.”

The end of the Dakota-based Dodge Durango

Some DaimlerChrysler-specific events may have contributed to the fall—notably, DaimlerChrysler passed the company off the Cerberus; some Allpar members wrote that the private equity firm may have been chosen because it was unlikely to lead Chrysler back to success as an independent automaker. In any case, there was much optimism in 2007—and while Aspen likely ate into Durango sales, the total was nearly the same as in 2006. In 2008, it became clear that Cerberus was shopping Chrysler around to potential buyers, and morale of employees and fans crashed. 2008 brought a crashing economy and increasing fuel prices, neither of which helped a relatively expensive, gas-guzzling truck-based SUV.

Chrysler stopped making the Durango and its Aspen sibling on December 19, 2008; the Newark, Delaware factory where they had been made was demolished shortly thereafter. Many people still wanted a Durango, and gasoline prices quickly fell, which brings us to a later story—the Durango “WD,” based on the Jeep Grand Cherokee, still being sold in 2023.