In that December when I saw the 1971 Fury police car on Route 35 in Middletown, NJ, I also saw this Challenger at a body shop about a mile south of the police car.  Since it was parked at a business and I wasn’t buying, I didn’t feel comfortable hanging around too long.  I took these photos and glanced inside so I could share the car with all of you. 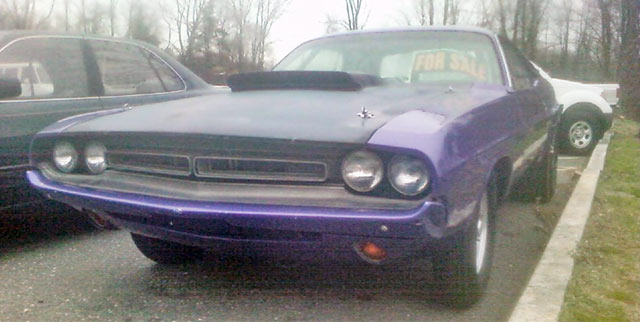 Appearances can be deceiving, especially in a modified car, but to me this is a Dodge Challenger from 1971.  The grill, side marker lights and tail lights are clearly 1971 vintage.  It is painted Plum Crazy, body and bumpers, interestingly enough.  I think it had a vinyl top once upon a time.  The rear spoiler looks like a Mopar piece.  The hood (with hood pins) is an aftermarket piece and probably fiberglass.

The interior says “clapped-out, home-built race car.” All the factory seats were removed, and a lightweight driver’s seat was installed. A four-point roll cage and harness were added for safety.  An aftermarket shifter replaced the factory console. 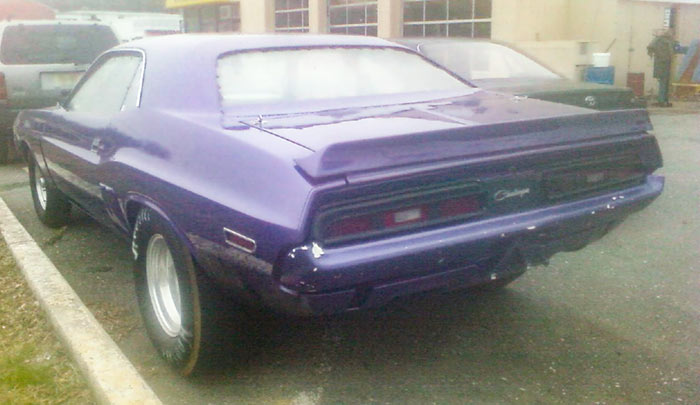 The mag wheels with “skinnies” on the front and Hoosiers on the back say “weekend drag racer.” I don’t think the car had aftermarket wheel tubs but I think the fender lips had been trimmed a little bit.  The rear valence panel looks like one from a dual exhaust car with chrome tip cut-outs.  I don’t know what engine it had, but I’m sure it was a V-8.  I think it had aftermarket headers and a shortened exhaust.