By the late 1980s, it was clear to pretty much any American that domestic automakers were in trouble while the Japanese were rapidly gaining ground. At that point, the main German automaker in U.S. sales was Volkswagen, and they had already started losing ground with the renaming of their most popular car from “Rabbit”  to the globally-correct but far less catchy “Golf.” 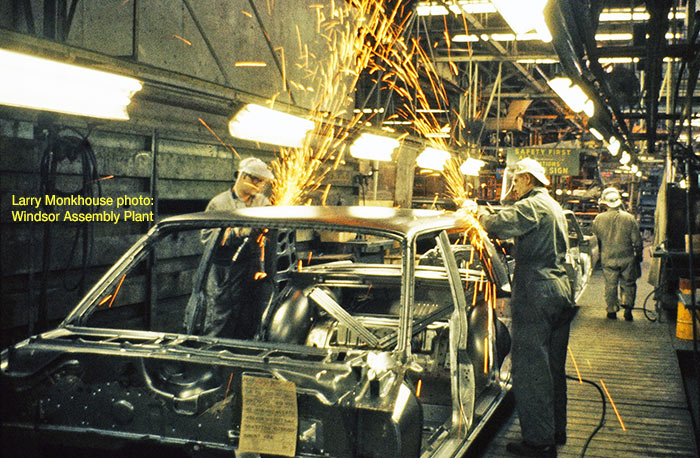 Chrysler executives knew there were problems, and were working on resolving them. Purchasing AMC in 1987 was a major step forward, since, like the Japanese companies, AMC developed cars using cross-functional teams; that system was not yet in place, but would soon produce the Dodge Viper and, perhaps more important, the big LH cars and then the 1994 Dodge Ram 1500, the pickup that changed the industry.

In the midst of the engineering process changes, a group of people met to discuss how to handle plant changeovers. By October 1989, they had researched the Japanese approach and compared it with the American approach—using, among other examples, Toyota’s Kentucky plant in Georgetown. Chrysler had already started talking with Toyota about reviewing the facility itself.

The working group, led by Al Bosley, noted that Japanese companies reduced downtime through a number of methods:

Chrysler, in contrast, replaced models completely every six to ten years, with facelifts in between; successor models were designed without much thought as to existing manufacturing envelopes, so there was little flexbility. In addition, worn and obsolete systems were all changed at once, which meant that changeovers took extra time and capital. Chrysler had made some progress with the use of modular framing, adding the Imperial to Belvidere with only two weeks of downtime, and being able to make one model while changing out another at Warren Truck (which made two different vehicles; one could keep running while the other was replaced).

The company planned to introduce a new, Japanese-style process as brand new vehicles were introduced: with the Grand Cherokee (ZJ) at Jefferson North, with the LH at Brampton/Bramalea, the Neon (PL) at Belvidere, the JA (cloud cars) at Sterling Heights and Newark (DE), and the new minivans (S) at Windsor and St. Louis.

Aside from plant changeovers, Bob Lutz and Tom J. Osborn agreed that the company would look into supplier relationships in the early 1990s; one part of this was relying more on suppliers to engineer components, so they could cut in-house engineering costs on their new small car. This was essential to make a profit in a segment where no American company did—indeed, GM, Ford, and Chrysler all lost thousands of dollars on every Cavalier, Escort, and Shadow they sold. The new small car, the Neon, would actually have thousands in profit per car, even after unexpectedly high warranty costs; but that’s a story for another page.