1990s Chrysler: Company on a Mission

Mission statements are often so vague and fuzzy they could apply to any organization. Over a decade ago, the creator of Dilbert even posted an online mission statement creation tool, which would randomly generate the kind of vague, optimistic language adopted by thousands of real companies—either in the hopes of inspiring workers or to check a box on their business-school forms.

Chrysler, when it was working on cultural change after the 1987 AMC purchase, went further. They were heavily influenced by AMC, which despite its size had recently launched the groundbreaking Cherokee, Comanche, and Premier. Premier bombed, but its basic design ideas led the LH to revolutionize large cars. 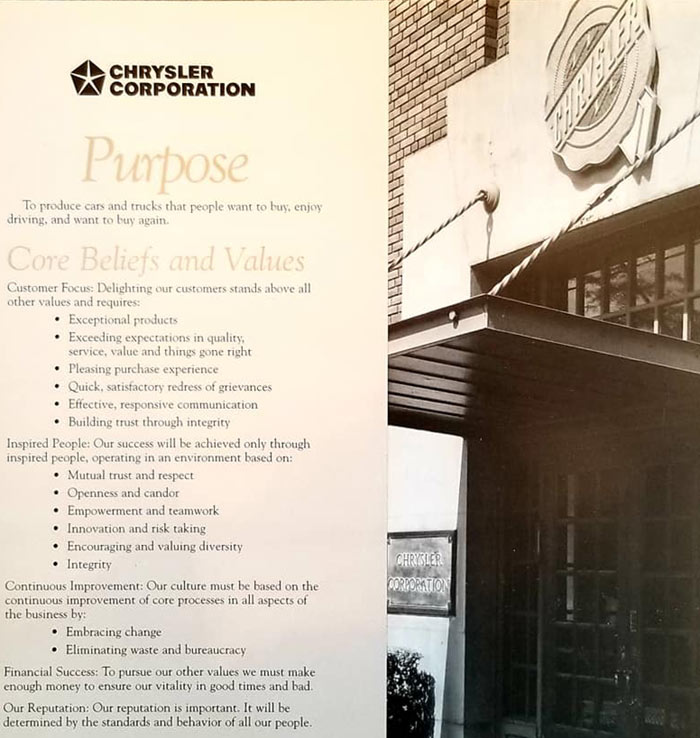 The mission statement they eventually chose was “To produce cars and trucks that people want to buy, enjoy driving, and want to buy again.”  It was plain, simple, and meaningful within each brand’s constraints.

The core values were five-fold, and it’s important to note the order. First was customer focus (“delighting our customers”), which “stands above all other values;” it had six bullet points. Next was “inspired people,” aiming at employees, with six values—some of which were key strengths of AMC and not quite so strong at Chrysler before 1987. Next was continuous improvement, aimed at production, with just two bullets—embracing change and eliminating waste and bureaucracy.

The final core beliefs and values were actually outcomes: financial success and reputation. Together, the five categories could have been used in a balanced scorecard, representing customers, employees, manufacturing and quality, finances, and a sort of sum of innovation, quality, supplier relations, and integrity—reputation.

The mission was taken seriously by Chrysler’s leaders, and so was taken seriously by its employees. The result was a stint of being the most profitable automaker in the world, of having above average customer acquisitions and customer retention, and of winning numerous awards—before a weak chief executive gave the works to Daimler-Benz. But that’s a sad story for another day; this story is the start of a great triumph, one which took the same people and helped them to become far more productive. From endless recycled K-cars, Chrysler Corporation became known for state of the art styling, engineering, and design; its vehicles broke the rules for large cars, then pickup trucks, then small cars, and so on. Chrysler’s innovations of the 1990s would become legion—and part of it was living by this unusually meaningful mission statement. 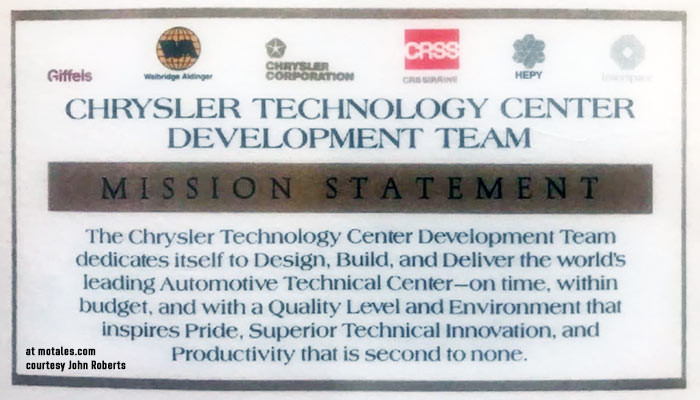 The sign above, photographed by John Roberts, shows that the use of mission statements was not just at the corporate level. The big building—the CTC—was developed by architects and engineers, and this team had its own mission. The CTC set the standard for automotive technical centers around the world, spurring GM (among others), some time later, to work on their own facilities.

Other stories of Chrysler history, processes, and such