In the 1970s, political conflicts suddenly stopped the flow of oil from the Middle East. Europeans were used to small, fuel-efficient cars; but in the United States, fuel economy had been an afterthought since the end of World War II rationing. 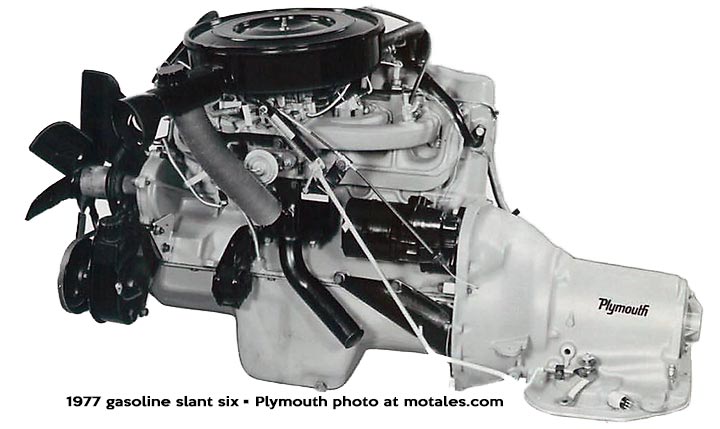 American automakers did what they could, quickly, importing cars from foreign subsidiaries (Cricket) and rebadging Japanese cars (Colt). Chrysler made the slant six a more viable V8 replacement by making a two-barrel variant, which provided responsiveness closer to the 318 V8 with the fuel efficiency of the slant six.

Diesel engines, which had made Volkswagen and Mercedes cars far more popular, were an obvious next step; they were noisier and more expensive than gasoline engines, but they were also far, far more economical. Chrysler imported Mitsubishi diesels while starting research on converting their smallest engine, the slant six.

After the initial fuel crises were over, Chrysler commissioned Ricardo to report on converting their 225-cubic-inch slant six engine to diesel. Tony Lewis found and forwarded their 1980 paper on the project, submitted to the Automobile Division of the Proceedings of the Institution of Mechanical Engineers.

Why Ricardo? They were experts in light-duty diesel engines, consulting with most European manufacturers. Ricardo worked on development and proving tests using the Volare and Aspen as mules. They knew they would need fuel injection for efficiency and glow plugs for starting at temperatures down to –4°F (below that temperature, they would need a “supplemental starting aid”). They assumed a 21.5:1 compression ratio, far, far above the slant six’s norm; but they expected drivability as good as (or better than) the gasoline engine, without the need for frequent tuning.

Ricardo expected the engine to lose 30% of its power, which was normal when converting from gasoline, and was surprised to find it didn’t really lose any power; the fuel injection and higher compression were enough of an improvement over the usual low compression and single-barrel carburetor to make up for the diesel fuel. If they wanted to hit their smoke and 1g/mile nitrogen emissions goals, though, they would lose 10 horsepower and reduce fuel economy by 10%. 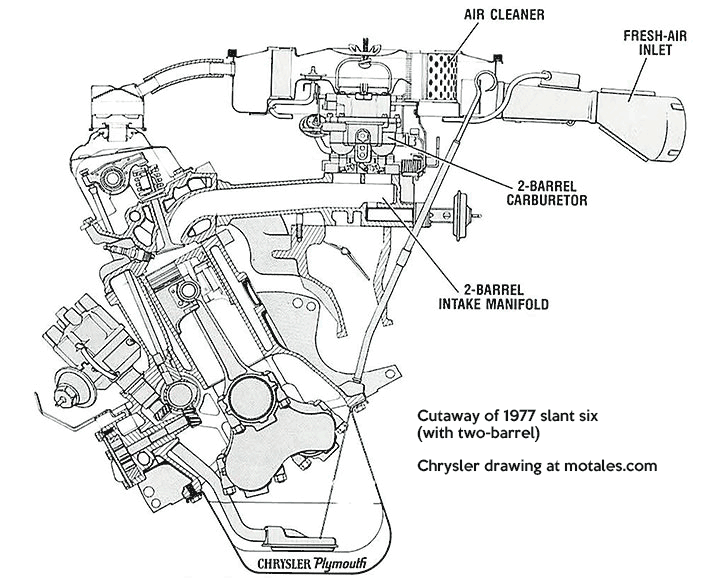 The engine would be noisier than the gasoline version; but if retuned to meet lower emissions standards, it might end up roughly the same as the gasoline engines. The extra noise was unlikely to be a problem.

The block needed few changes: Ricardo added metal between the pushrods to support the gasket below the plug, keeping the four-bolt head fastener system and gasoline-engine manifold layout. Ricardo wanted to completely change the heads, with vertical valves and the company’s Comet chamber design; the Bosch KCA injector would be angled at 30° of vertical, with glow plugs included, and drilled passages between the valve seats for cooling. Chrysler’s pistons were replaced by expansion-controlled versions; and a new cam was fitted.

The fuel injection system used a Roosamaster DB2 mechanical fuel pump driven by a duplex roller chain from the crank, as gears were too noisy and toothed belts would have been too large. The chain would only need adjustment once every 50,000 miles. The exhaust manifold was a single-piece cast iron design, eliminating the gasoline engine’s hot spot. Two intakes were considered, a “log” style and one with a circular plenum which included the air cleaner and long tubes to the ports.

The first prototype had less power and economy than desired, with more smoke, though the engine had lower-than-expected friction; volumetric efficiency went up to 87.% (at around 2,500 rpm), with the circular-plenum intake doing better. Given these results, Ricardo went ahead and worked on combustion and fuel injection tuning.

The first Ricardo chamber had too much bump clearance, so they machined the top deck and recessed the valve seats further, among other changes. While the glow plug worked better when downstream, engineers thought that would result in oil leaks and overheating as fuel hit it, so they kept it in the original place.

There main longevity issue was with the new pistons, which were replaced by Mahle and Schmidt models—both worked well. Durability was satisfactory, but they realized turbocharging would bring problems.

Making these changes and retuning the fuel injection resulted in peak horsepower of over 70 kW and torque of over 220 Nm, with fuel consumption averaging around 275 grams/kwH.  Converting to American units, the engine lost only a few horsepower from its 74.6 kW gasoline rating, with torque dropping by 5% to 162 pound-feet.

Finally, a 1977 Plymouth Volare was tested with both the gasoline and then a diesel slant six; it weighed 3,788 pounds with the diesel. When they chose an optimal axle ratio, they found these performance metrics:

The diesel engine slashed emissions of pollutants, while dramatically increasing fuel economy; the only drawback was a small drop in power. While 0-60 times were a little lower, the engine likely felt more responsive. Top speed would also likely be lower, given the lower redline of the engine, though few drivers go up to 90 mph (especially with a slant six), so this was likely not an issue. Noise was only around 2 decibels louder than the gasoline engine, and starting was successfully tested down to 0°F.

The diesel would warm up more slowly than gasoline engines, so drivers would stay colder longer; one possible solution for that was increasing exhaust back pressure (increasing back pressure by 16 pounds per square inch would raise coolant pressure from 0°C/32°F to 50°C/122°F in 5 minutes, versus 7.5 minutes unassisted; 80°C/176°F would be reached in 12 minutes versus 40 minutes without added back pressure).

The project appears to have ended with this test of a 1977 Plymouth Volare four-door sedan, which likely took place in 1979 or early 1980. Generally, historians blame GM’s awful conversion of their V8 gasoline engine to diesel, but there were other factors. The fuel-economy craze was slowing to a halt, Chrysler was facing capital shortages, the economical Omni and Horizon were incredibly popular, and the K-cars were turning out to be a far more viable solution. One can ask why nobody considered bringing over the economical 215-cubic-inch Aussie “Hemi Six,” but chances are the issues there were cost and emissions.

This was not Chrysler’s only foray into making the slant six into a diesel; a separate project also looked at turbocharging the diesel six, but that’s a story for another day.