Next Generation Engines: The PowerTech 3.7 and 4.7

During the early 1980s, Chrysler focused on new front-drive cars and minivans, while the truck side languished. Then, in the late 1980s, work started on a truly new full-size pickup—but by this time it was clear that their engines were outdated. Chrysler’s V8 blocks had been designed in the late 1940s; their last major revision had been in the 1960s, with a V6 version based on this old block. AMC’s lone V8 did not perform well, and AMC had been buying their V6 engines from GM. 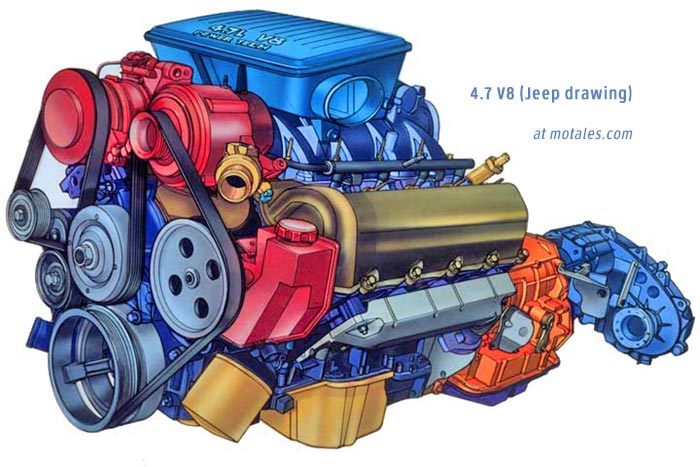 Chrysler started modernizing its truck engines, while putting engineer Bob Lee in charge of creating a modern V6 and V8. Bob Lees had wanted a new engine program for some time, but actually getting one, with no constraints on design, was overwhelming. It took a while to sort through the incredibly wide range of options, which included a three-valve design—then popular in Europe. Four-valve engines, were also considered, but rejected; their power was best at high revs. The team settled on a two-valve design for cost and low-rev torque.

When design was nearly finished and the team was preparing for production, Bob Lees was put in charge of a second completely new engine program—this time, to replace the 5.9 liter V8 and provide a car version as well. The team started work on another brand new design, changing many of their original design choices to create the highly successful Hemi V8. They might have saved some money by expanding the 4.7, but the Hemi was a huge success and a major selling point for both cars and pickups.

The “Next Generation” engines had cast-iron blocks with aluminum heads, using a three-layer composite head gasket to manage differences in the metals’ expansion rates. Valve covers were a magnesium alloy until the second generation V8. Exhaust manifolds had a heat shield of steel-coated aluminum. Both V6 and V8 versions had a 90° V.

Like the 1995 Neon 2.0, the Next Generation used a composite (plastic) intake manifold which was quite light and had better airflow because they could have smoother, more precise surfaces. They also did not transmit much heat to the incoming air.

The rods and caps, following a Neon 2.0 process, were powder-forged and machined in a single piece; the caps were then cracked off and paired with the rods they came from, providing an ideal mating surface. 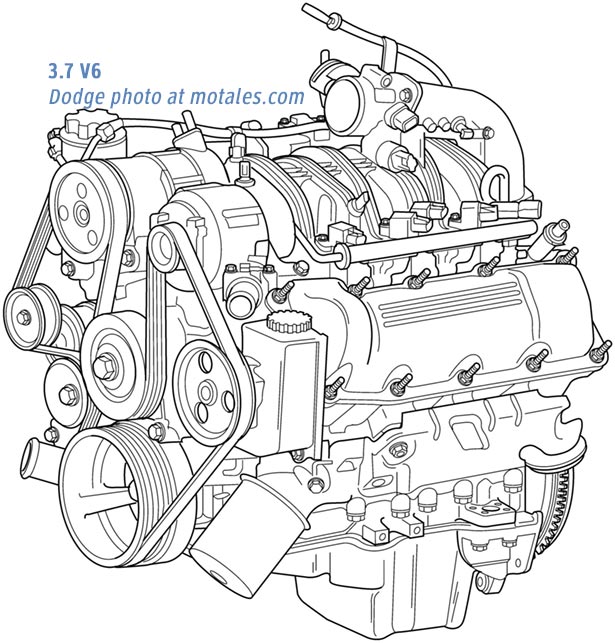 The alternator, power steering pump, and air conditioning compressor were mounted on the front cover of the engine to improve alignment with the serpentine belt, cutting belt wear and noise; belt life was extended to 100,000 miles, partly by using an automatic tensioner. The exhaust had dual miniature catalytic converters, one for each cylinder bank, as well as an underbody converter. Serial numbers were stamped on the right front side of the block.

A compacted graphite iron bedplate replaced traditional main bearings to increase rigidity, cutting noise and vibration. The crank was microfinished nodular cast iron. The single-piece rear main seal was similar to that of the 2.2 four cylinder. The rod journals had rolled fillets to prevent cracking. A dampener reduced torsional vibrations.

Valves were heat-resistant steel with chrome-plated stems, actuated by roller rocker arms which pivoted on lash adjusters; each valve used three beadlock keepers to retain the springs while allowing valve rotation. There was one chain-driven overhead cam for each cylinder bank, with automatic tensioner arms, sharing an idler pulley.

The engine had sequential multiple-port fuel injection—each injector fired only when their valve was open. Fuel rails fed head-mounted injectors; fuel delivery was returnless (still a new technology), with the fuel pump and regulator kept in the gas tank and any transient changes in fuel pressure at the injector managed by the computer.

Coil-on-plug ignition avoided traditional plug wires. A “throttle by wire” system had the computer controlling the throttle, rather than using a direct link between the gas pedal and the throttle, partly to have a more sophisticated traction and stability control.

The engine was designed to run 150,000 before any repairs, under normal conditions. The serpentine belt tensioner was designed for a 100,000 mile belt life.

Coded “Corsair,” after the planes, the 4.7 liter V8 (287 cubic inches) launched in 1999 Jeeps, then the 2000 Dodge Dakota pickups, and finally the 2002 Ram 1500 pickups. This first version did not have knock sensors or exhaust gas recirculation. Intake runners were 20 inches long and tuned for power in low-to-mid revs.

The new 4.7 had completely new dimensions, differing in just about every way from the LA engines. Bore spacing was just 4.09 inches, down from the LA series’ 4.46” spacing, since there was no plan to bore it out further. The bore was 3.66”, a size which helped with emissions; that was between the long-gone 273 and current 318 V8s. The stroke was 3.405”, between the 5.2 and 5.9 liter V8s. The bores were extremely precise in their roundness and taper compared to normal V8 engines. Compression was 9.0:1, so the engine could take regular fuel (87 octane). 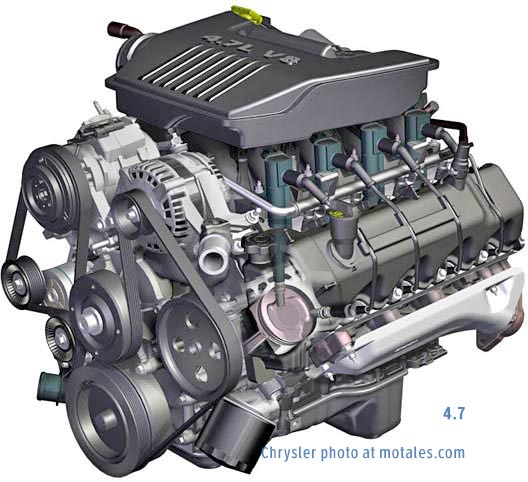 The deck height was 9.09”, around half an inch lower than the older V8s.

Lubrication was similar to that of AMC V8 engines, with a crank-driven gerotor oil pump mounted in the timing cover and a windage tray in the oil pan. Through the 2007s, they recommended 5W30 oil; after that, 5W20 (check your owner’s manual to be sure). The cooling system was an industry first, using in-line engine-driven and electrical fans, so the engine fan could idle at a low speed (250-300 rpm vs the usual 650-700 rpm), with the electric fan kicking in as needed. The hybrid cooling system saved up to 6 hp. 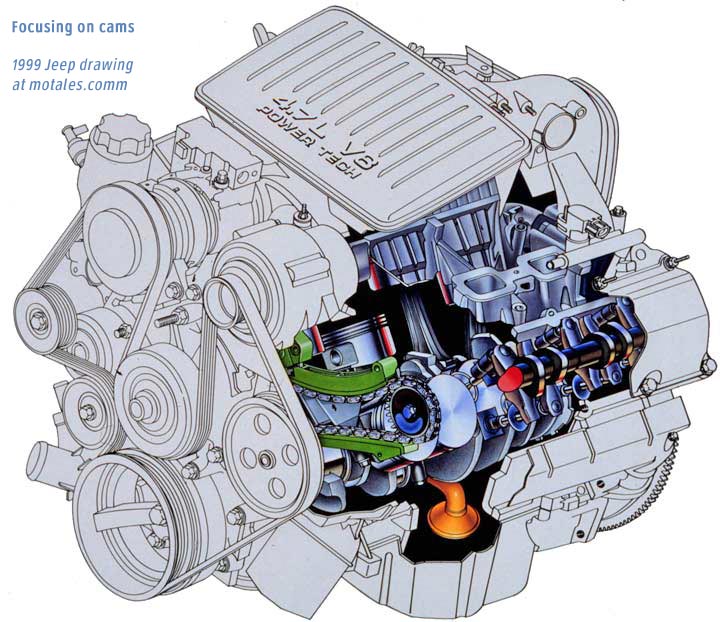 The heads had large, 13°-splayed intake valves (1.89”) and 1.46” exhaust valves. They were close to being hemispherical; that shape was efficienct and allowed for larger valves for power. The spark plug was near the center, but slightly off to one side.

The 4.7 had slightly more power than the 318 (5.2) V8 it replaced, but was 54 pounds lighter, produced 30% less pollution, and made less noise, with less vibration, according to Chrysler. The company claimed that the 4.7 had more pulling power, faster initial acceleration, and three miles per gallon better economy.

The engine first arrived in the 1999 Jeep Grand Cherokee, joining the 2000 Dodge Dakota and Durango and, finally, the 2002 Ram 1500. It never did go into the B-Vans, the Dodge Van and Sportsman Wagon, which ended their days with the 5.2 V8.

Almost immediately, product managers asked for an upgrade, and work started on the High Output 4.7, released in the 2002 Jeep Grand Cherokee. This version using domed pistons to raise the compression from 9.0:1 to 9.7:1, but required premium (93 octane) fuel. In the Grand Cherokee, the High Output version raised the 4.7 from 235 to 265 hp, and from 295 to 330 lb-ft of torque, a substantial boost. 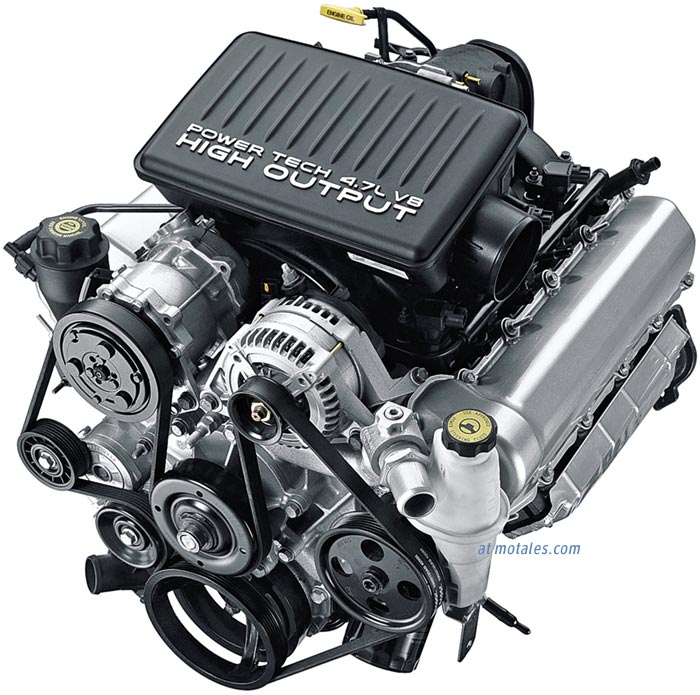 E85 “flex fuel” versions started out in the 2004 models for fleet buyers, and with the 2007 trucks for retail buyers.

The Hemi 5.7, made by the same team, had been out for a while; some of the overperforming V8’s features were moved to the 4.7s for the 2008 model year. The new 4.7 used two spark plugs per cylinder and slant/squish heads, allowing for 9.8:1 compression on regular gas; the High Output version was dropped as a result. Better port flow and reworked induction brought more air into the engine, while lighter pistons and rods dropped reciprocating mass. The engineers also reduced the accessory drive speed to cut parasitic losses, and smoothed the idle with a normally-open valve lash adjuster system.

The 4.7 was a competitive engine, but having two engine lines with similar economy didn’t make much sense once the Liberty, which couldn’t fit the 5.7 Hemi, was dropped. Chrysler ended 4.7 production in July 2013, moving the related 3.7 liter V6 to the Trenton, Michigan factory. From here on, Chrysler V8s would all be Hemis.

The 3.7 V6, engineered alongside the 4.7 V8 and sharng most of its features, was launched in the 2001 Jeep Liberty, quickly replacing the old 3.9 V6 in the 2002 Dodge Ram. In both vehicles, it was coupled to both manual and automatic transmissions. The 3.7 displaced 226 cubic inches, almost the same as the legendary slant six—but it produced far more power.

Because it was V8 based, the 3.7 had a 90° V (like the 3.9), which gave it natural vibrations. To deal with this, the engineers included a counter-rotating balance shaft and, to stabilize cylinder firing times, a split-pin crankshaft. Like the 4.7, it had a tubular cam, two valves per cylinder, sintered rods and caps, and a composite intake with tuned runners (shorter than the V8’s for torque and power peaks at higher speeds). Compression was 9.1:1. 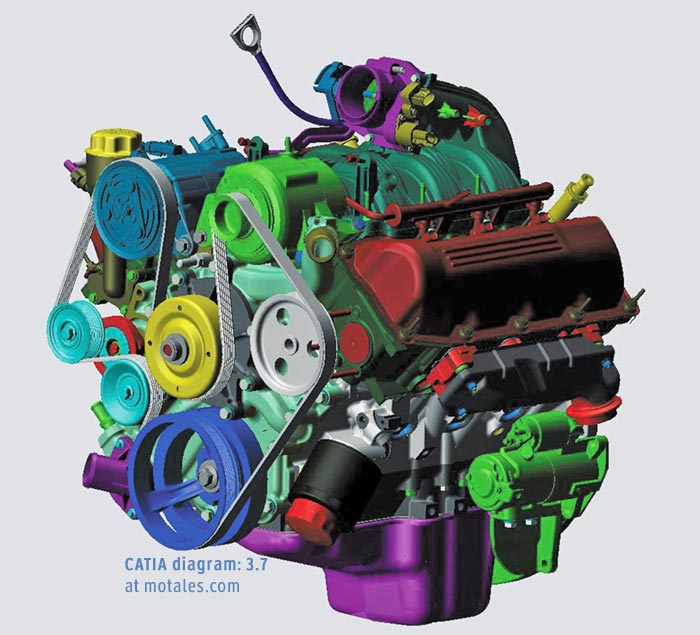 Airflow was optimized with hundreds of hours of computer simulations. The splayed valves provided large intake ports in the fast-burn heads. Spark plugs were near the center of the chamber to increase valve size. As for spark plugs, Allpar quoted Marc Rozman as writing:

I did the spark plug testing for Champion [during] calibration work for the 3.7 with engineer Brian Crothers, a sharp guy. We installed their instrumented plugs in different heat ranges to determine the ones to use for production. They thanked us for building an engine that fit their most common spark plug. ... We had Kistler probed cylinder heads, thermocoupled components, and exhaust gas analyzers.

In the 2001 Jeep Liberty, the 3.7 liter V6 engine produced 210 hp and 235 lb-ft, far above the 3.9 it replaced (175 hp, 225 lb-ft); but it was more carlike in its power curve, requiring more revving to get to peak power. Some preferred the older engines for their greater initial torque, but the newer ones were more economical, smoother, and quieter—and had more potential for improvement.

The 2005 Ram 1500’s V6 was upgraded with a revised cam profile, new lash adjusters, new rings, and a reported but possibly incorrect 9.7:1 compression ratio (reported as 9.6:1 in the service manual); output was unchanged. The engine still ran on regular fuel.

Compression was reported as being 9.1:1 in press releases until the 2005 Ram 1500, which chnaged to 9.7:1—but the fuel requirement and power output were unchanged. The Dodge Dakota showed the same compression as the Ram 1500. The Jeep Liberty continued to show 9.1:1 compression and the usual 5 hp less than the Dakota and Ram 3.7s into 2007—after which, with the same power ratings, it showed 9.7:1 compression.

By now, Chrysler was now working on a new V6 to replace their existing panoply. The Phoenix engine project (whose name was changed for trademark reasons just before release) was begun under Daimler, nearly dropped by Cerberus, and finished under Fiat. The new “Pentastar” V6 started out on the 2011 large cars, and replaced the 3.7 on the 2012 Jeep Cherokee (the optional V8 was not the 4.7 but the “Hemi” 5.7). At that point, and through its final days in 2013, the 3.7 “Next Generation” V6 still had the same power ratings as in its first days.

* This engine was used in minivans, and was not related to the AMC 4.0 straight-six.

A good deal of the information on the original 4.7 V8 comes courtesy of Rick Ehrenberg, Mopar Action.