The first Dodge Dakota midsize pickup truck, slotted between the Mitsubishi D50 and the Dodge D-100, was too small for a V8 (or so its designers thought); but product planners felt that a V6, at least, was needed as an option. Engine designers, led by Willem Weertman, obliged by knocking two cylinders off their LA-family 318 (5.2 liter) V8 and the 3.9 was born, incidentally sounding the death knell of the “slant six.” 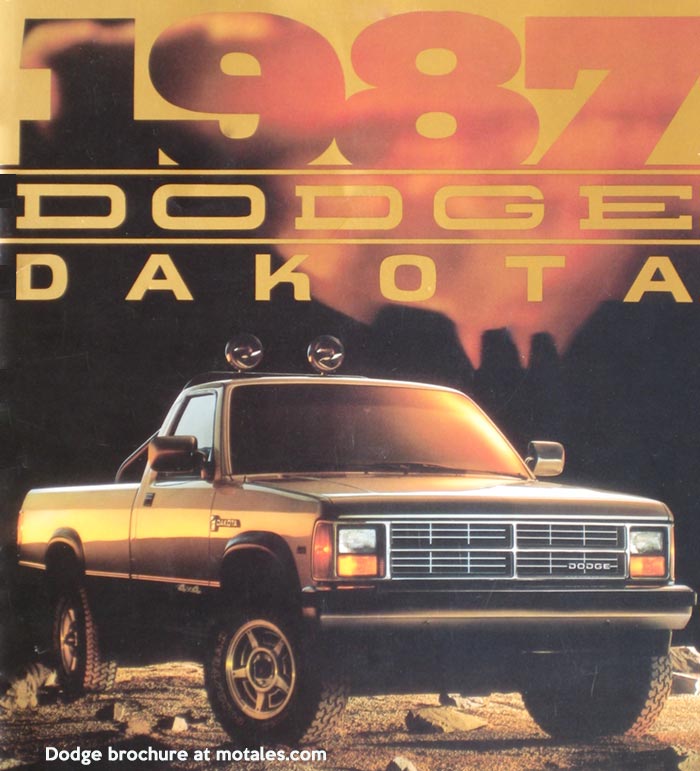 Weertman said that using the LA-family V8 as a basis for the V6 did not just speed development—it meant they could build the new V6 in the same engine plant, sharing a good deal of equipment with the V8s. For the same reason, they kept the bore and stroke of the 318 V8 (3.91” x 3.31”). The corporation did not have the money for a new factory—or even a new engine line. The irony of the situation was making a brand new engine based on one whose first ancestor had been used in the 1951 Chrysler—and which had its last major block redesign done for the 1967 cars and trucks.

Because the Mound Road plant which made LA engines was automated but not flexible, the V6 block was cast with a “false front,” making it as long as the V8 block. When it got to a certain point on the line, the false front was cut off and the rest was finished on new tooling. The block was actually slightly longer than the in-line four-cylinder—by half an inch (16.94 inches vs the 2.2’s 16.46 inches). Like the 5.2 V8, it had two valves per cylinder, a cast iron block, and cast iron heads. 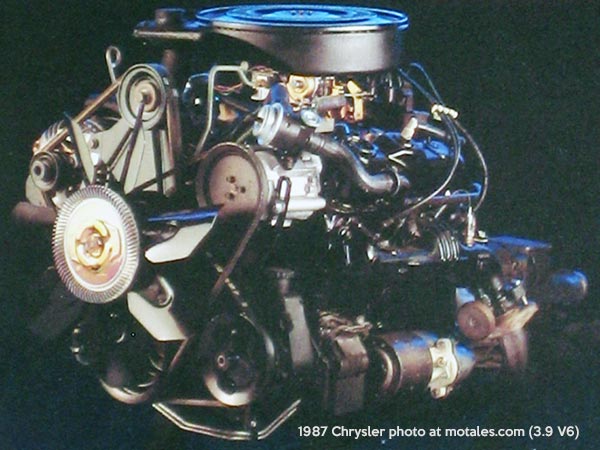 The downside of using a V8 for the basis of the V6 was the 90° angle of the V; a V6 typically uses a 60° angle for even firing. One way they got around that was by splitting the crank pins, which avoided firing intervals of 90° and 150°; the split pins brought intervals of 112° and 128° (making the intervals 120° would have weakened the crank). Head of engine tuning Pete Hagenbuch wrote:

[With] the manuals [they] were awful, especially if you lugged them. It set off all kinds of sympathetic vibrations, just an awful way to build an engine. Chrysler had principles; we didn’t build engines that way. Years later we had already admitted that automatic Tempests and F85s were acceptable as long as you didn’t watch them idle under the hood, where they were just thrashing around. With the vibration absorption you get in a torque converter they were okay for driving. ... Given the 90 degree bank angle the engine cannot have an even firing order. The firing order can be improved by offsetting the rod journals on each crank throw but it’s a Mickey Mouse way to do things! 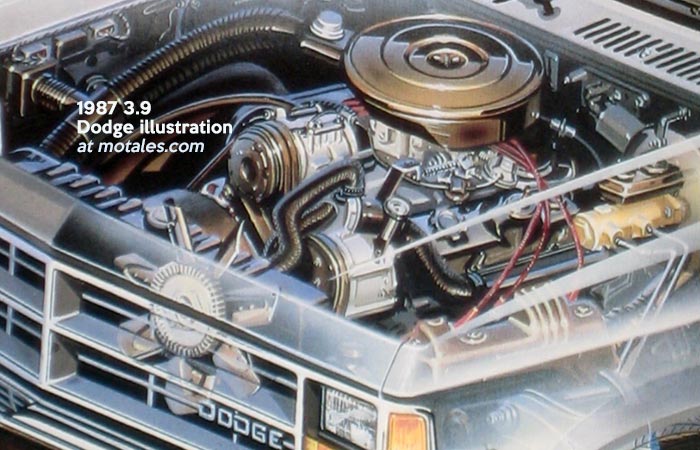 One downside of the design was having a freeze plug at the back of the engine, against the firewall.

The first year of the 3.9 (239 cid) had a carburetor (two-barrel), arriving too early for Chrysler’s upcoming fuel injection system. It was, though, fitted with an aluminum intake; an exhaust gas crossover, surrounded by coolant passages, hastened warm-up. Compression was 9.2:1, with a 240-240-10 cam. Output was rated at 125 hp and 195 lb-ft, well above that of the 3.7 liter (225 cid) slant six’s 95 hp and 170 lb-ft. It was a fairly hefty power boost, and that was not lost on Dodge Truck product planners.

Note: Two versions of the LA 5.9 V8 were available; the higher-power version was used in heavy duty trucks. All listed engines other than the AMC 360, used only in the Jeep Grand Wagoneer, had electronic fuel injection.

In its first (carbureted) year, the 3.9 was exclusive to the 1987 Dodge Dakota; it was optional with rear wheel drive and standard with four wheel drive, coupled to a five-speed manual transmission with an optional automatic. 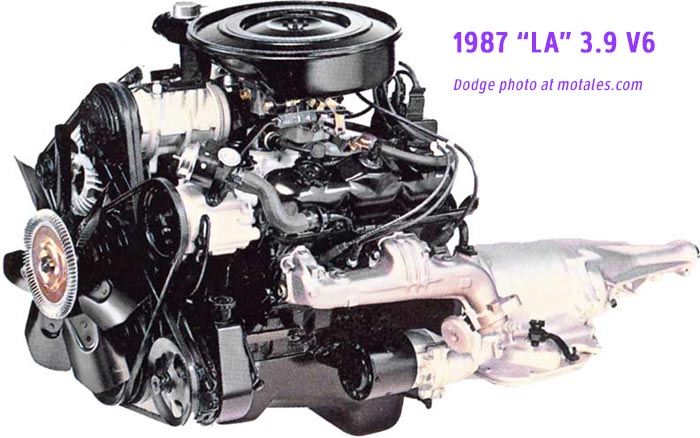 The very next year, the new LA-family V6 replaced the slant six in the 1988 Dodge D-series pickups and vans, as well as being the Dakota power option. For the 1988 trucks (including the Dakota and vans), the 3.9 had a low-pressure throttle body fuel injection system, similar to that of the 318 V8 (released the same year), with dual fuel injectors—one for each cylinder bank. Published ratings remained the same—125 hp and 195 lb-ft of torque—though it’s likely that actual output increased; regardless, stalling became a thing of the past and maintenance was far easier. According to the current EPA site, fuel economy rose substantially—from 17 mpg city to 18 city, and from 22 mpg highway to 24 highway (Dakota RWD, manual transmission). 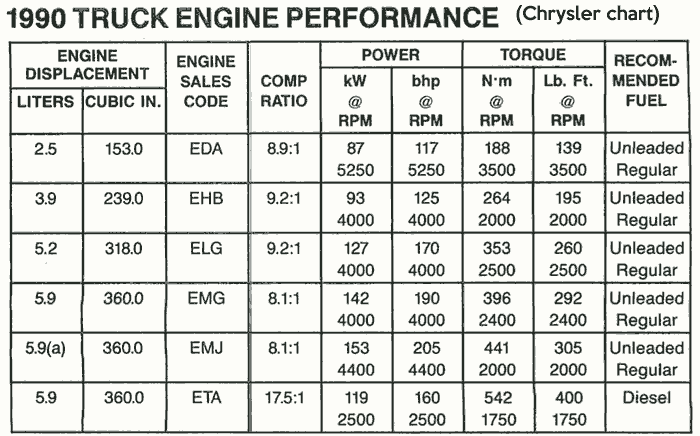 For the 1992 trucks, engineers applied a high-pressure, sequential multiple point fuel injection system, similar to the one in the 5.2 and 5.9 Magnum V8s. They also changed the ignition system, the head design, intake and exhaust manifolds, valves (with greater lift), lubrication, and rocker arms. 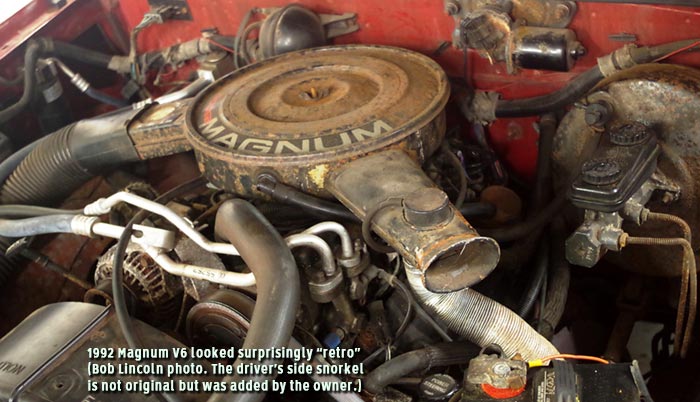 The 1994 trucks saw a new cam which broadened the torque curve, increasing power below 3,200 rpm, for better launches and in-gear feel; it also reduced valvetrain noise. Horsepower was still rated at 175@4800, and torque still peaked at 225@3,200—except in the Ram pickup, where torque was now rated at 230 lb-ft (at 3,200 rpm). New air cleaners, throttle bodies, and throttle cable cams also joined the 1994 trucks; the latter smoothed the transition from idle, essentially using the cam to reduce throttle travel at low throttle, and to increase it at high throttle.

Numerous other changes were made for the 1994 pickups, the first truly new Dodge pickup in decades. These included a new oil pan (to fit the new truck) and a new air cleaner with 75% more capacity than the prior model. The Ram pickups switched to a returnless fuel injection system, where the fuel regulator stayed in the gas tank, and any transient drops in fuel pressure were dealt with by the computer (changing the pulse width). The exhaust pipes from the engine to the catalytic converter were dropped from 2.25 to 2 inches to prevent heat loss, and the converter itself was moved closer to the engine—about 12 inches away from it.

The next major change was dropping EGR on the 1996 Ram 1500. For 1997, minor tuning changes increased responsiveness, not changing any of the published numbers.

These would pretty much be the last changes to the 3.9 liter V6 engines, which coasted on essentially unchanged. However, the hastily-created engine had a challenger in the works: the 3.7 liter “Next Generation” V6. While it was co-developed with a V8 (the 4.7), it had a more conventional 60° V for smoother idling. It also weighed much less than the LA V6, given its aluminum block and heads, and cost less to build. 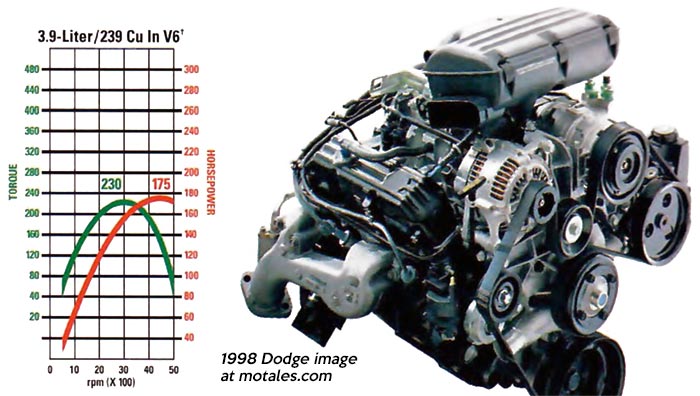 The 3.9 lived on in the 2003 Ram Van and Dodge Dakota; but that was its final year. The big “B-vans” were dropped and their factory demolished, in favor of the Mercedes Sprinter. The Dodge Dakota continued, but the 2004 Dakota gained the 210-hp V6 already used in the Ram 1500; it joined the 4.7 liter V8 already in the Dakota.

The 3.9 had done an admirable job of powering the Dodge Dakota; it had exceeded its original writ by becoming the base power of the Ram Van and Dodge D-150 and Dodge Ram 1500 as well. From the start, it provided a bit more horsepower and a lot more torque than the Dakota’s four-cylinder engines, and a lot more horsepower and some more torque than the slant six. Even at the end, the 3.9 ran a bit roughly, because of the 90° V-angle. It was torque-biased engine, which was desirable in trucks but not so much in sedans, which is one reason why it stayed a truck-ony engine.

At long last, though, in the 2004 trucks, the “temporary fix” LA-family was replaced (by a brand new 3.7), after a surprisingly long and honorable career.