Most writers close the muscle car era in 1974, with the loss of the high-performance big-block engines—never mind the high-performance small-blocks, which could sometimes outrace their bigger counterparts. 1974, though, is a fair pick: with soaring gasoline prices and shortages, people were not thinking about muscle so much as mpg.

The Valiant Brougham drew in many former big-Chrysler, big-Dodge, and big-Plymouth owners, thanks to its high trim—the interior was almost as dressy as that of the Fury. It was not unusual for a Chrysler Newport owner to downsize into the Valiant, and the Brougham’s big-car-like trim helped ease the pain of its smaller size and not-big-car ride.

What of the police, in all this? Plymouth had garnered a huge share of the police market by making ready-made cars with heavy-duty equipment, carefully developed by engineers working with officers across the country. The result was extra-tough cars that could handle and stop well, with premium engines chosen for a mix of performance, low maintenance, and thrift.

Plymouth fielded three 1976 sedans with the police package: the small A-body Valiant, the midsize B-body Fury, and the large C-body Gran Fury. In the past, police had generally insisted on the larger cars, the Gran Fury size, but the midsize Fury (and its Dodge twin) quickly became the most popular police car in America—and why not? The interior of the Fury was more than big enough, while its speed, handling, and maneuverability were better than the four-inch-longer, 2-inch-wider Gran Fury.

The Valiant should have been the cornering king of the three (and indeed the later M-body Diplomat/Gran Fury were about the same size as the Valiant), with nineteen inches less length but only 7.5 inches less wheelbase; the wheels were closer to the corners of the car, though there was still an immense amount of overhang.

All the Mopar squads came with 65-amp or 100-amp alternators, quite strong at a time when a typical car had a 30-40 amp alternator. On every car but the Valiant, disc brakes were standard (manual discs, too, except with the 360, 400, and 440 engines). The Volare is listed as being available, but doesn't seem to have had a police package—or perhaps it was just not ready yet when our fact sheet was prepared.

Engines ranged from the slant six (except on the Gran Fury)  to the E86 440 high-performance edition with twin exhausts and catalytic converters. The police were advised to get the 360 four-barrel, 400 four-barrel, or 440 four-barrel; and with the police package, these included an engine oil cooler. The 360 four-barrel was sold on the Valiant Pursuit, the largest engine the Valiant could have; it would later also be used on Volare Pursuits and then on Diplomat/Gran Fury cars. (Precious few Valiant police cars were sold; indeed, few 1976 Valiants were made.) 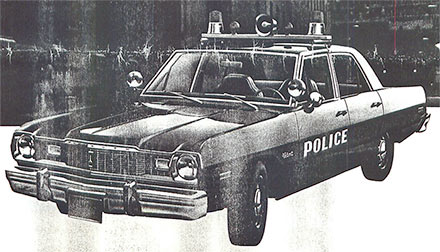 There was a special handling package for the small-block V8s that included special sway bars, torsion bars, rear leaf springs, control arms and pivots, and shock absorbers. Even the 225 slant six had a heavy duty suspension, using heavy duty torsion bars, rear leaf springs, front sway bars, and shock absorbers. Special firm-feel police chucks, to be in high demand at junkyards and dealer parts stores, were used with the V8s when they had power steering, which one would imagine would be nearly always. The police bias-ply tires were good up to 100 mph; above that, the company warned that buyers absolutely need certified high-speed radial tires with fabric belts, standard on all their V8 sedans with police packages, and optional on the wagons and slant sixes. The rear sway bar was left out of the wagons and six-cylinder Valiants.

Heavy-duty vinyl seat covers with heavy-duty springs were also part of the package; personal experience revealed the vinyl to be almost invincible over 150,000 miles, while the extra-firm seat springs made sitting on the front seats like sitting on a park bench, with about the same amount of support around fast turns. 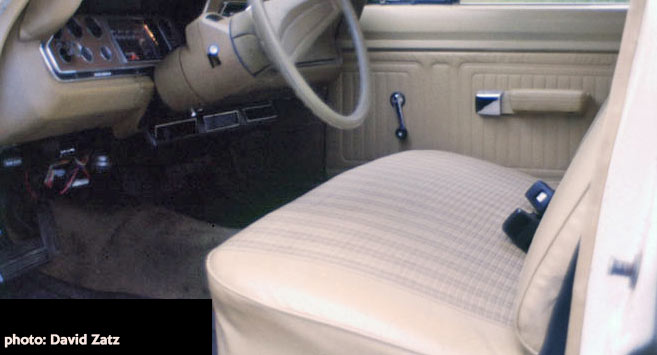 The police packages included numerous additional welds, making for a stiffer, longer-lasting body; the handling of the police cars was greatly improved by this alone, the heavier-duty suspension parts and brakes pitching in to make them more than a match for pretty much any evildoer on the road, even with a less powerful engine than crooks might have. Heavy duty and special handling packages were standard on the police packages—except in the Chrysler Newport wagon.

The real performance engines started with the four-barrel 360, at 220 horsepower and 280 pound-feet of torque—not quite up to today’s Pentastar V6; this was the top Valiant engine, only available on the Valiant.

California numbers were lower, across the board—around 5 to 10 horsepower was bled off with extra emissions equipment, at that time still rather crude (internal engineers, including the head of engine tuning, were already asking for fuel injection to solve these woes and all the drivability issues of the day). Torque was down as well, by about the same amount. Most of the engines were available in California; they also had a single-exhaust 360 four-barrel, with the same power and torque ratings (175/270). No two-barrel 360 or 400 was available in California.

It was an interesting time for police cars; the Volare would soon have its own police package, a fairly rare item (used by, among others, military police and the movie Strange Brew) which was likely a good fit for many departments. Within a few years, the Dodge Diplomat and Plymouth Gran Fury, based off the Volare, would start dominating police cars—which they continued to do until their final year, 1989. Police cars may have been downsizing, but Plymouth was on top of the trends, and Mopar engineers were making every car that fit the bill, fit for law enforcement.

More on the police Valiants at Valiant.Org

122 stories. Mopar is a trademark of Stellantis. We are not associated with FCA US or Stellantis, the owner of trademarks including Dodge, Jeep, Chrysler, Ram, and Mopar.