Trenton Engine started out life in 1951 to make V8s, and continued to pump out those engines through 1978; but by then it was also making four-cylinders. Today, Trenton is mainly known as the home of V6 engines; the plant has both assembled them and made the parts for them. 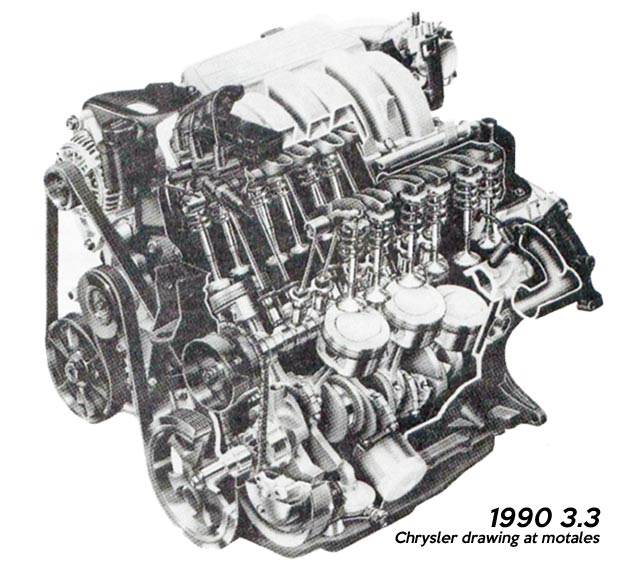 When they started making the 3.3 and 3.8, they had different size rod bearing journals — and a number of them were broken when they changed over incorrectly, so they made the same size bearing and rods after that, adjusting piston size instead.

In 1999, just before these photos were taken, Trenton was just about at its capacity; one former employee later reflected, “I don't think there was any floor space left in the 2.1 million square foot building to add anything else. At that time they were making the 3.2L and 3.5L aluminum block V6 engines, the 3.3L and 3.8L V6 engines for the minivans, and the 1.8L (for export) and 2.0L Neon motors. They made all of the pistons, connecting rods, crankshafts, camshafts, blocks, cylinder heads, intake manifolds, exhaust manifolds and water pumps for each of these motors plus some parts for the 318 and the 3.9L V6 that were assembled at Mound Road engine plant.” (From Allpar.)

Daimler had taken over in 1998, and by 2000, they were outsourcing many parts to save money; and the 3.5 was switched to Kenosha. That at least made room for the new asembly lines shown here, taken in mid-2000.

by Dave Van BurenIf I remember correctly, Department 838 was an low-volume engine assembly line that was to make the aluminum 3.5L V-6 for minivans, stuck in south from the tool room; it sat where they used to make exhaust manifolds, for V8s on one side and for slant sixes on the other. Corporate walked in about a week before it was to start regular production and shut it down. The reason we heard was that transmissions could not take the higher output of the 3.5 over the long term [though David Zatz was told that it was because Marketing believed customers would be confused by a smaller engine making more power.] 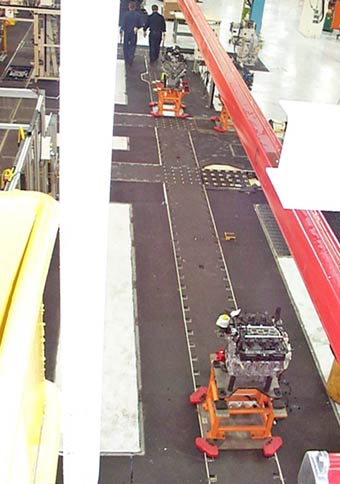 After they shut 838 down, we “borrowed” quite a few things from the machinery, since that line used quite a few of the same things as Department 538 (regular 3.2/3.5L assembly line) did—such as motors, gear boxes, and electrical supplies. We called ourselves “Midnight Auto Supply” and switched the good stuff for our bad stuff.

I had great difficult keeping a straight face when the contractors came in to pull out the line, which was being sent down to our Mexican assembly plant in Saltillo. We saved our plant quite a bit of money—and never heard anything back from Saltillo about it. 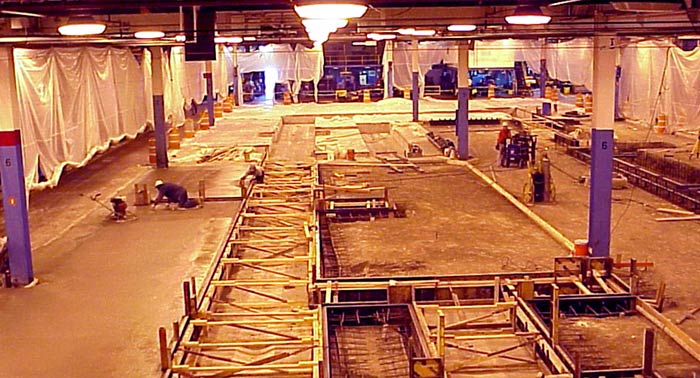 The main plant had low ceilings originally; this area had a five or six foot higher ceiling, making it easier to fit the trucks. The west patio sat where the old shipping dock and water tower had been. 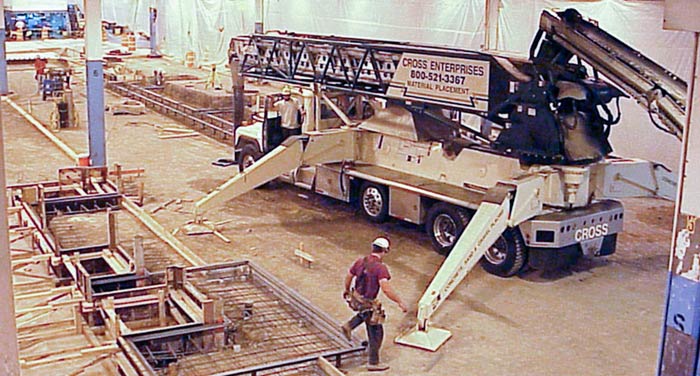 The cement was quite expensive—there was an awful lot poured. In the North plant, when the line wasn't needed, they put gravel and dirt into the trenches so they could use the area for storage. 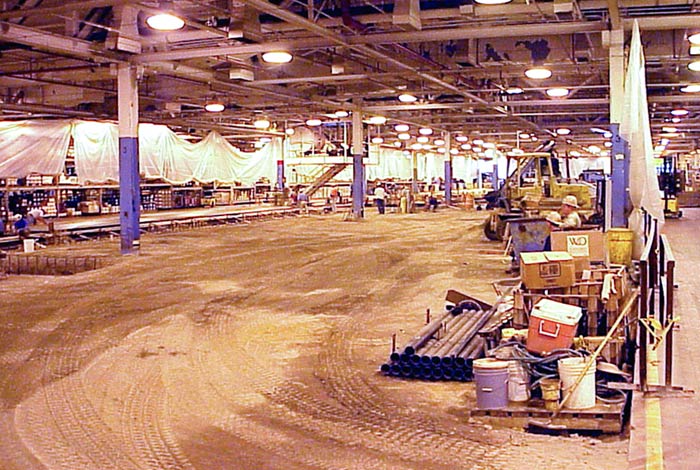 The square gaps are for the machines. 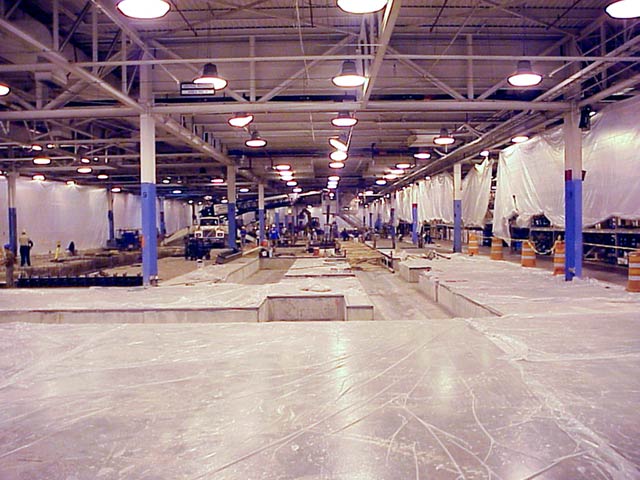 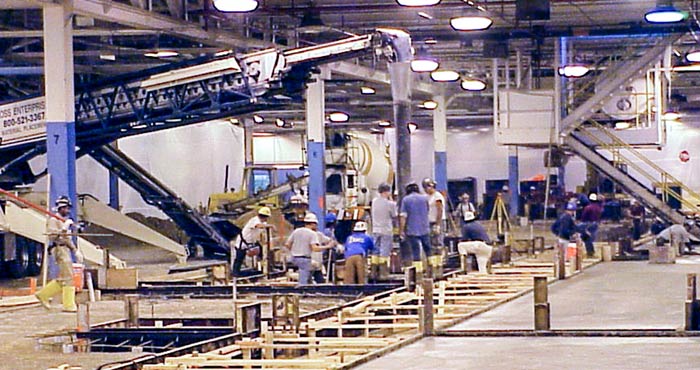 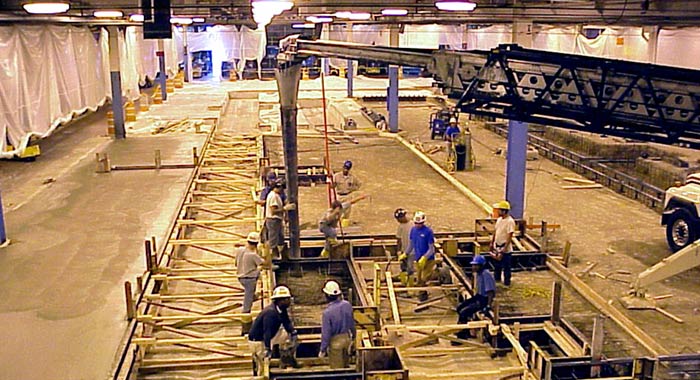 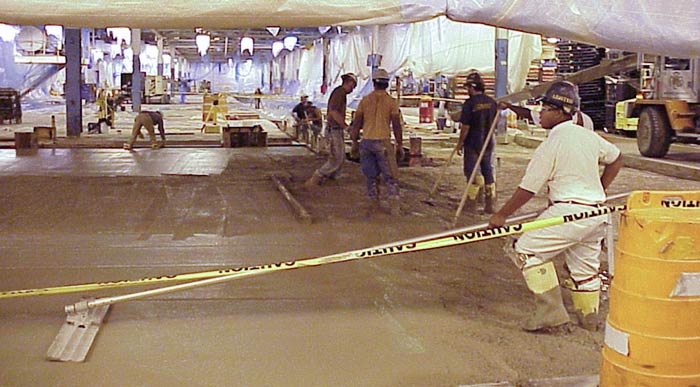 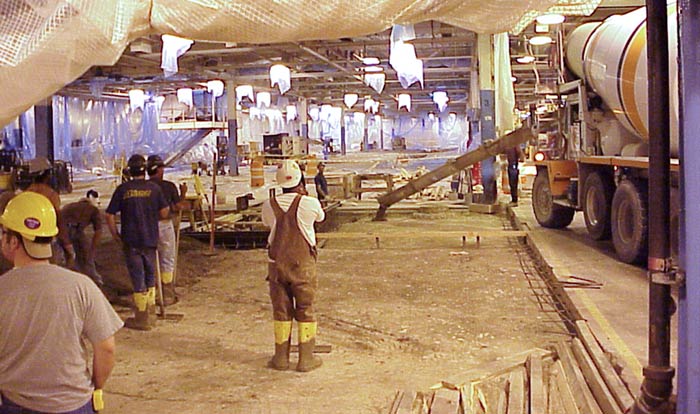 The man with the hat on backwards (above), watching the process, was a pipefitter. 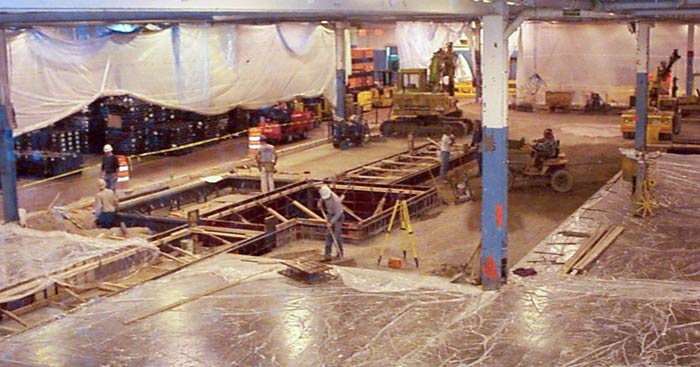 The trenches were also used for oil, and some ran slightly downhill to channel the oil that came off the machines.

The area with the white lights, between the two red lights, is where the 3.2 liter assembly line sits in 2022. 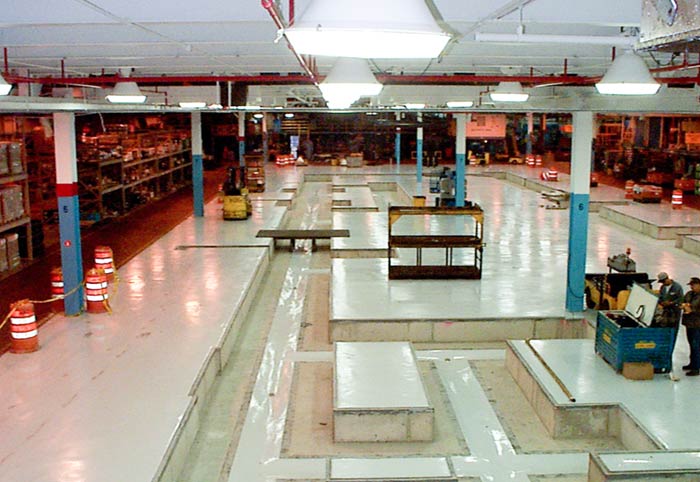 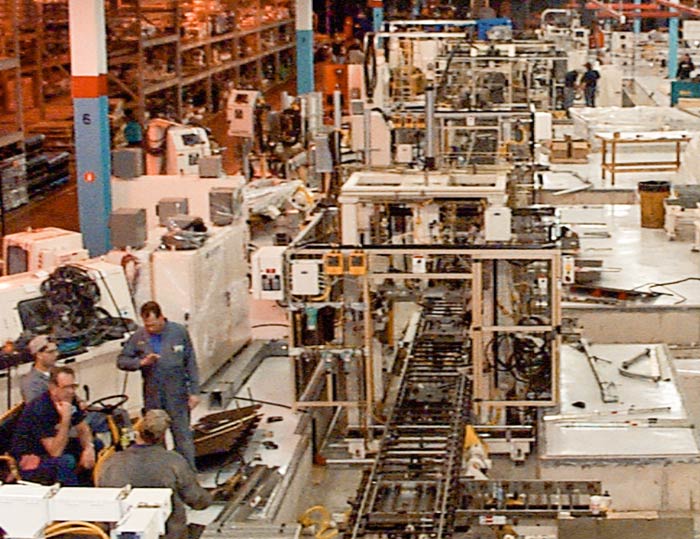 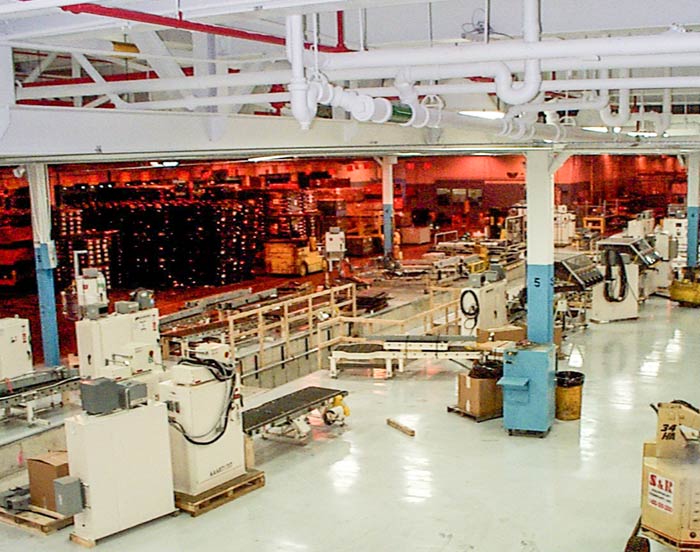 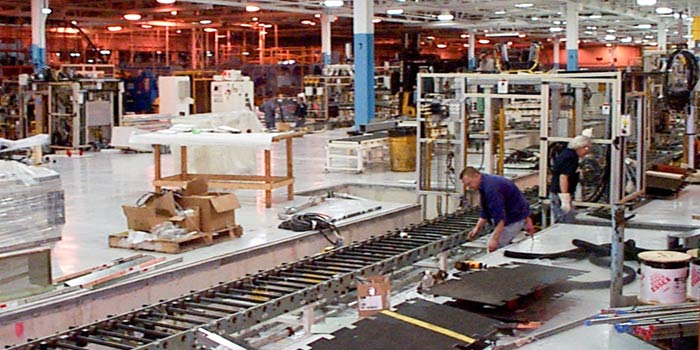 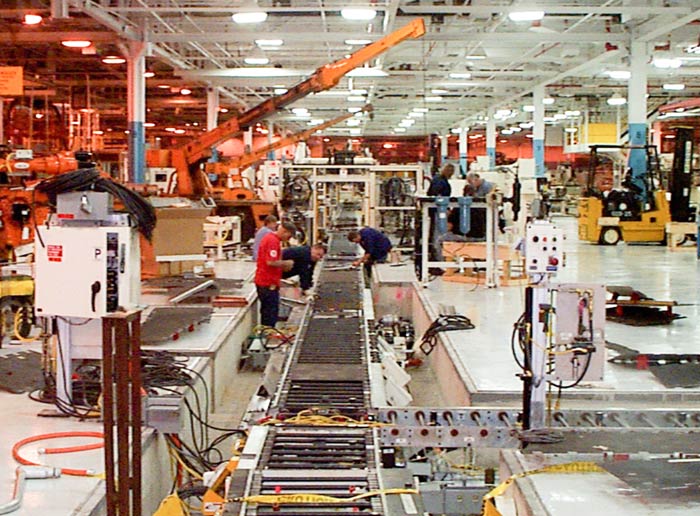 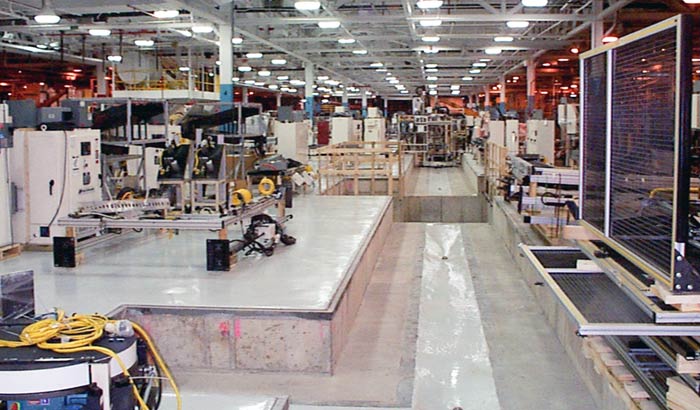 You can see the depth of the trenches; that made it easy to get inside the opaque plastic wrap of the equipment when it was being hidden by the wrap. 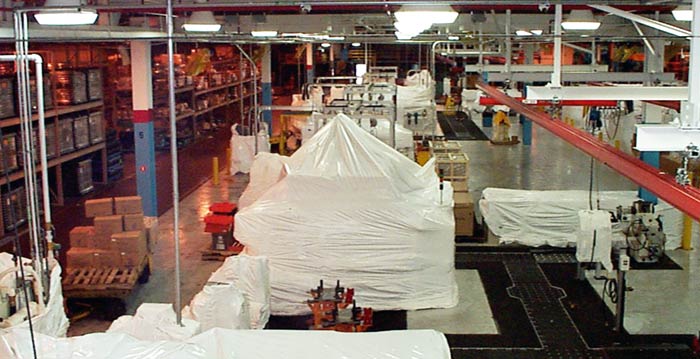 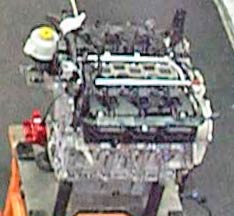 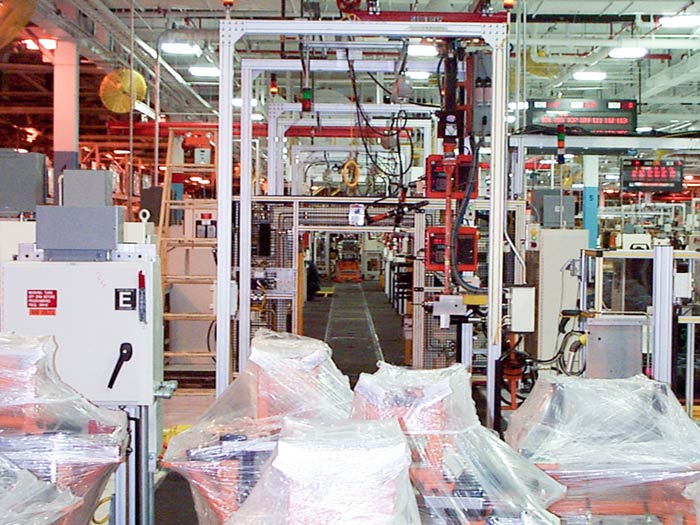 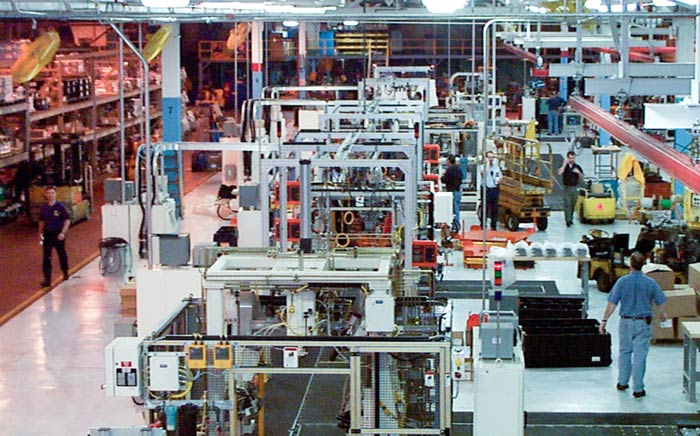 The main in the picture above is a mechanic and a deer hunter named Joe. When they set it up, they ramp up very slowly - trying to make one engine the first day, then a few the second day, and so on, finding any problems as they go along.

Below: looking north towards the tool room, where the V6 line is now. 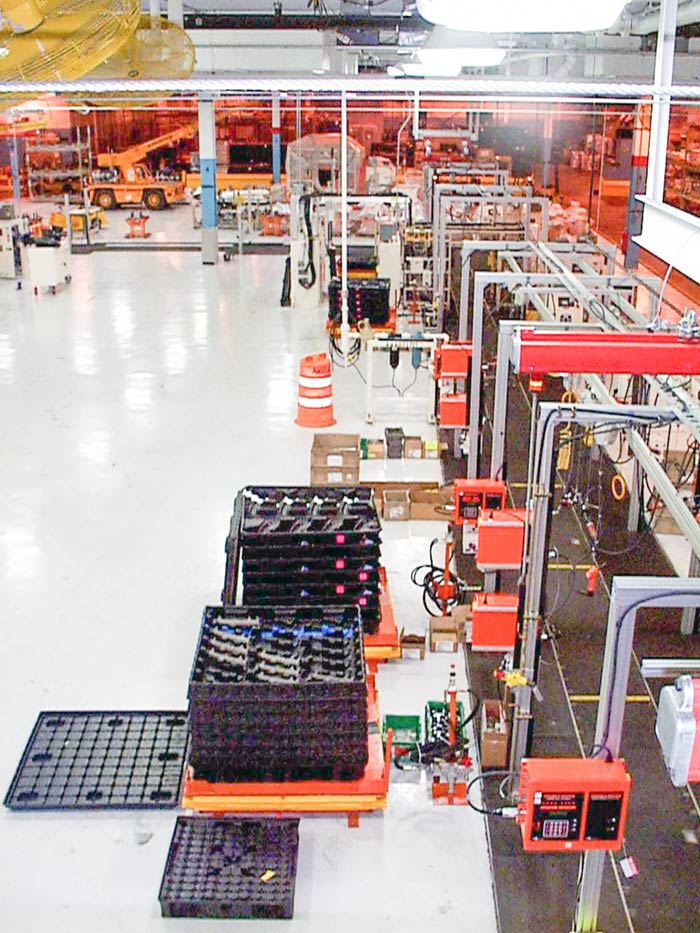 Department 624 was a machining line that made 3.3/3.8L cylinder heads; as I recall, there were two identical lines next to each other. 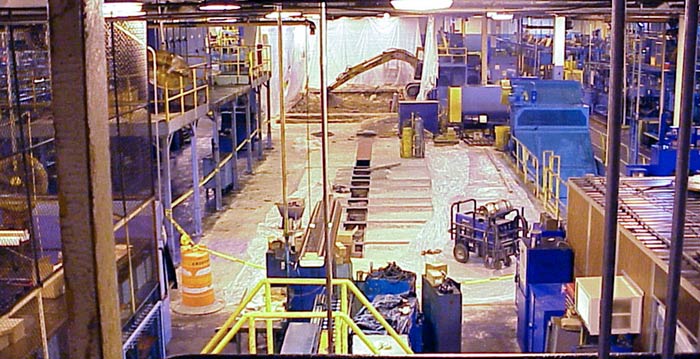 Joseph F. Lamb made much of the tooling: when they made the equipment, you really didn’t have to worry about much. They went out of business, though. 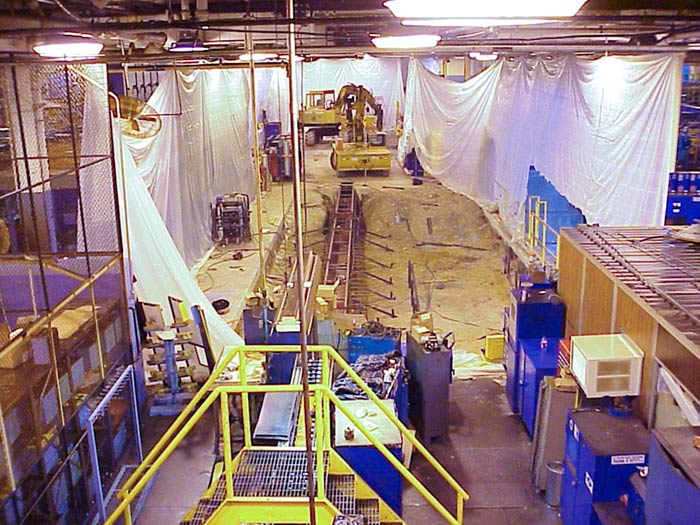 When they really got rolling, around 2000 or a little later, they added Department 724, because the 624 line was aging and they needed more volume. They ended up shutting down the outside loop of 624 and using the inside loop. They had some identical machines, though, so when 724 had problems, they could the old 624 for parts. This area used to be made for slant six rods. They were set up for a volume of connecting rods maybe double what the assembly line could do. 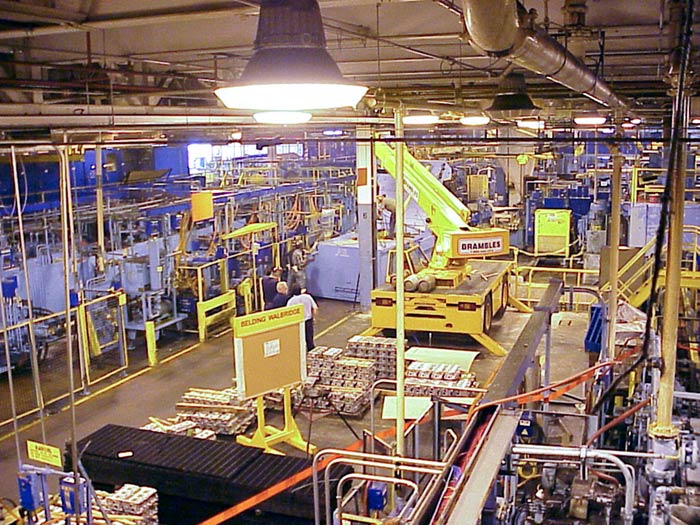 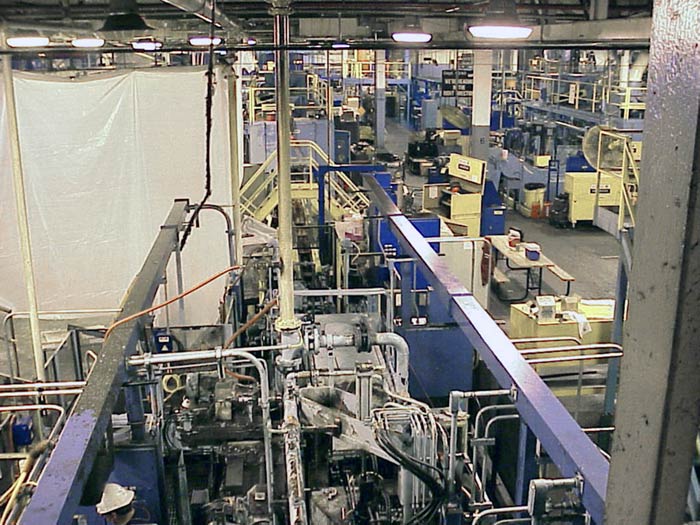