This 1955 DeSoto Fireflite has been sitting in a driveway in Rockdale, Texas since I spotted it at the start of this year [2022], maybe longer. It seems to be a prime candidate for restoration, as the 2-door hardtop body type is second to only the convertible in collectible value. Plus, it’s one of the most attractive designs of Virgil Exner’s Forward Look.

But it’s the last year of the 6-volt electrical system in De Soto, and the only year of the 291 V8 engine (bored 15 cubic inches over the make's first V8, which was introduced in 1952), so finding the parts to keep it original may be a challenge. It has California plates; from what I’ve heard, it was driven to Texas long ago and parked in a storage building behind the old police department. After the police moved, the old property was sold, and the car’s current owner (a grandson of the original owner) had to move it before the storage building was razed.

The body looks straight, and the chrome seems complete. The toothy grille is the final variation of the DeSoto theme started in 1951, and sits between “floating” turn signals. This was the first year for the Fireflite, which bumped the Firedome from top of the line to entry-level, and knocked the lower-selling, six-cylinder Powermaster out of the lineup entirely.

In both Fireflite and Firedome lines, the hardtop was called Sportsman. They were essentially the same, riding on a 126” wheelbase with a total length of 218 inches; the Fireflite had upgraded trim, plus the 4-barrel version of the 291 engine, boosting brake horsepower to 200. The color sweep side panels were standard on the Fireflite Sportsman and convertible, optional on all other body types.

Chrysler Corporation produced roughly 40,000 more 1955 De Sotos than 1954 models; this was one of 10,313 Fireflite Sportsman hardtops to leave the factory, with a base price of $2,939 (almost $300 more than the Firedome Sportsman), according to the Standard Catalog of Chrysler. Total 1955 De Soto model-year production was over 115,000; DeSoto made more than twice as many Firedomes as Fireflites, while Firedomes had outnumbered the entry-level Powermasters in the 1953 and 1954 model years. Production numbers were higher than in 1954, but below 1953 and 1950; two of the “stodgy” years had outsold the first year of the “stylish” DeSoto. (1951 and 1952 model-year production was grouped together and impossible to separate. Calendar year production for 1955 was higher than for 1951.)

Since the end of WWII, the top-of-the-line De Sotos had come with a standard semi-automatic transmission until the 1954 models. Those reverted to a standard three-speed manual, with an optional ($108) overdrive gear. The overdrive made a real difference on fuel economy, especially during highway driving. The other transmission option was the two-speed PowerFlite automatic transmission, with its shift lever in the dash panel ($189). This setup cost $48 less than the old Fluid Torque Drive semi-automatic, last seen in 1953, but was slower than the manual transmission; fuel economy was about the same. 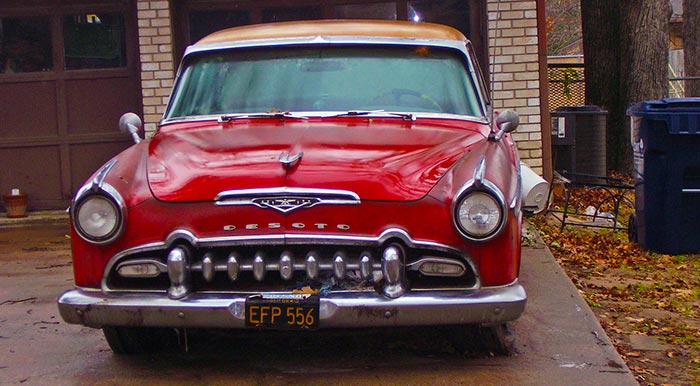 The option prices seem miniscule compared to the cost of a full restoration. I’d like to see the De Soto being driven again, but I wouldn’t mind it not being seen at all for a while—so long as it’s being worked on inside of a garage or shop. Leaving it out in the weather isn’t improving it.

These photos were taken from the same angle taken at separate times over the course of months. The driver’s side profile was from across the lot of the corner house next door, to give you an idea of how limited my photographic angles are. The later photos were taken with the hubcaps off; it was sitting on blocks with the wheels off for a month or so (maybe for a brake job?), and when the wheels were put back on, the hubcaps weren’t. 1955 DeSoto hubcaps were unique to that year, and had an embossed “DeS” logo—and it appears that the car had those special pieces.

As John wrote, the final year for six-cylinder DeSotos was 1954—since V8s were now essentially de rigeur for upscale marques, and DeSoto was slotted above Dodge. The FireFlite was new for this year, with a fairly high performance 200 hp first-generation Hemi V-8 engine topped by a four-barrel carburetor. Automatic transmissions were shifted using a “Flite” lever on the dashboard. Respecting the public’s desire for “long, low, and sleek” cars, DeSoto increased their wheelbase, which had been 121.5 inches since 1949—but they only lengthened it by half an inch. At the same time, DeSoto dropped its extended-wheelbase sedans, which had mainly been built for the taxi industry—which was now mostly using standard sedans, which were far cheaper.

Looking at some Chrysler-sourced, black-and-white photos of the DeSotos over the years (one car per year) shows that the move from “stodgy” to “fashionable” was more gradual than one would think from the “Forward Look” campaign—though 1955 was still a leap forward. That’s not to say it was not a major transformation, costing roughly $100 million dollars across the company and making the cars look quicker—which they were—but Virgil Exner kept a number of DeSoto’s design cues even as he moved them forward. Reducing the rear fender and hood bulges and adding the color sweep side panels, in particular, made it look much sleeker (to the point where one wonders if the company needed a new body to modernize the DeSotos).

The 1955 DeSotos were a work of artistic genius—carrying forward past design cues even as it moved the car’s styling into the vanguard, and lending it an atmosphere of leaping forward even when it was standing still. The ads certainly emphasized the high style of the cars, though the brochures, once finished praising the looks, did dive into the engineering features. 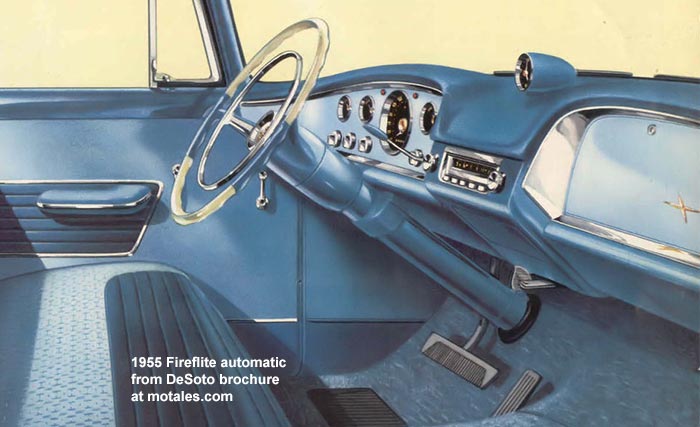 The technologies were interesting; the Hemi engine design was introduced in the 1951 Chryslers, and it produced a good deal of power for its size, but was rather expensive and slow to make. Each division (except Plymouth) had their own versions, with its own internal parts. DeSoto had one displacement for 1955, but in two states of tune, with the Firedome producing 185 bhp and the Fireflite good for 200—both on regular gas; the Firedome had a two-barrel carburetor while the Fireflite had a four-barrel. Rated torque on the two cars was 245 and 274 lb-ft, respectively. (These numbers are all “gross,” not directly comparable to today’s engines.) Compression was low by modern standards—7.5:1 on both Firedome and Fireflite.

The name and trademark “Hemi,” incidentally, were first applied to the big 426 engines—and only retroactively applied to the company’s original hemispherical-head V8s. At the time, engineers called them “double rockers;” Chrysler called theirs FirePower, DeSoto used the terms Fireflite and Firedome, and Dodge used Red Ram and Super Red Ram. 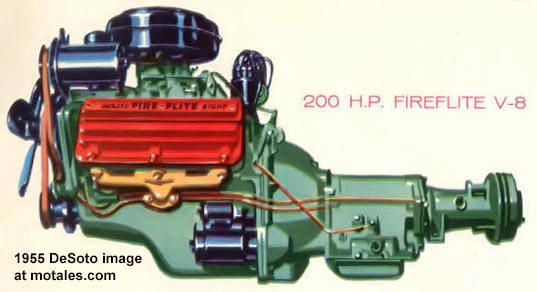 The “banjo” axles were an almost antique design which would be replaced in the early 1960s. While Chrysler was the first with a standard alternator, on Valiant in 1960, DeSotos had to wait until 1961. Electronic ignition was still over a decade away, in 1972; the Fireflite had dual breaker points for ignition, which needed cleaning and adjustment on a regular basis. Spark advance was done via vacuum and mechanical means. 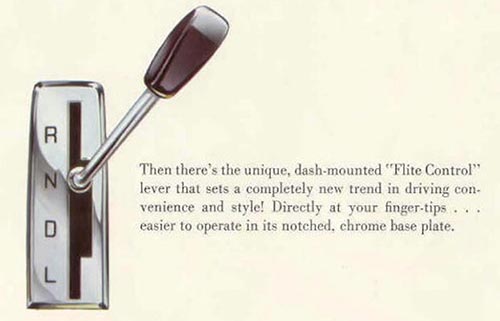 The only fully automatic transmission was a two-speed which did not use the car’s power well; the Chrysler three-speed had not been developed yet. It did have new tubeless tires, electric windshield wipers, resistor plugs, power brakes, and bonded (rather than riveted) brake linings.

The DeSoto Sportsman was around 218 inches long, on its 126 inch wheelbase. That made for a massive overhang, which was good for the car’s looks but not for its performance—but that was normal for Big Three cars of the day. By comparison, the 2023 Dodge Charger and Chrysler 300C sedans have a 120 inch wheelbase; the Charger is only 198 inches long—a full 20 inches shorter than the DeSoto—and the 300C is 199 inches long.

Overall, it was an elegant yet sporty looking car; equipped with the overdrive manual transmission, it was quite a nice vehicle.