How would you promote your new business? In the case of Big Al’s Pizzeria, you would place a 1949 DeSoto with your business’ sign on each side of the car, near the road where everyone driving by could see it. The ploy must have worked; though the car was moved elsewhere during the summer, the business remains open. 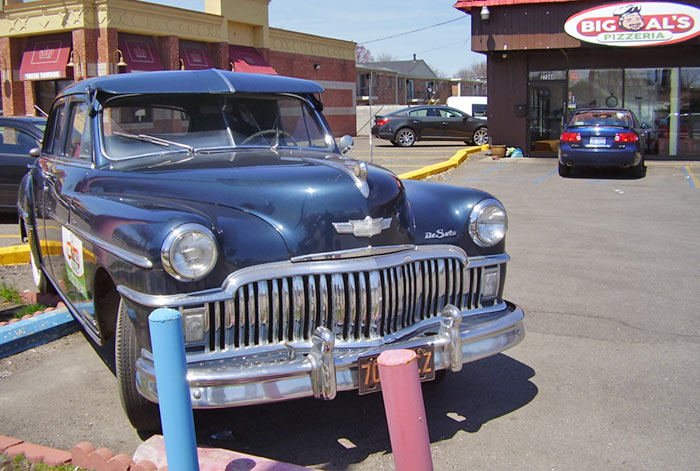 The driver’s side rear-door window was either missing, or wouldn’t roll up. Otherwise, the car’s exterior was in excellent condition.

Big Al’s is on Ford Road, near its intersection with Inkster Road in Dearborn Heights, Michigan; it opened during the early weeks of Spring 2018. When I went inside to ask permission to take pics, only one employee was there, and he was busy making a pizza, so I decided against disrupting production. As a result, I didn’t take any interior pics, or see the condition of the engine and inside of the trunk.

This was the “Second Series” 1949 model; the first series was an extension of the post-WWII models, introduced for 1946 and produced through February 1949. The redesigned DeSoto was introduced on March 1, 1949. Marketed as “The car designed with you in mind,” it rode on a 125.5 inch wheelbase, which was 4 inches longer than the previous models; but the total length was half an inch less, which should have improved handling as the wheels were pushed to the corners. Otherwise, the car looked mildly evolved from the previous years.

DeSotos came in two models, Deluxe and Custom. Despite its definition as luxurious, elegant, and/or expensive, the Deluxe was at the bottom of the line, as it was for too many “luxury badged” cars of the day. Custom means specifically made to order, which shouldn’t apply to a mass-produced car and definitely doesn’t describe the 1949 DeSoto. 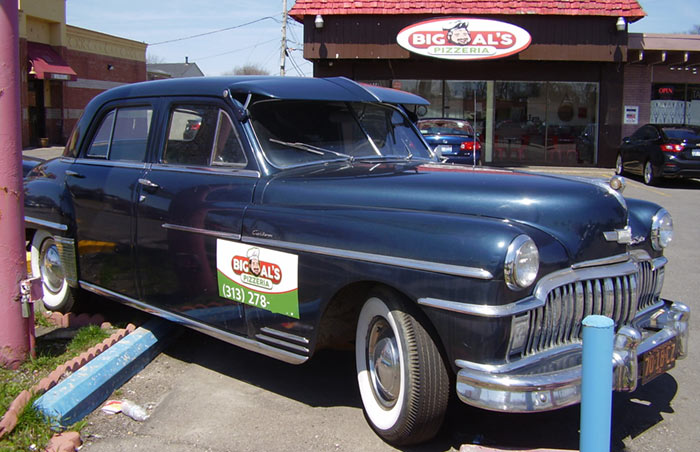 Differences between the two models were minor; the Custom had two short chrome strips on each front fender aft of the wheel opening, which makes this car a Custom. It also had an upgraded interior. Fluid Drive, Chrysler's semi-automatic transmission, was standard in the Custom; it was a $121 option in the Deluxe. The exterior sun shade was a factory option.

A 236.7 cubic-inch straight 6-cylinder flat-head engine should be under the hood, as it had been since the 1942 models were introduced (and would remain through the 1950 model year). For 1949, output increased to 112 brake horsepower, from 109 bhp since 1946 (the engine was rated at 115 bhp for 1942). It had a Carter Ball & Ball one-barrel carburetor. Its compression ratio was 7.0:1. This was a sturdy engine with a torque bias and, especially with the Fluid Drive, unexciting acceleration. 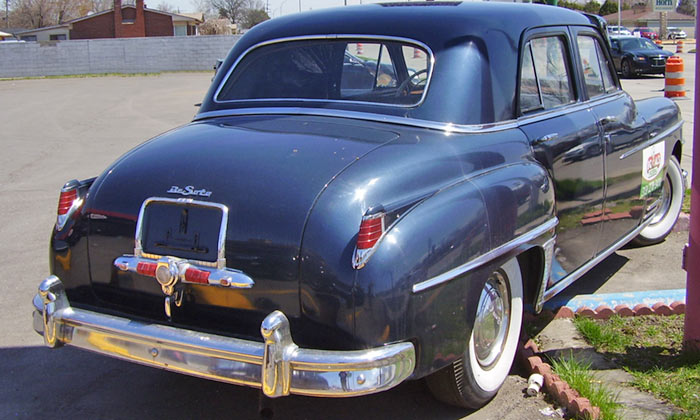 According to The Standard Catalog of Chrysler, 48,589 Custom 4-door sedans were produced for 1949, more than half of the entire DeSoto production of 94,371 (including 471 Custom models in the longer 139” wheelbase favored by cabbies). However, the 1949 production totals may have included the first series, so output for the new model may have been lower.

The car was similar for 1950, and the platform was used through the 1954 model year though engines were upgraded, starting with 1951 models. The factory price for the 1949 Custom four-door sedan was $2,059; its shipping weight was 3,645 pounds.

The Standard Catalog lists 680 Deluxe models produced as taxi cabs. This was part of a trend, as DeSotos were ubiquitous as taxicabs through the first half of the 1950s, both in real life and in the movies. They would also have made sense as pizza delivery vehicles, had they existed back in the day, since they had a reputation for reliability. As it was, it made for a memorable promotion. I wish Big Al’s Pizzeria continued success.